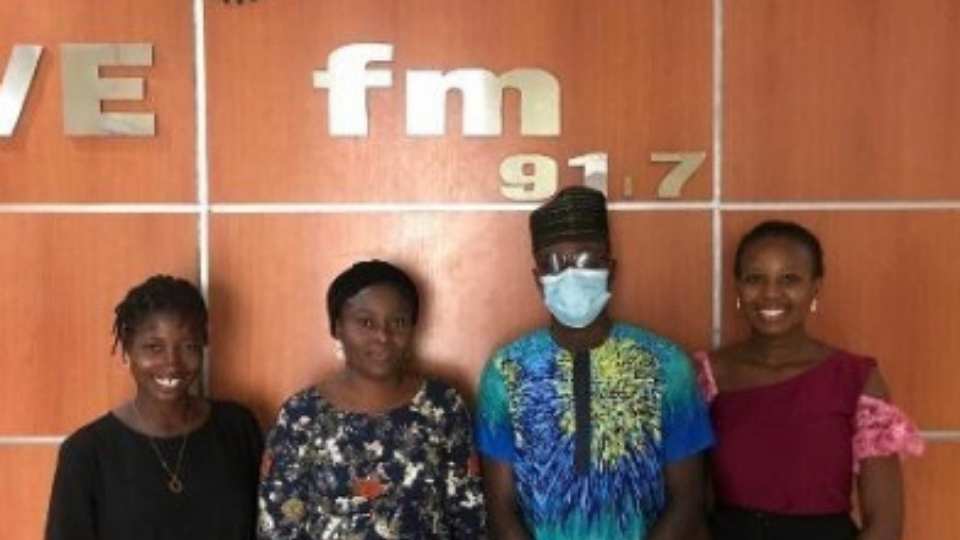 Busayo Soyebo held a very interesting radio show which reached over 1,000,000 listeners directly. Callers asked questions that highlighted that more needs to be done to communicate to the wider population: an uncut girl is a healthy girl and is able to be a part of society without bearing the everlasting effects and pains of FGM.

The FGM special broadcast’s main aim was to create awareness of “Easter cutting” since it was a festive period and most people tend to travel to their ancestral home for the very first time during this season. The broadcast was to draw attention to FGM and also to make listeners realise that holiday time should be a safe time and not a time to think of mutilating their girl child.The special programme was held on the 3rd of April, 2021 at 5:30 pm. We hosted three guests and a GMC graduate.

Ayoola Omolara who is a Midwife and experienced nurse for the past 25 years, Girl child advocate Ireoluwatomiwa Shaniyi, and Barrister Abimbola Akinyemi were the guests on the radio show.

Ireoluwatomiwa Shaniyi explained Female genital mutilation in detail. she explained that the clitoris is one of the most sensitive parts of the female organ, cutting this organ off is more like cutting out the organ, enabling pleasure for the girl child. Women from the age of 15 – 49 years are affected in Nigeria with a percentage rate of 18.4 and for a younger girl below 15, the percentage is 25.8. Ireoluwatomiwa also explained why it is still striving in secrecy, She said usually communities see it as a form of accepting the child to the community especially in the religious communities like Ede North and South.

Mrs. Ayoola Omolara, the midwife also added from her experience as a midwife that the practice is tagged with a celebration such as Christmas, Easter, Eid Kabir, Eid Fitri, and many more. The local circumcisers are readily available to perform this act on girls. In most cases, it is done at the early stage of a girl when they couldn’t differentiate between good or bad. They decide on the behalf of the girl child. He also explained how the infection has been passed from one generation to another generation through the ancient unsterilized knives that are always used to perform FGM.

This infection can affect the genital tract of the young girl, plaster the line-in of the womb and this may affect the procreating of the young girl later in life. He talked extensively from his field of experience. The programme was a mixture of both English and the local language (Yoruba) He gave a broad explanation of Female Genital Mutilation and emphasized pain during childbirth. He explained the medical implication of Female Genital Mutilation.

Some of the short and long term effects as thus:

Barrister Abimbola Akinyemi also shared her experience so far as a human rights activist and a law practitioner. He explained why there has been no one apprehended as a perpetrator of Female Genital Mutilation. He said the offense has become a community offense no one is ready to report a circumciser nor a parent that willingly surrenders their girl to be mutilated. He explained how the law should be work but the communal issue is affecting the implementation of the law but advised more advocacy before beating the big sticks.

Question asked on the show:

All questions were answered both in the local dialect and English language for better understanding.

The short notice made it difficult to get a slot at the radio station because all their programmes had been lined up for the day as it was a day of the Girl child.

The Pastor that was supposed to talk about the belief of Christians and their stand on FGM had a minor accident; this made him missed the program.

Urine leakage can also be caused by FGM

Itching of the genital has nothing to do with FGM, proper hygiene will help our baby girls to live free from infection.

Tweeting live on Twitter and other social media reached more audience that was not privileged to listen to the radio program.

Local language made more people participate in the program.

It was observed that that population believes that the campaign against FGM is a way of incorporating foreign culture.

It was noticed that all the callers on the program were male, which further proves the fact that women still shy away from Female Genital Mutilation conversations.

The population is still scared for the future of the girl child if she does not undergo FGM.

Community members are scared for the future, they want to know if there will be no reason to say FGM is the way later in the future

Community members now prefer the medicalization of FGM, they think this is hygienic and safer