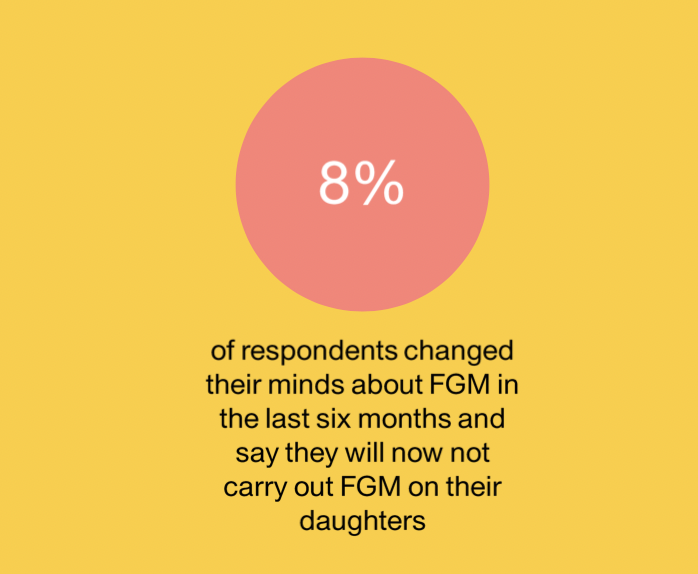 Abstract: We set out our approach to measuring the effectiveness of our strategy to end FGM. Timely evaluation of what we are achieving also enables us to reinforce good approaches and modify bad ones. We also recognise our Funders need to make a judgement on how effectively their donations are being used. GMC uses a mix of micro and macro approaches to achieve these goals – including hard data derived from regular surveys conducted by the International impact measurement agency – 60Decibels.

“Do you have a list of the names of the girls’ GMC has saved from FGM?”

This was the tough question posed by a potential Funder recently.

Let’s remember, FGM as an issue is very personal, very sensitive, often illegal and often carried out ‘in secret’.

Getting raw data is not as easy as, for instance, counting Covid vaccines given out.

But as a charity seeking funds we recognise we do need to try and quantify our beneficial impact. After all, for a Funder the point of evaluating competing charitable projects is to steer money away from those that ‘do not work’ – towards those ‘that do work’.

So our initial response to our potential Funder was;

We mentioned that there were clear breaches in dignity and data protection in collating such information. And then, there is the not so small matter, of how we can possibly know all the names of the girls who are not cut because their, yet to be married parents, saw one of our activist campaigns and decided to not cut any of their future offspring?

With those points made, we then said we could try and get some idea …

So, we asked our WhatsApp groups of activists, centred around each of the 8 countries we operate in, to tell us of specific cases they know about.

We quickly received many responses. It was an invigorating experience.

Here are two of the personal responses, in their own words, received last week, with full identities concealed:

“Bendu of Kenema, Sierra Leone, was trained with support from Wallace Global Fund through the Global Media Campaign. She was very brave and outspoken during the training and in her contributions and shed tears after the sessions. Ten days after school was closed, Bendu’s parents invited a Sowei (traditional cutter) to cut her and other children from her neighbourhood. She was confronted by her mother but Bendu refused and used her knowledge from the training to convince her peers not to accept subjection to FGM. She asked her dad to choose between her education or initiation.”

“A Teacher in Kenema, Sierra Leone wanted to help his aunt to cut their children this December, but after listening to an FGM discussion at SLBC Kenema he changed his mind and also made her listen to the Campaign Team on Radio to know the dangers of FGM.  She has made up her mind and will not cut them… and she is even ready to join the campaign team.  So the GMC campaign against FGM has helped this woman and her family so much”.

On top of these very personal testimonies in macro terms we know the trend line for FGM is dropping, in the countries with nationally representative prevalence data, from “one in two” girls aged 15-19, to “one in three”, in the last 30 years (source: UNICEF).

Furthermore, the rate of reduction has speeded up significantly in the last 5 years, the period GMC has operated, to a rate of nearly 13% (workings: 5% / 39%).

For the countries we operate in, such as Kenya (which has representative data), this will amount to many thousands of girls saved from the brutality that is FGM.

Naturally, we do not claim that this ‘success’ is wholly down to GMC and our 1000+ activists. What we do suggest however, is our approach aligned to other national and local activities combine to create a compelling narrative that can and is changing minds and actions – when it comes to saying ‘No to FGM”.

So in ‘macro’ terms we are helping to change the dynamic around FGM.

And as can be seen by the personal testimonies we are impacting individuals lives directly.

But what other data-driven evidence do we have to measure our impact?

Simply put, we want and need to know the extent that people are being:

Are thus changing their minds about FGM

Our latest ‘flash’ survey from Mali was conducted by 60Decibels in August/September 2021, on behalf of our funder the World Bank.

It followed on from a ‘baseline’ survey conducted in February 2021. So it is measuring the impact of our media campaigns in Mali after only 6 months.

In only a 6 month period – the 3 standout statistics were:

83% of these people had been influenced by (our) media campaigns

100% of those also said knowledge of the medical risks, from the media, contributed to them changing their views

This graphic shows what were the main influencing factors in people changing their minds. The strength of the medical dangers of FGM is striking:

We should point out that in other regions and with other types of GMC campaign, there is a bigger focus on ‘Religion’ which then tends to play a bigger part in “changing minds”, than indicated above. Our TV and radio jingle campaigns in Mali did not focus on religion as much as medical dangers. What this survey demonstrates is that our key messaging does cut through and quickly.

The full report by 60 Decibels can be accessed here:

Taken as a whole, on a macro and micro basis, we believe there is a strong set of holistic data that indicates GMC’s strategy is making a significant difference in the lives and futures of many girls.

That all adds up to the one simple fact:

Less girls are mutilated by FGM as a result of GMC’s work.

And when it comes to “Return On Investment” (ROI) (an ugly term given the issue, but one Funders recognise) we know that the UNFPA uses a range of $2 to $56 spend to ‘save’ a girl from being cut, in ‘high FGM incidence’ countries. Our own guideline figure based on our work in Tana River, Kenya is  $31.50, so well within the same range.

Taken together we believe this micro and macro analysis indicates we are both strategically effective and cost effective in using our Funders money to bring about the timely end of FGM.

“The way GMC works is Fast, Efficient and Cheap”

In 2020 more girls were “at risk” of mutilation by FGM, than the entire population of cities such as Paris and Los Angeles