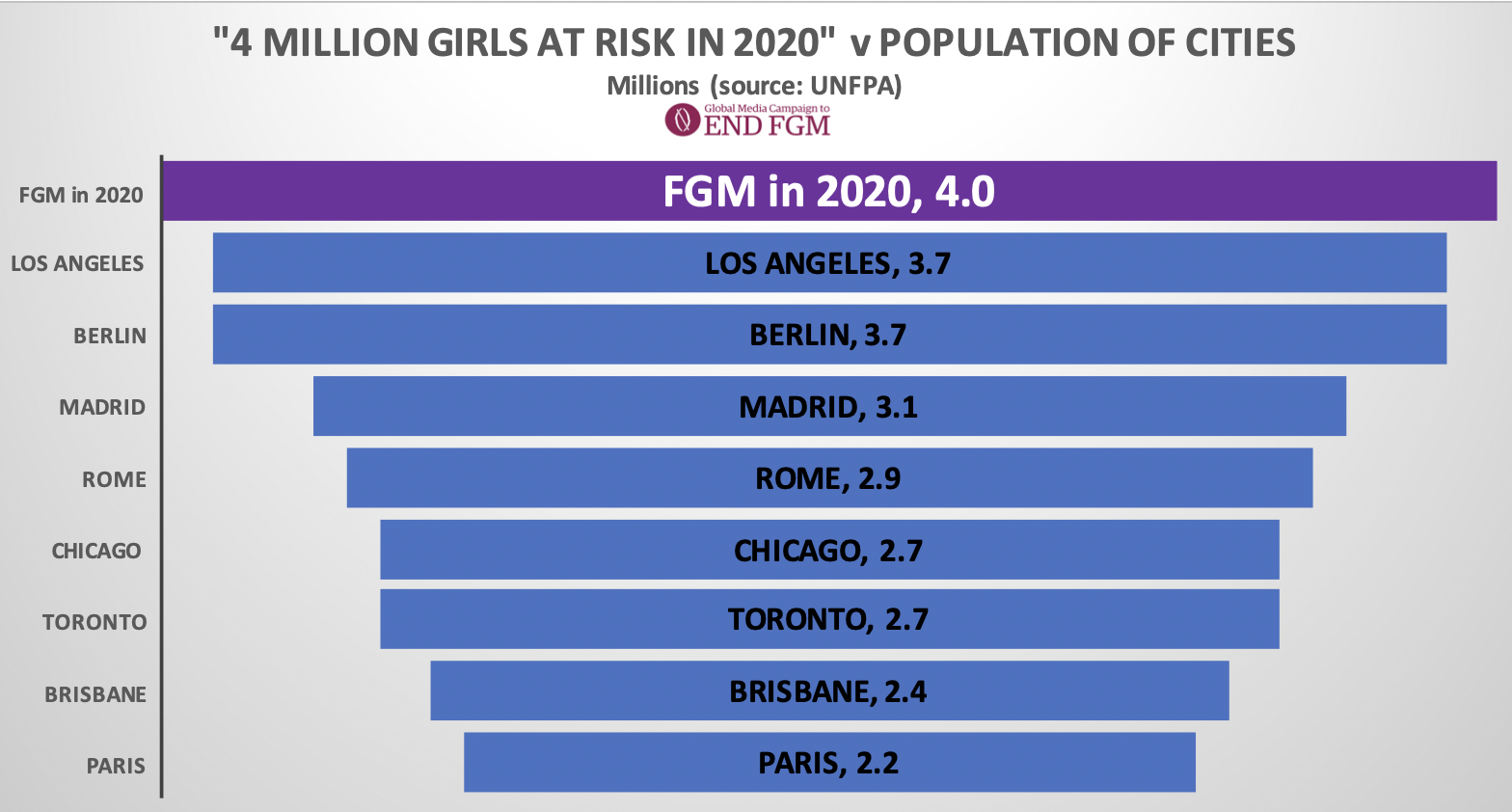 Breaking News: UNFPA confirms; “4 million girls were at risk in 2020”

That is more than the entire population of cities such as Los Angeles, Paris, Rome, Berlin and Chicago.

To repeat the entire city population of these cities …

So what are we doing about this staggering figure?

We at GMC are committed to ending FGM by 2030. And we feel recent events in Washington, USA suggest our goal is now more attainable – even earlier.

As background, our simple GMC strategic model is based on empowering activists to change minds and behaviour in their own communities, where FGM is practiced. We have over 500 activists now – most are ‘survivors’ of FGM.

We train them in media skills at our ‘media academies – and give them small campaign grants.

They then use their knowledge, passion and drive to get onto radio, TV stations to spread the anti-FGM message. Working with community  ‘Influencers’, such as religious leaders and doctors – they can start a conversation that can lead to people changing their minds about FGM.

And our strategy works .

But ultimately the passion and drive of our 500+ volunteers are not enough to end FGM by 2030.

We at GMC also need funds to pay for;

In Vice President Kamala Harris and Samantha Power (President Biden’s USAID Administrator nominee), we now have strong advocates for women’s rights and an end to FGM.

This is what they have said;

Do we want to grow a developing economy? Make sure women can contribute the same as men. One study estimated that if women around the world could participate equally, it would add $28 trillion to global GDP by 2025. That’s the GDP of the U.S. and China combined. That’s real money.”

We agree with VP Harris, and as we know FGM and child marriage are joint precursors to an abrupt ending to school, for many millions of girls.

A study in October 2020 by Citibank and Plan International supports the relationship between girls education and growing GDP, that Vice President Kamala Harris talks about.

And then we have this from Samantha Power;

These are very reassuring words.

We hope 2020 marks the low point in the number of girls “at risk” across the globe.

With powerful supporters of women’s rights in the Biden Administration we at GMC believe the momentum is with us to reduce these appalling numbers dramatically – and end FGM by 2030.