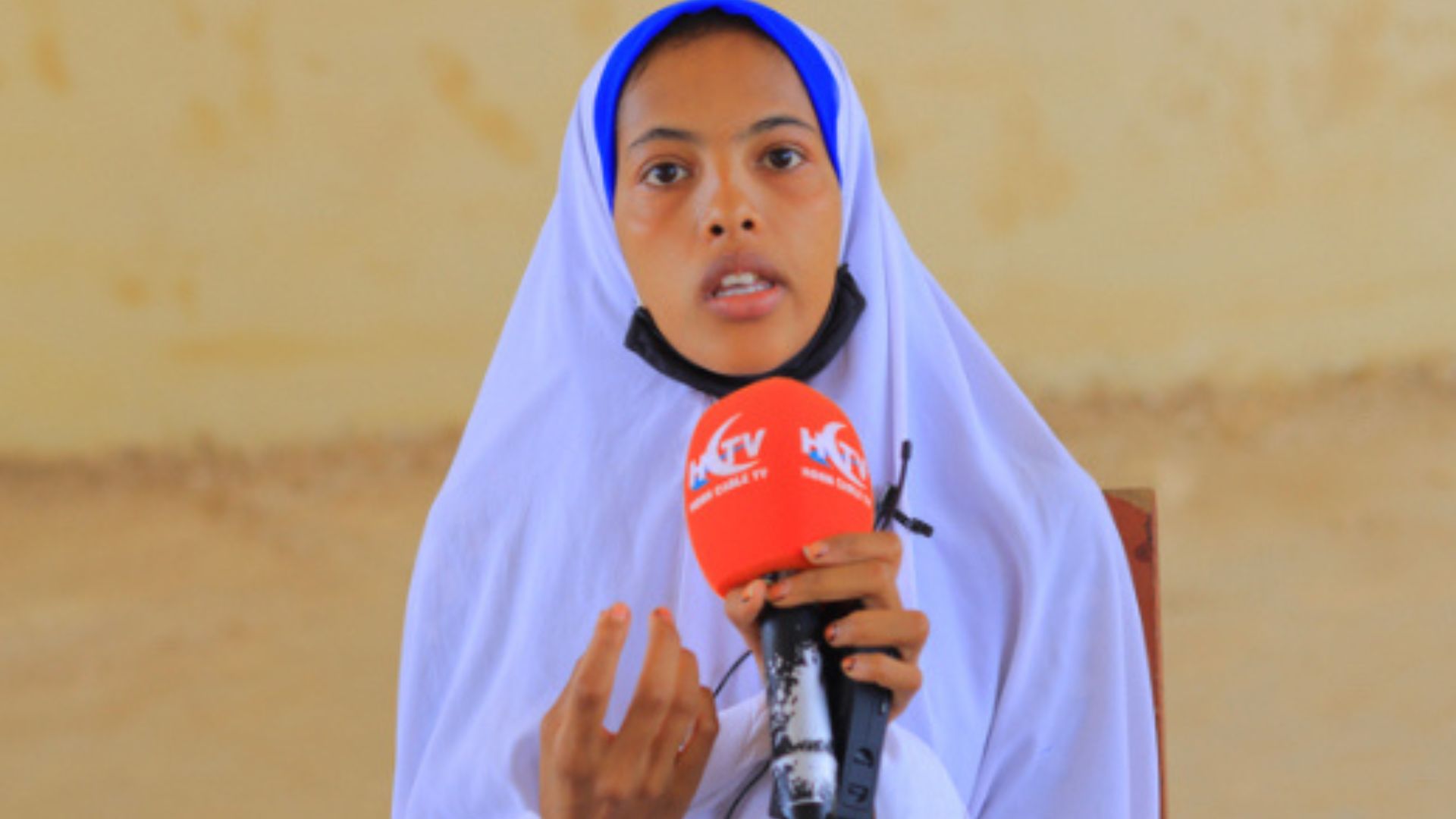 Powerful messages from students that are inspired to take action to help end FGM.

Shucayb Obsiiye, is a Somali professional journalist based in Jigjiga who has worked with some of the main media houses in the region for the past years. He currently works for Horn cable TV in the Somali region of Ethiopia. In addition, He is one of the journalists who write on social media from the Somali region in Ethiopia country.

• Horn cable TV is one of the most widely watched Somali TV which has millions of viewers and supporters across the Somali nation and reaches all Somali territories in eastern Africa and beyond.

• This Television facilitated our media campaign to reach millions of the Somali population who need to get awareness about the negative impact of FGM and its side effects to end FGM in the Somali region and that is the reason we selected this TV channel.

Shucayb conducted a School media campaign most highly populated four secondary and preparatory schools in Jigjiga city. These schools were:

On the First week we started the school media campaign at Jigjiga Community Secondary and Preparatory School.

Director Abdulahi welcomed the media campaigners with open hands and narrated to his students that he has never supported conducting FGM and he will never support it because it is an act against humanity. Abdulahi also told the students :

“I encourage students to fight against FGM to keep away from this act. Please share the information with the other students who did not get this precious opportunity to participate.”

“lack of awareness brought these problems.”

“the only way we can end it is by encouraging marrying non-circumcised girls.”

"I believe that this act can be eradicated if the parents and school children get enough awareness media campaigns and know more about the real problems of FGM rather than the fake social beliefs." Samira Ali Sayid grade 12, Somalia… Click To Tweet

Dr. Akil presented some of the solutions to end FGM and said that:

“We need the active role of the Islamic scholars, educators, and young students to end FGM.”

Islamic religion prohibited conducting FGM, or harming women’s bodies because Allah gave prestige to all human beings, women are made like queens, and taking as evidence the narrations of Prophet Mohamed said the Jannah (paradise) is under the heels of the mothers.

At the end of the program the election of anti-FGM committee members of Jigjiga Community Secondary School was held at the school Hall. The election process was conducted in a very fair manner.

“I am ready to implement this program and lessons, I am planning to share what I learned here with my colleagues, families, and friends and tell the parents what they did during their ignorance.”

“As girls, we always meet many problems with FGM and we are ready to give awareness to the next future girls after us to know more about what we have learned from here.” Siman Ahmed grade 10, Somalia region, Ethiopia Click To Tweet

“Therefore, as students, we are ready to take on our role and pass the information to all students and friends as much as possible.”

At KAAH (2) Secondary and preparatory school.

FGM is a very painful and traumatic harmful tradition that young girls like me can feel since we have experienced the pain and the damage during our lifetime. For that reason, Umalkayr advised young girls and boys in the school to raise their voices to end FGM and transmit what we have learned here today to other students who did not get a chance today as well as other community members.

“I found out about the health problems of female genital mutilation (FGM) which I used to think was just like boys being circumcised and girls being circumcised." Abdiwahab Ahmed Grade 12, Somalia Region, Ethiopia   Click To Tweet

“I also found out that Islam strongly opposes this practice. As a student, I will begin by raising awareness and stopping this at our home, family, relatives, and Clans until we reach other community parts.”

“I will be the first one who will try to stop FGM, starting from our home, family, neighbours, and so on.”

We are very delighted that the media community has come to our school to carry out this awareness campaign.

“As a director, I am suggesting you transfer the lessons learned today to other students at school, in your, Families, neighborhood, and the community as a whole.”

The success of the Schools Media campaign: