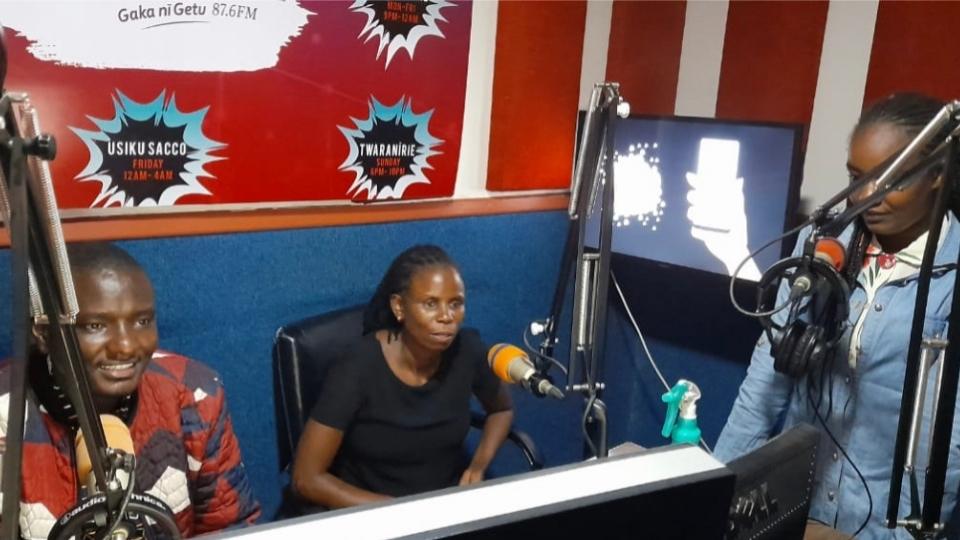 Tony Mwebia is an anti-FGM campaigner, he recently organised a radio show helping to sensitise the community in Meru County, Kenya.

In my project, I took influencers to Getu FM radio station to sensitize community members drawn from Meru, Tharaka Nithi, Embu, and Isiolo Counties on how to best protect our girls from FGM and child marriage during the long Easter holidays.

I engaged a youth activist, a university student, an elder, and a religious leader in the radio talk show. These are key stakeholders and gatekeepers in my community. They are opinion shapers and have great influence when it comes to addressing FGM, Child
marriage, and other forms of Sexual and Gender-Based Violence.

The Ameru Council of elders are highly regarded in Kenya and they have been involved in key national decisions
by the president.

The project was very successful and the engagement was very informative. Getu FGM has a cumulative reach of more than 1.5 Million listeners drawn from Meru, Tharaka Nithi, Embu, and Isiolo counties.

The show was held at a prime time between 7.30 PM to 9.00 PM when the majority of the listeners are tuned in after the day’s work. We had several callers dialing in and asking questions which made the show very interactive.

One caller put the elder to task to explain why the prevalence of FGM is still high in Meru County despite the Ameru Council of elders making a public declaration against FGM in 1956 and the same being re-affirmed in 2009. The elder explained that FGM is a social norm and cultural norm that requires constant dialogue to end.

Public declarations should never be mistaken to mean an end to this practice but the beginning of the campaign.

He insisted on the need for more sensitization to community members especially via vernacular radio stations and TV stations to ensure everyone got the message on the need to eradicate FGM.

Another caller challenged the panelists on the increased reported cases of Sodomy. He wanted to know what was being done to counter this issue. In response to this Tony Mwebia explained that these cases have previously existed but there was little or no reporting being done. He insisted on the need for parents to ensure a close relationship with their children and encourage them to report any cases of people touching them inappropriately

Alice the university student touched on the need to actively engage young people, at the End, FGM conversation. She pointed out that young people are the main culprits of FGM, child marriage, and teen pregnancies and they needed to speak up to achieve a generational changes.