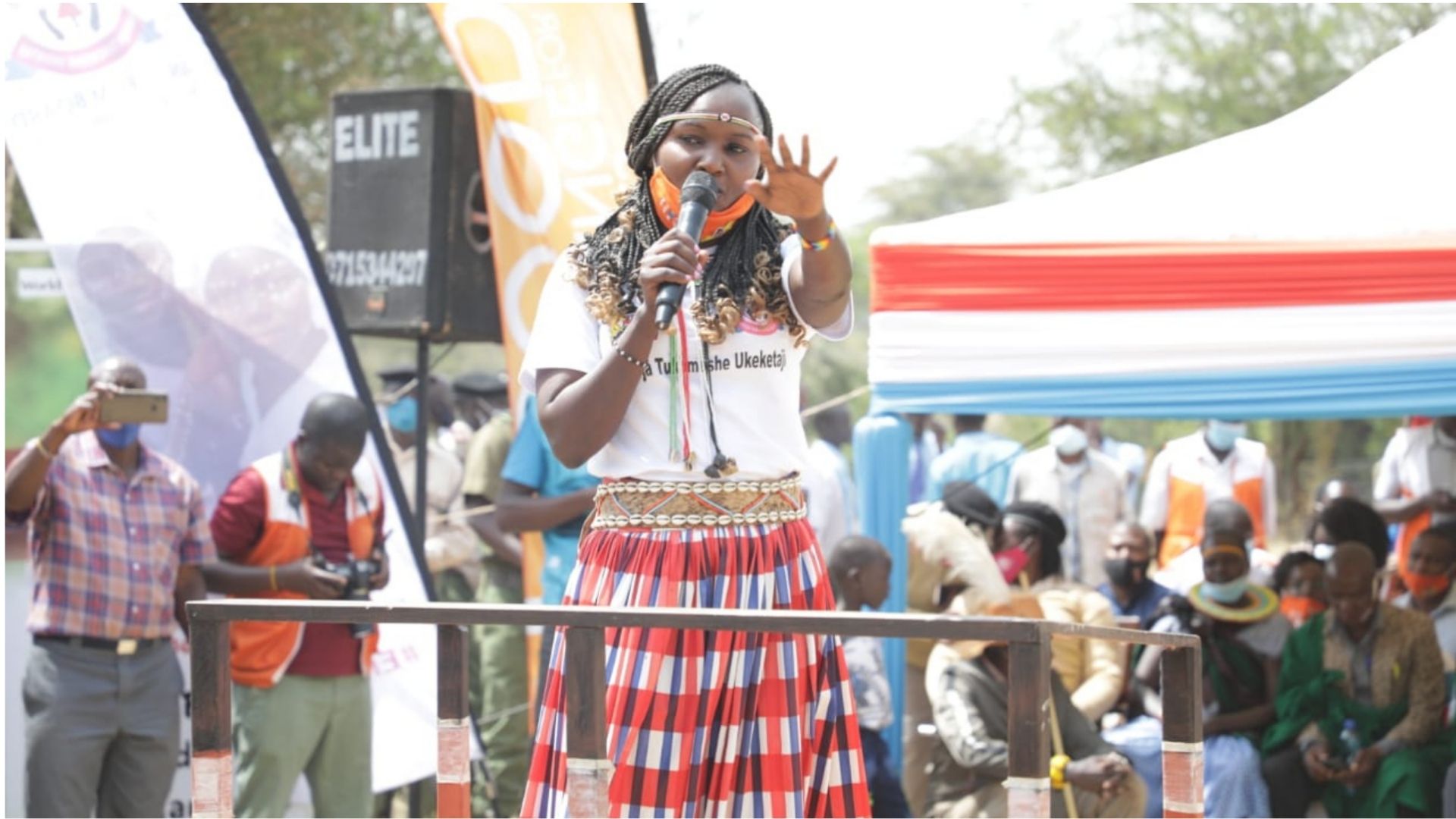 The recent celebration for the international zero-tolerance day was celebrated in West Pokot County as part of the national rotation across the 22 FGM hot spots counties. I _Rep foundation was privileged to co-host the series of events together with World Vision Kenya and the anti-FGM steering committee.

The organization participated in a public gathering at Cheptuya location which brought together an estimated, 500 people. The activity started with a roadshow around Cheptuya market being a market day. Among those present were assistant county commissioners, anti-FGM board officials, different county and national government officials, chiefs, assistant chiefs, and members of the public. This event trended on social media and was covered by local radio stations namely; North Rift and Kokwo radios.

This event ran alongside a radio talk show on Kokwo radio to educate members of the community. Present were Anti FGM board official, Police officer commanding station, and myself.

The group later joined on a market roadshow. This activity mobilized large crowds of people who followed the roadshow from one end to the other being the first roadshow ever while listening to the messages. Onboard the roadshow were two renowned local artists who did not only entertain using their anti-FGM songs but also educated members of the public in turns. The activity took place in Alale the border of Kenya and Uganda.

The organization hosted a group of 60 young people, 30 from across the FGM hotspots counties, and 30 from West Pokot, who form part of the Youth End FGM network. The team converged at Horizon hotel in Kapenguria to share end FGM campaign experiences and to learn best practices and approaches. There were maximum social media and media coverages for this event. It was also attended by high-level dignitaries, Hon Rachel Shebesh, chairperson and CEO of the anti-FGM board, the country director of UNFPA among other guests. The climax of the event was the launch of the youth end FGM youth group West Pokot chapter. Five artists taught and entertained using ENDFGM songs. Among them are two GMC media academy activists, Mamboleo the MC and Mtunasi the artists.

Saturday 6th February marked the D DAY of the International Zero Tolerance Day for FGM, all the groups headed to Alale in the North Pokot sub-county to commemorate the special day. The main event of the day was the landmark EndFGM declaration by the council of elders from both Kenya and Uganda. The event was attended by the chief administrative secretary for Public Service and gender and ICT and youth Hon Rachel Shebesh and Hon Mbite, The governor from West Pokot county and other county officials, anti-FGM board, Unicef, UNFPA, World Vision directors, and other dignitaries from both Uganda and Kenya. This event also was covered by most of the national media houses, local radios, and print media.

➢ The pre-activities and activities that we engaged in were very successful because they put West Pokot yet again in the limelight and uncovered deeply rooted factors that hindered the total eradication of FGM.

➢ it also led to the declaration of End FGM by the Pokot council of elders who came out clear to declare their stand on FGM being the custodians of the cultures.

➢ It resulted in the birth of the West Pokot youth EndFGM chapter which has taken the role very seriously and is psyching up for the task ahead.

➢ The activity brought together senior government officials and UN agencies whose responsibility is to protect children from harmful vices and support to support the initiatives of the grassroots groups. Hopefully, this will make funding opportunities available.

➢ The series of activities also were highlighted by various media houses and several radio stations were involved. It became the only event that has attracted all media houses with evidence of cameras everywhere.

➢ From this event, the country director promised to support research that will lead to a collection of FGM data in West Pokot county which will inform interventions going forward.

➢ The launching of the youth EndFGM network also leads to the idea and suggestion that the same be done in all other counties with a high prevalence of FGM.

➢ One of the main challenges we encountered was limited resources. The original plan we had was to carry out a mini media academy side event during or before the celebration day involving youth activists from West Pokot. This wasn’t achieved as the total budget we shared wasn’t met. We, therefore, had to bring on board 10 young people to attend the training and the events.

➢ The involvement of many partners who did not directly support the organization but still expected it to organize the event put a strain on the organization who had to organize a whole national event with almost zero budget and this made some activities not have the intended outcome.

➢ The distance where the main event was taking place was so far away into the interior from Kapenguria and in a place with almost 100% FGM and child marriages prevalence.

➢ The media campaign needed to be escalated into the remote villages. It was noted that some government officials were abetting FGM and nobody was holding them accountable because they are feared. It was suggested that there was a need of having a media surveillance team made up of youth in all the FGM hotspots areas who were well trained, equipped, and skilled to highlight the issues of FGM so the stories in the villages do not go unnoticed.

➢ If I was to do this activity once again I would train at least 15 youth who are passionate about ending FGM, who are well connected and educated to be in charge of the 15 FGM hotspots areas so that they can be responsible for highlighting issues of FGM/CM in the areas they represent. They would be trained to identify, report and make follow-ups. It is an idea am currently pursuing to have 15 youth surveillance members who will be trained on how to use media to identify, report, and provide solutions in the 15 mapped hot spot areas.

➢ Finally, I would like to sincerely thank GMC for trusting us and continue to support us to carry out media campaigns, and making sure media is never left out of any activity on FGM. It is because of their support that other big organizations are seeking our guidance to design media campaigns for them in their activities.

We will forever be grateful for any support given to us.