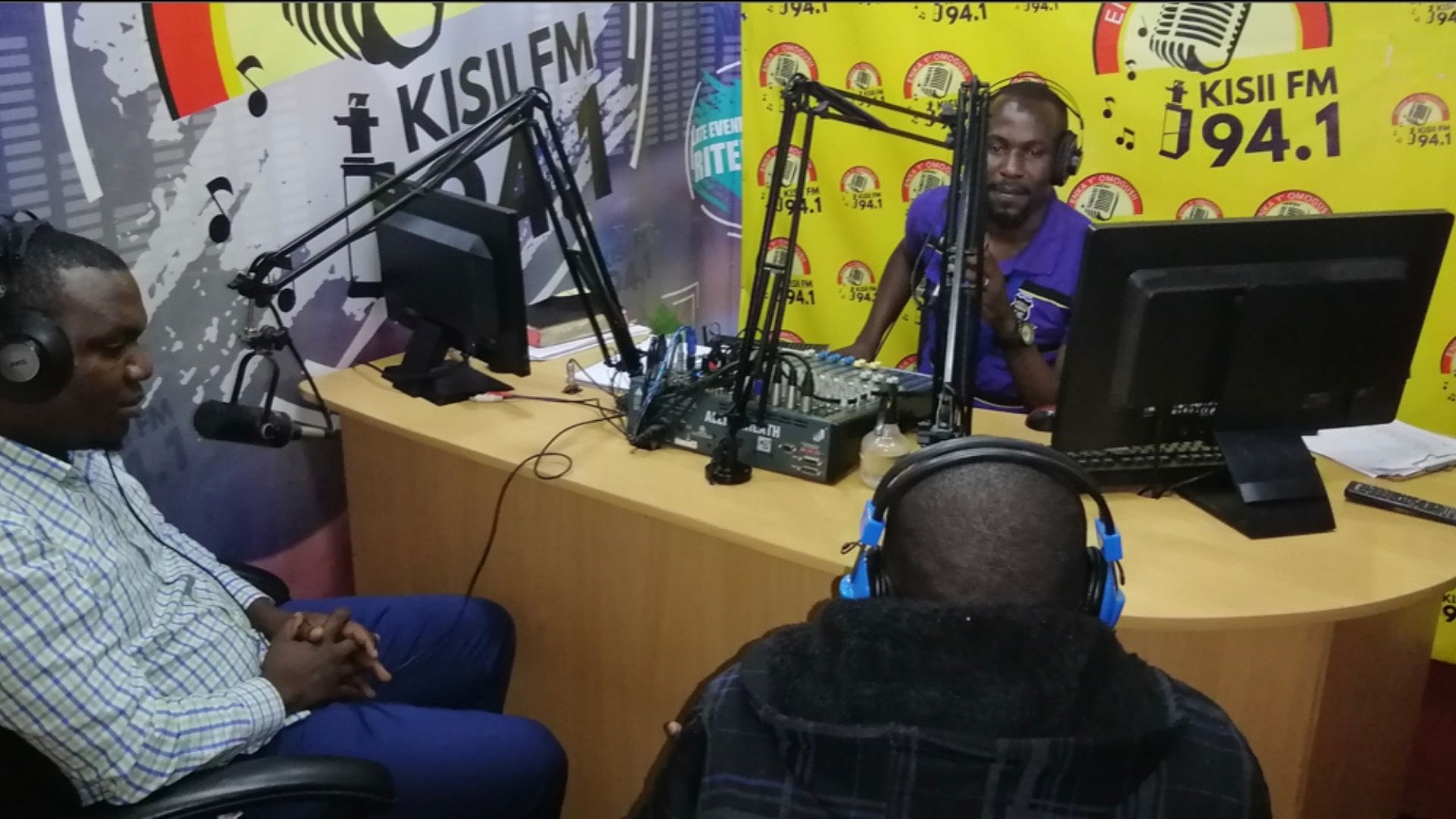 Walter Mounde is a kenyan anti-FGM activist who is raising awareness of health care professionals that are cutting girls in the Abagusii community.

The aim is to reach at least 2 million people with the FGM sensitization message on FGM medicalization. To mobilize opinion leaders and activists in the medical profession to make a rallying call for health care workers to stop perpetuating the cut. To Amplify our existing strategies to end FGM through the media.

1. Use of Campaign Posters.

Through support from GMC, our campaign was able to design and print 200 posters with the message “TOAMUE TOTIGE GOSARA ABAISEKE” which translates to “let’s decide and stop cutting our girls.” The posters were distributed to schools, homesteads, local offices including the chief’s office, health centers, and notable places in shopping centers. They were distributed in Mwabosire location in Nyamira County and Kegogi location in Kisii County.

Dr. Ombati and FGM activist Walter Mounde were on the evening of 6th Feb 2021 hosted at Kisii FM one of the leading Gusii stations with a target audience of up to 5 million in and out of Kisii and Nyamira counties.

The show that was held to mark The International Day of zero tolerance to FGM and supported by The Global Media campaign to end FGM (GMC) focused on FGM medicalization.

“FGM conducted by a healthcare worker or not is unsafe and has effects on the girl’s body. As a medic working in the maternity area, I have seen the complications this vice has brought and I beseech our people to stop it. I am further asking my colleagues to stick to the oath that binds to respect the law. Let’s not violate the law because of 1000 or 2000 shillings that you receive after performing the cut.”

Despite the multi-stakeholder approaches and intensive campaigns done by various CSOs and governments, FGM prevalence in Kisii has remained high in Kisii over the years with research from the ministry of health pointing it at 84%. This was confirmed by the callers who confessed to cut their girls and asked to learn more to know how they can bring up their children morally without the cut.

Walter has been leading campaigns through mobilizing human resources and active usage of radio to change attitudes on FGM.

The show reached approximately 890,000 people as per the station’s data and lasted one hour.

On the morning of 11th Feb 2021, FGM Activist Walter Mounde together with the Nurse Psychologist and Gender focal person kisii County Ruth Mogaka were hosted at GetembeTV a local Gusii TV station. The discussion was on FGM Medicalization.

Through experience, The Gusii community has changed tact to use of health care workers to either perform the cut at home or village-based clinics or even in public hospitals. The practice is rampant.

The discussion which was live on Facebook, YouTube, and radio reached approximately 700,000 people through all their platforms. Ruth challenged Health care workers to respect the oath that binds them to practice what is right and respect human rights.

“It’s sad that our colleagues can be blinded by one or two thousand shillings and end up violating the girl’s rights. I urge our people to report such characters for action”

The discussion invited several reactions with a section of the audience promoting the vice on the pretext of observing the Abagusii traditions while a larger part of the responders termed the practice outdated.

“The practice is outdated. I wonder why people do it. We are glad you are working hard to teach our people.” Mercy Moraa posted on the GETEMBE TV Facebook page. On the part of Walter Mounde, he urged parents to take their role seriously if at all they don’t desire their girls and boys to avoid early sex practices and Teenage pregnancy. Here is the video link to the discussion:

The Kisii county gender focal person who was hosted on Getembe TV promised to start a campaign within the health sector to sensitize health workers on the need to stop FGM.

Some callers confessed to having cut some of their girls and promised not to cut in the future.

A section of responses on Facebook live stood ground that they will continue to cut their girls as per the Abagusii traditions.