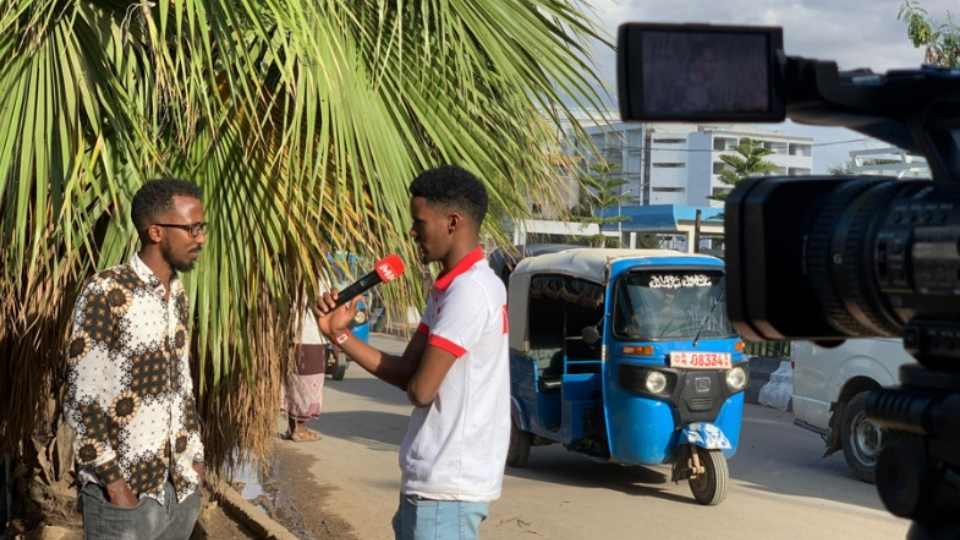 My name is Farhan Ahmed, a Somali journalist from MMTV Jigjiga Office based in Jigjiga capital city of the Somali region of Ethiopia in the last two years I have worked with some other main media houses in the region. I was one of the journalists who succeeded to carry out a media campaign program on October 11.

To mark the international day of child girl on 11 October celebration. I organized a TV program on MM Somali TV about an opinion gathering or focus pop about how the population sees the decisions of the draft Fatwa conference to end FGM that I conducted in the capital city of Jigjiga as part of international child girls’ day.

MMTV is watched by all of the East African countries especially Somali people living areas and some other abroad countries.

I have visited mothers who are businesswomen in Jigjiga Markets and other parts of the Jigjiga community. I have shared with the pleasure of marking the international child girl day and I asked about how they see the first consultive meeting for the concerned regional offices on the draft Fatwa to end FGM in the Somali region which its communiqué was telecasted horn cable TV and FM Jigjiga as well as the decisions issued by the Supreme Islamic Affairs council together with partner government offices.
As MM Somali TV it was a great pleasure for us to succeed in the program as we have already planned.

Some of the main programme participants whom we have met said as follows:

"Nowadays, I watched on TV the consultation meeting of the region concerned offices that they issued a resolution to finalize the fatwa. I would like to say you are right and move forward with the implementation of that law." Somali TV… Click To Tweet

“October 11 as international young child Girls’ Day, is a very special day and it is important to commemorate to highlight the difficulties that children face during their development while their problems are innumerable here, both physical and mental, If we take the physical one it includes female genital mutilation, rape and the like.

Among them are those who are mentally discriminated against boys. So, I am telling the community including religious scholars, traditional elders, mothers and fathers, and all concerned groups to unite and address the plights of women.

I am very much welcome the Media Campaign for the Elimination of Female Genital Mutilation and it is the only way to raise awareness.”