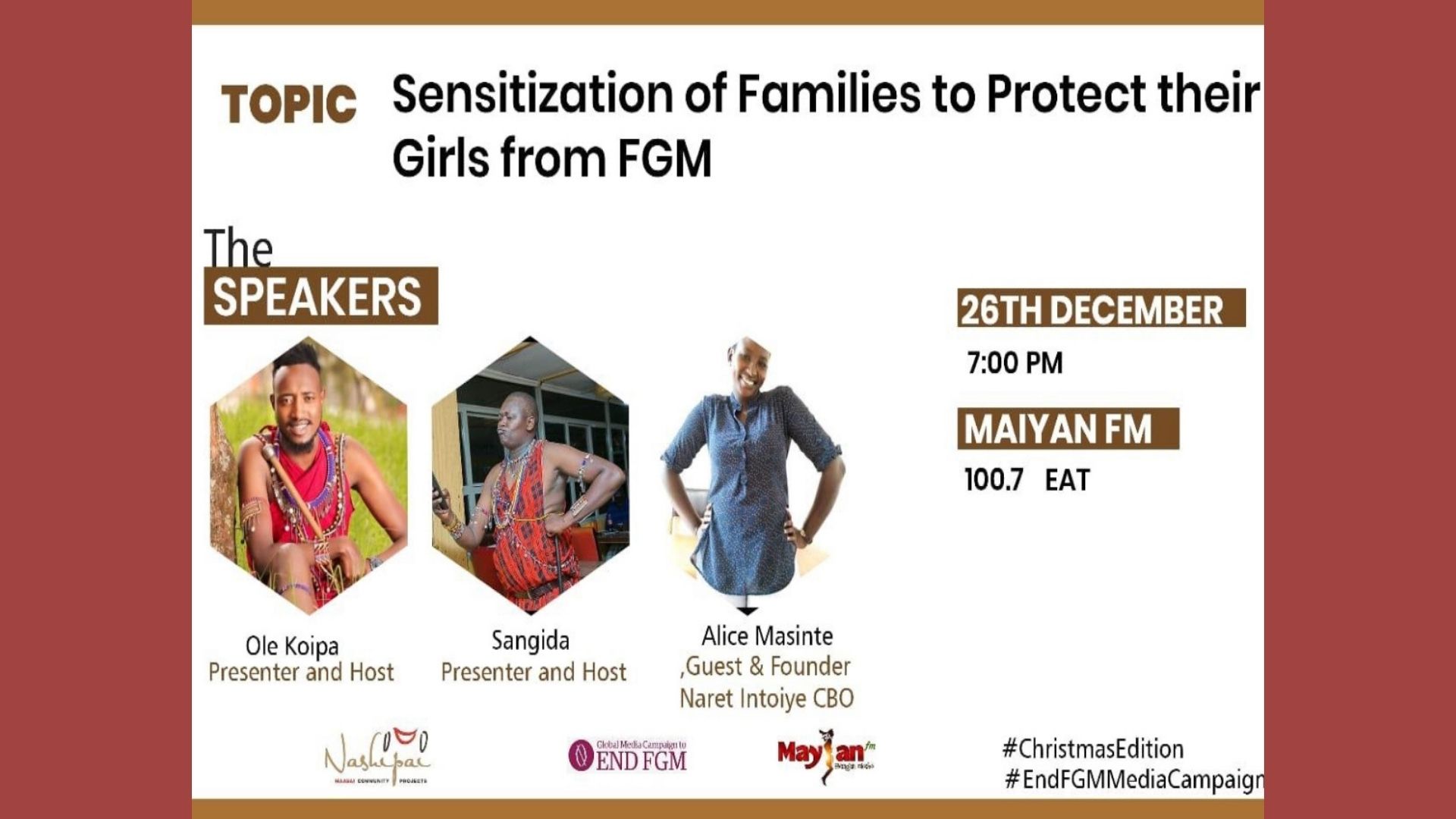 There were 3 participants; 2 Youth FGM Survivors /Activists and 1 Educator/ End FGM campaigner. The participants were selected from the sub-counties with the highest FGM prevalence and as well as those that speak fluent Maasai. Their home localities have recorded high HIV prevalence due to harmful cultural practices i.e. Rombo Ward.

Bringing forth a campaigner from Mosiro Ward was necessary because the area has low school enrollment of girls as a result of child marriage and gender inequality. Engaging a campaigner who is also an educator was crucial in urging families to take their girls back to school this year, as well as sharing best practices drawn from her experience as a teacher.

Audiences were saying that following our media sensitization they are now convinced to stop FGM, an example was a young man from Loita, Narok who pointed out the implications of Covid 19 on girls’ education.

Naserian being a teacher and a campaigner used her power to explain how FGM affects girl’s education, whereby some schools record near-zero girls’ transition. She urged families to show parental responsibility by providing essential items to ensure the welfare of girls is well cared for.

The show at Nosim FM was Live on Facebook with 500 views moreover, we recorded short clips for the Mayian FM show and tweeted using @nashipaimaasai & @intoiye Twitter accounts getting at most 455 impressions.

Sidai FM was also very interactive, and as much as FGM is sometimes is perceived as a women-only issue, men have now joined the conversation. More than four men called into the studio either expressing their support to protect girls or finding out how they can be of help in ending cultural practices that rob girls of their rights and dignity.

An example is a young man from Transmara, who was curious to 1) find out how to report an FGM case and 2) if there are specific people who go around to monitor if FGM is being conducted.

After an hour-long engagement both on-air and on social media, it came out clearly that it is a collective role of everyone to be vigilant and protect girls from FGM.

Our media campaigns were all a success apart from Nosim FM that showed uncertainty in hosting us, leading to Selina traveling to Nairobi to have a negotiation with them to maximize their huge audience during our back-to-school end FGM campaign.

At Sidai FM, young men were calling in to express their interests in becoming he for she champions, some went ahead to acknowledge that it’s their role to safeguard women from all forms of GBV. These messages strengthened our advocacy where now we shall leverage on engaging young men in Anti-FGM campaigns.

After the show at Sidai FM, the Human Resource Manager invited Selina to his office to express gratitude and even proposed more media engagements, they are willing to give us a weekly program to discuss matters end FGM with free airtime, an opportunity which we will leverage on.

We encouraged the media houses to have a content focus shift to use their platforms in condoning harmful cultural practices, something that Mayian FM and Sidai FM agreed to take upon.

At Nosim FM, the host was pleased by Naserian’s initiative, that he offered to become the Master of Ceremony in her upcoming regional event on eradicating TB, addressing SRH, and integrating wellness in community health services.

In our next media campaigns, we will tag along experts in the legal industry and health practitioners to give expert information on the health effects of FGM and explain that the law is there to protect our community not to harm them.