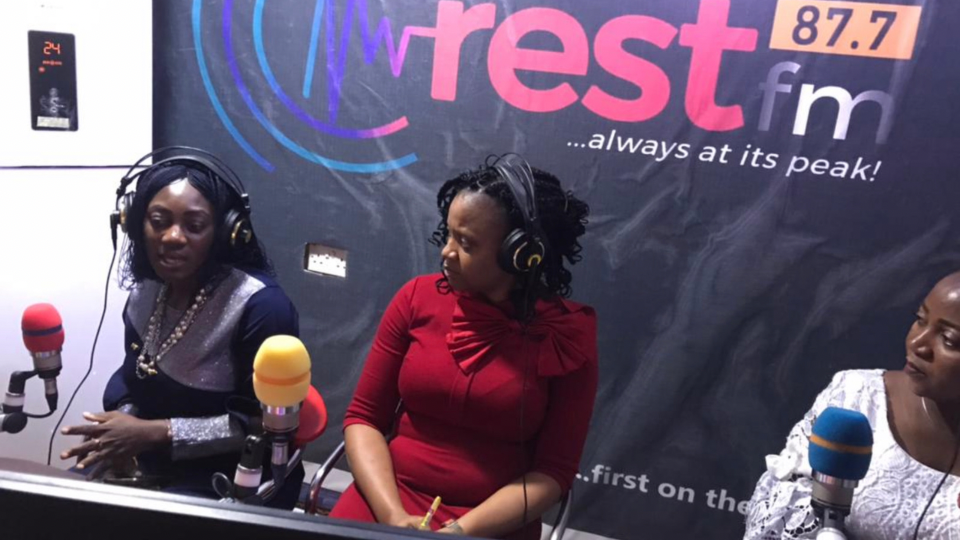 The project was a radio program aired live at two radio stations in Akure, Ondo State to amplify our voices against FGM. The Radio Programme took place at CREST FM 87.7 and FUTA Radio 93.1FM where the English and Yoruba Versions were aired LIVE respectively.

It was organized for the people of Ondo State and the environs to create awareness about FGM, the dangers that are involved, and what the recently signed VAPP Law in Ondo State says about victims, offenders, and accomplices of the crime. The project was executed in September because of the holiday season in view. It has been discovered that girls that go through FGM at this time are usually on the increase because most of them usually travel for the holidays.

There was a maternity center outreach that took place at a maternity center in Akure, Ondo State before the radio programs were embarked upon by selected members of the Rhealyz Africa Team and also a fellow GMC Advocate, Moninkanla Ogidan to engage the women at the center to sensitize them about FGM and the reasons why they should never cut their girls. We were also able to share with them what the VAPP Law says about FGM. They were given the toll-free line in Ondo State in case they have any incidence they would like to report. The women were also given the opportunity via a vox-pop to plead with the men to support the fight to End FGM.

The legal practitioner that was supposed to be aired initially was Bar. Toba Olaifa but because she could not make it, she sent in Bar Dotun Adegoroye who duly represented her.

The media project was successful because we were able to receive many calls before and after the show who commended us about the radio program. They emphasized that they enjoyed it and would most importantly take necessary action.

• During the maternity outreach, we were able to educate and sensitize the women about FGM and its dangers to girls and women. We were also able to give out the toll-free lines in Ondo State.
• Our guests were able to educate people on how FGM negatively affects girls and women whether immediately or in the future.
• It was also note wrote worthy as some of our audience were already enlightened about FGM.
• The legal practitioners were able to emphasize what the VAPP law says about FGM and its perpetrators. There was an emphasis on the number of years perpetrators will have/ the amount of fine they will pay if they are found guilty.

There were no difficulties encountered as all the parties involved cooperated with us through the whole process.
However, during the radio program, there was a caller who specified that in Igbekebo, a town in Ondo State, there is still a prevalence of the act among their citizens. Also, another caller said that FGM is an ancient cultural practice and that it sounded strange for the government to include penalties for an act like that.

According to him, the act was performed on almost every girl woman back then and it should not be a big deal now. He also said that even the bible supports the act. Our guest speakers were however able to answer by informing him that the fact that an act has been committed in the past and some got away with it does not justify the fact that it should continue to be done. They iterated the negative effects it has on girls and women and also said that the bible never said girls should be cut, only boys should be circumcised and that is because if they are not, they will be susceptible to infections.

This is an indication that we are not yet there and that we should continue to raise our voices and sensitize the people about FGM. In subsequent events, there will be a need to visit religious centers to sensitize them about what the bible says about it. There will be a need for rural communities’ awareness and sensitization especially in areas where the message of FGM has not gotten to.