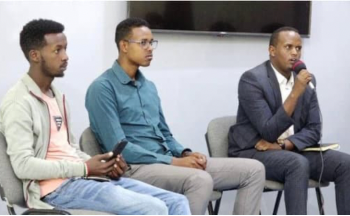 My name is Hanan Farah, Somali Women Journalist, from SRTV. For the day of African child which is marked on 16 June, I organised a panel discussion about the problems of African children.

Members of the youth federation were invited to join our discussion which focused on the problems of African children.
I believe that Civil societies and youth federations can play a great role in ending FGM and enacting measures to tackle challenges faced by children.

Khalid Mohamed Zubair- the Chairman of MAANSHIIL Organization and deputy chairman of youth federation of Somali region. Speaking on this occasion Khalid says 16 June is a great day for all African children and particularly Somali children. The importance of this day is highlighting the rights of children and to unmask or perform the problems of African children and propose suggestions to end violence against children and women.

The main problem of African children is violence made or committed by parents like the traditional harmful effects of FGM.

Salad Is a chairman of Somali Social Workers (SSW) were among the participants.
Somali children always encounter harmful problems. I am the staff of the women and youth affairs bureau of the Somali region. On January one a seven-year-old girl was found dead, it was reported that the cause of death was suicide. The case of that girl was ignored.

This day of 16 June is for that girl. A day to fight for rights so this doesn’t happen again.

Abdihakim Samaddoon is another participant from civil societies and the current chairman of SYMOO organization.

“This day of African child which marked on 16 June has a significant impact on children. It is the only day we remember and send messages about the rights of our children and to resolve the problems of African children.”

“Somali women always confront harmful problems including but not limited to rape, killing, and torture. The only way that we can end the harmful violence against children and women is to unite our efforts and stand together.”

Hussein- Department head of protection and child care at OWDA. The commemoration of African child day which is marked on 16 June is a great opportunity for African children. The message we send on this day is how African children could access education, entertainment, and psychologically heal.

Children are forced into recruitment, they do not get child care, and psychologically they are violated.

Article 36 of the Ethiopian constitution stated. Not to be subject to exploitive practices, neither to be required nor permitted to perform work which may be hazardous or harmful to his/her well-being.

1. Divorce of their parents

“It is our responsibility to protect the rights of children and to work together with those organizations that engaged in that project.”

Finally, all participants demonstrate it is a commitment to eradicate and end FGM. The day for the African child is an opportunity to raise awareness on the national and international concerted efforts to create a better and bright future for African children and to secure all human basic rights of children.

In addition to that female genital mutilation is a worldwide problem. FGM is a harmful traditional practice that threatens women’s health and violates women’s rights.