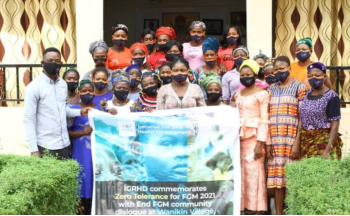 This first support from Wallace Global Fund has driven us at Initiative For Girls’ Rights and Health Development-IGRHD to acquire more positive results in our commitments to weaken harmful social and cultural practices affecting girls and women such as Female Genital Mutilation. Lots of internal restructuring and adjustments within the organization have been done asides from the numerous anti-FGM projects that were carried out.

Below is the breakdown of events month by month:

To commemorate Zero Tolerance Day for Female Genital Mutilation, My team and I visited the most remote village in Osun state Nigeria, Waninkin-ife village. We engaged in community dialogues with the Traditional ruler, Women leaders, and market women and trained them on the implications of FGM. We made a documentary to that effect even. We also spoke about COVID-19 and how it has increased the prevalence of Sexual and Gender-based Violence. We distributed nose masks, publicity materials, IEC materials, and stipends to that effect. The village has recorded a high prevalence of FGM but through our interventions, the stakeholders have vowed to join our campaign. We will be inaugurating END FGM Champions in the community by September to serve as watchdogs against the practice of FGM in the community.

To commemorate International Women’s Day, we engaged in different media activities to sensitize the public against FGM. we spoke about the implications, myths, and reasons for FGM and why it should be stopped and tackling the ineffectiveness of anti-FGM laws in Nigeria. Television continental- TVC has an estimated reach of 150,000,000+ viewers. I also spoke about the implications, Causes, and myths surrounding FGM on 5 different webinars. We also began our radio programs and produced the jingles in English and Yoruba. The school sensitization project also kicked off, we engaged more than 200 young girls of Oduduwa College with our just launched #EducateDontMutilate curriculum. We taught them basic knowledge of Human, Women’s, and Child’s right, myths & implications of FGM.

Festive seasons are times FGM is mostly perpetrated, during the Easter season we aired jingles in English and local languages to further spread the end FGM message. We also had a 1-hour live phone-in program on different days. We received lots of backlash and positive feedbacks also. We went live on Oodua FM reaching estimated listeners of 6,000,000. We spent the month doing media campaigns.

While continuing with our media campaigns, It was our 6th anniversary at Initiative For Girls’ Rights and Health Development-IGRHD and we hosted a webinar with stakeholders on the importance of Grassroot Advocacy. Maggie O’ Kane, Ms Ayushi of Soroptimist International, and Her Imperial Majesty, Queen Naomi Ogunwusi, The number one queen of the Yoruba race, Nigeria were in attendance and pledged continuous support to our campaign against FGM.

The media has been our major platform for Anti- FGM activities, asides from webinars, radio, and tv programs, we also engage people on WhatsApp. Our last anti-FGM teaching had 124 young persons in the group. We launched the #EducateDontMutilate project curriculum which serves as a guide to all facilitators of our school sensitization projects.

The next phases will be spent on the following: