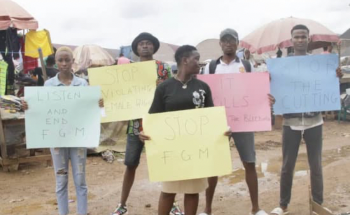 The media and Community activities to ending FGM/C started with a stronger spirit taking into consideration the effects of the covid-19 pandemic which creates room for some persons to hide under the pandemic to practice FGM/C.

The campaigns started with:

16 radio interviews/Drama the main focus was creating more awareness using the radio which is the commonest means of reaching out to many audiences in the local communities and critical stakeholders to dialogue and it was a live phone-in programmes.
The panel was made up of those from the medical, legal, human rights, traditional leaders, religious leaders, students, youths, and survivors.

Issues on the table were the role of men in ending FGM/C, How FGM/C social norm should be declared as a forbidden traditional norm that should be punishable by the traditional custodian on anyone that cut any girl or woman which will include anyone with such knowledge but refused to inform the government or the community.

The callers called in to stress that the laws and punishment can only be effective when the government allowed and empower the traditional leaders to do that.
Other callers were of the views that the TBA’S, Health works, Churches, Traditional leaders should jointly come together to form a common monitoring and reporting network were from the point of birth to child naming ceremony and traditional blessing or giving indigenous registration documentation/certification. This process will help to check and put an end to FGM/C.

The program was carried out in local languages, pigin English.
The focus was on the right of the girls and women, monitoring FGM, medical implications, When to speak out, Whom and how to report FGM cases. The program also involved getting non fgm/c media persons/ presenters involved in anchoring the program which helps to encourage most of them to go for research to know more about fgm/c with the good news of having 7 non fgm/c presents picking the challenge to talk on fgm/c on their programs.

The younger groups were so supportive of the campaigns.
The local languages of the people were used and critical stakeholders were also reached with over a million people.

What we would do differently:

The project could introduce comedy having listened from those using smartphones and the younger generation.
The comedy video and audio attract thousands of both young and old sharing the message.