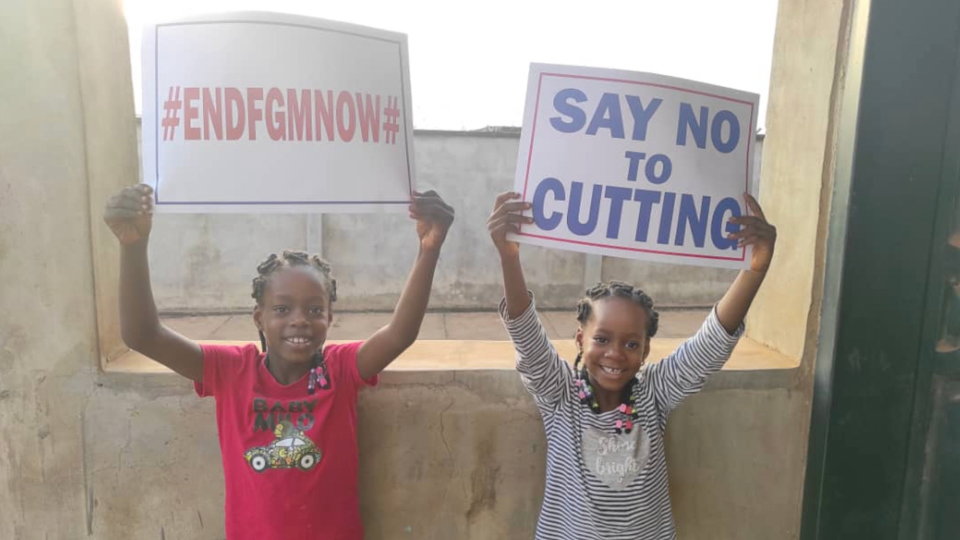 Writtern by friends and colleagues in memory of Olubunmi Afuye, his two girls photographed above, our thoughts are with you and your family.

In memory of Olubunmi Afuye, an inspirational campaigner, father and friend who was very sadly in the wrong place at the wrong time, caught between a bank and, a gunman, Olubunmi tragically lost his life instantly. Rest in peace Olubunmi Afuye.

Ecclesiastics 3;2 in the Holy Bible enunciates God’s seasonal plans for man; when to be born and when to die.
For the late Olubunmi Afuye, his sojourn to the earth was a divine arrangement that materialized on the 30th March 1978 in the family of Late Chief David Olorunfemi Afuye, a school teacher who later became the Alatunse of Emmanuel Anglican Church, Agbado Ekiti, and Mrs. Olutayo Afuye of Osi Ekiti as the 4th born in the family of 5.

Born into a family that cherished education, the young Olubunmi was enrolled in Fanibi Community Primary School, Akure, Ondo state to begin his educational pursuit which spanned between 1983 and 1989. His secondary education took him to Oyemekun Grammar School, Akure between 1990 and 1996 where he not only displayed his academic prowess but also leadership skills outside the walls of the classroom, including being a staunch member of the Christian fellowship.

For his tertiary education, Olubunmi spent some years at the Federal University of Technology, Minna, Niger state before returning to Ondo state to attend the Federal University of Technology, Akure, FUTA where he bagged a degree in Civil Engineering in 2007. However, he knew that engineering was not his calling but journalism and wasted no time in acquiring the requisite education to match the God-given skills that had made him shine brilliantly among the galaxy of stars in the profession.

This quest for knowledge took him to the International Institute of Journalism, IIJ where he bagged a postgraduate diploma (PGD) in Public Relations and Advertising and later the Advertising Practitioners Council of Nigeria, APCON for another professional diploma in Advertising which made him an Associate member of the apex body for advertising practitioners in the country. He was also at the Joseph Ayo Babalola University, (JABU) Ikeji Arakeji for a degree conversion programme to Mass Communication and was already in his final year.

To all who came in contact with Olubunmi, a very noticeable quality was his ability to fluently marshal his points, teach effortlessly and painstakingly in a way that comprehension would not be difficult for his audience or beneficiaries of the knowledge impartation.

Little wonder he started his career as a teacher at Winners International College Akure, while he was awaiting admission into the university in 1997 and the short time he spent there was devoted to shaping the young minds to become responsible citizens beyond their academic quest.

In 2003, he had a stint at the Federal Radio Corporation of Nigeria, FRCN as a freelance presenter. However, he cut his journalism teeth in 2008 when he joined Adaba 88.9fm Ilara Mokin in Ondo State.
Olubunmi would later tell about a hundred students at the mentorship forum that God led him to Adaba FM to begin the career he was destined for after months of depression and frustration for graduating with a poor result in the course he had read in the university.

In addition to his numerous on-air chores, he was appointed the Public Relations Officer of the station in 2016 till 2018 when he was seconded to the Ondo State Radiovision Corporation, OSRC TV in 2018 as Anchor and Newscaster. After some time, he was redeployed to Orange 94.5 FM as Senior Producer but majorly operated in the Marketing Department till May 2021 when he again voluntarily left the services of the state government after about nine years of meritorious service of being one of the most cherished voices on air in the state and beyond.

His break from the core journalism profession was to enable him to explore corporate communications while also continuing with his educational pursuit with a Ph.D. target as he would often tell his close friends and colleagues.

Olubunmi’s new trajectory in corporate communications began at the Elizade University Ilara Mokin Ondo state where he was employed as Senior Public Relations Officer in May 2021. With a penchant for excellence, Olubunmi wasted no time in outlining his vision for the university to ensure that it surpasses all extant achievements and records in no distant time.

Time to work in Gods Vineyard:

Like he knew he had a short time to do so many things, Olubunmi gave his life to Jesus Christ at a young age with his first Christian experience at the Deeper Christian Life Ministry where he led many young peers to Christ. He later joined his parents at the Anglican church. He was a devoted and dedicated youth at St. Andrews Anglican church, Oyemekun, Akure where his tenacity, love for Christ, and selfless services led to his appointment as Youth Forum President between 2011 and 2013.

Like a tree planted by the riverside which yields its fruits in season and whose leaves do not wither, his services in his parish got the attention of the diocesan leadership who was convinced he needed to be rewarded with higher responsibilities. This was why he later held sway as Youth President, Anglican Youth Fellowship, Akure Diocese between 2012 and 2018.

This period remains a watershed in the annals of the youth movement in the diocese as a result of the rejuvenation of spirit, soul, and body for thousands of young people. Even after his years of stewardship, he remained a mentor to hundreds of youths within and outside the diocese.

Time for service to society:

In all offices that he worked, his human management acumen always came to play. At TELNET International, his children’s school, he served as the Public Relations Officer of the Parents Teachers Association, PTA, just as he was also a sought-after compere at major government and private events around the country where he dazzled his audience with impeccable grammar, profound oratory prowess, and event coordination skills.
Popularly known as BUMBAM, Olubunmi was one of the finest sportscasters in his generation and the incumbent Financial Secretary of Sports Writer Association of Nigeria, SWAN, Ondo state chapter.

Time to tie the nuptials:

Despite his many God-given talents and skills as well as aural of excellence, good looks, and dress sense, Olubunmi was a disciplined young man which helped him to keep focus while working with his fellow youths. He got married to the love of his life, Oluwakemi, nee Pele on September 10, 2011, and the marriage is blessed with two wonderful daughters, Korede and Ire. His commitment to his marriage vows is a reference point for many married youths within and outside the church.

Olubunmi had great dreams. He had lofty ideas about how to make his society a better place. He had not just hoped about the future of the country, but also hoped that he would be part of the redemption, a passion that was never hidden in his regular interfaces and conversations behind and off the microphone. He had looked forward to when he would say goodbye surrounded by his children, grandchildren, and great-grand-children, however, the goodbye came earlier than anticipated after the unfortunate incident of July 15th. Despite the pains of his shocking exit, his legacies will remain indelible as evident in the plethora of condolence messages including that of the Governor of Ondo State, Arakunrin Oluwarotimi Akeredolu who ‘admired his candor and carriage, especially his brilliant delivery at functions he compered’. Olubunmi is missed by his loving wife, Kemi, two beautiful daughters oluwakorede and ireoluwa, an aged mother, siblings, and in-laws.

GOODBYE OLUBUNMI AFUYE, popularly known as BUMBAM till we meet at Jesus’ feet