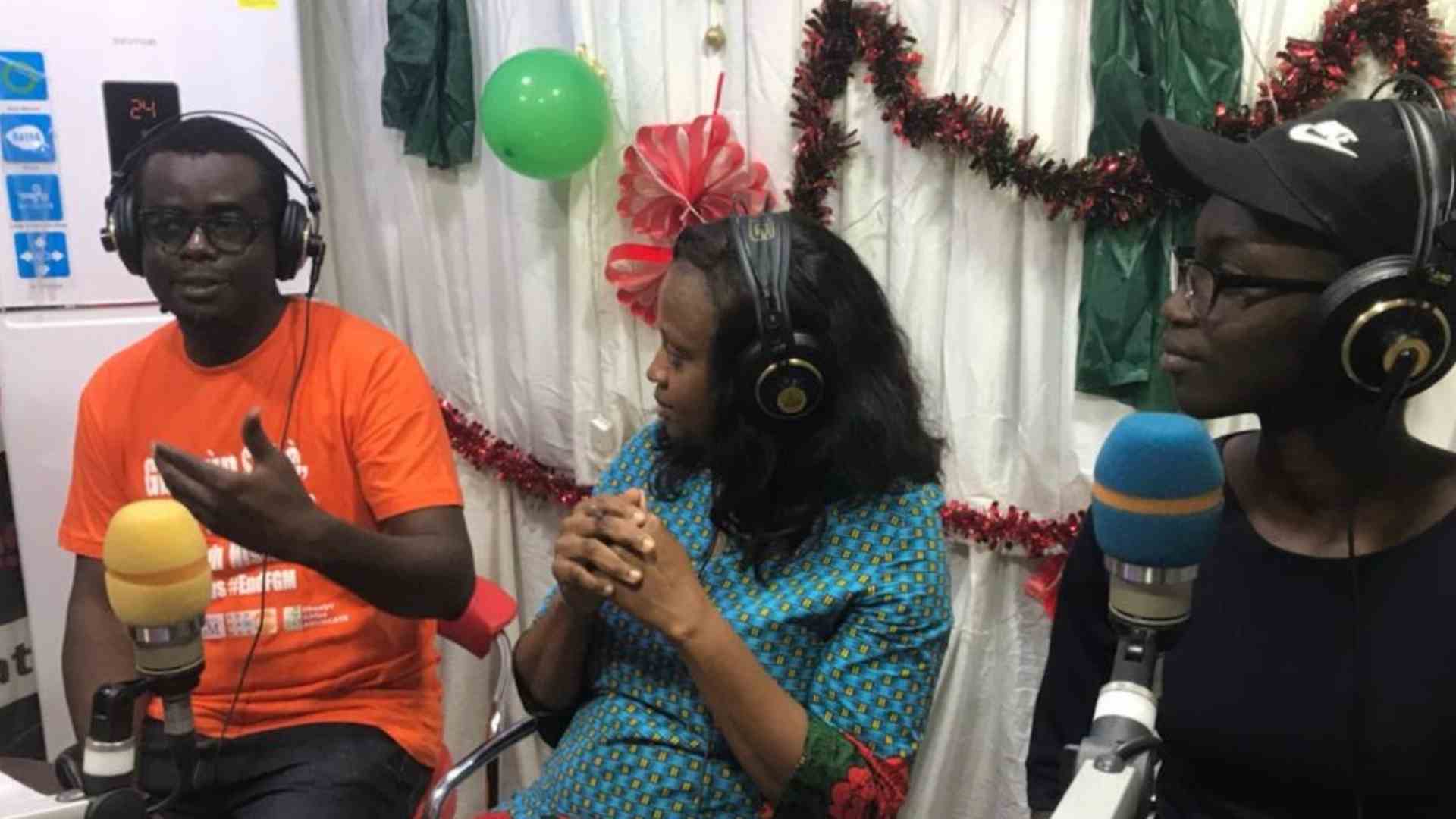 The media campaign was a radio program aired live at two radio stations in Akure, Ondo State, to amplify our voices against FGM.

The radio programme took place on Monday, December 6th and Thursday, December 9th, 2021 on CREST FM 87.7 and FUTA Radio 93.1FM, where the English and Yoruba Versions were aired. The Radio Program was tagged “Raise your Voice against Female Genital Mutilation Now!”

It was organised for the people of Ondo State and its environs to create awareness about FGM, the dangers that are involved, and the role of men and political office holders in using their influence, story, and experience in putting an end to FGM.

We also spoke about the recently signed VAPP Law in Ondo State, and what it says about victims, offenders, and accomplices of the crime, steps to finding help, and who to reach out to for help.

A street impact engagement took place at Arigidi and Agbaluku in Akoko, Ondo State, before the radio programs. This was embarked upon by passionate End FGM advocates of Rhealyz Africa- Oluwatosin Oyakhire, Ifeoluwa Kayode, and Blessing Imoru. During their engagement, a larger part of their audience believed that FGM still has to continue due to some myths that have been held firmly by certain climes.

The advocates were able to sensitize and educate them about what FGM truly is and the negative effect it has on women and girls. It was worthy of note that most of them later agreed and promised to do the needful by educating others around them.

The guests were able to educate the public about FGM, myths about FGM, dangers surrounding FGM, the roles of political office holders in ending FGM, the steps that victims can take in accessing help, and who to reach out to for help.

Honorable Tomide also used the opportunity to admonish men to step up and join the fight against FGM in society. He also gave the assurance of how victims can be protected from harm and access justice through the various political/legislative structures available. The session at CREST 87.7FM also featured an FGM survivor who shared her experience and the negative effect FGM has on her now. Due to the fact that she was cut, she said she has no sexual drive or desire. According to her, it even became worse when she gave birth to her children. She then pleaded with mothers to ensure that their girls do not go through what she has gone through and is still going through.

During the Yoruba session, one of the callers said it is because those who engage in the cutting and mutilation of girls now are not experts compared to those who used to do it years before. Thankfully, our guests were able to change that mindset and correct him that FGM does not have to do with whether you are an expert or not, it has a lasting negative effect on girls and women.

Our jingle format was an opportunity for top politicians in the state to speak against all forms of FGM practices. Also, radio jingles in Ilaje dialect were played at intervals on Ejule-Nen Radio, 93.7FM, Okitipupa.

The media project was successful because we received several calls/engagements during and after the show and commended the radio program. They emphasized that they enjoyed it and would most importantly take necessary action.

We also had an engagement with some corp members within the state on the need to become advocates and champions against GBV and especially FGM.

The last day of the 16 days of activism took us to St Louis Grammar School Akure for a hand paint splash- an event that was used to sensitize girls on FGM and the need to raise their voices and join the fight against FGM in society.

The street impact was supposed to be carried out initially by our Advocates who are students of the Adekunle Ajasin University, Akungba, Akoko but that had to change because the school suddenly went on strike and we had to engage other advocates who are within the Akoko region. Also, it was difficult to get a survivor to feature on the show because most of them do not have the courage to open up to the public yet.

Thanks to the Global Media Campaign to End FGM and UNFPA for their partnership and support.