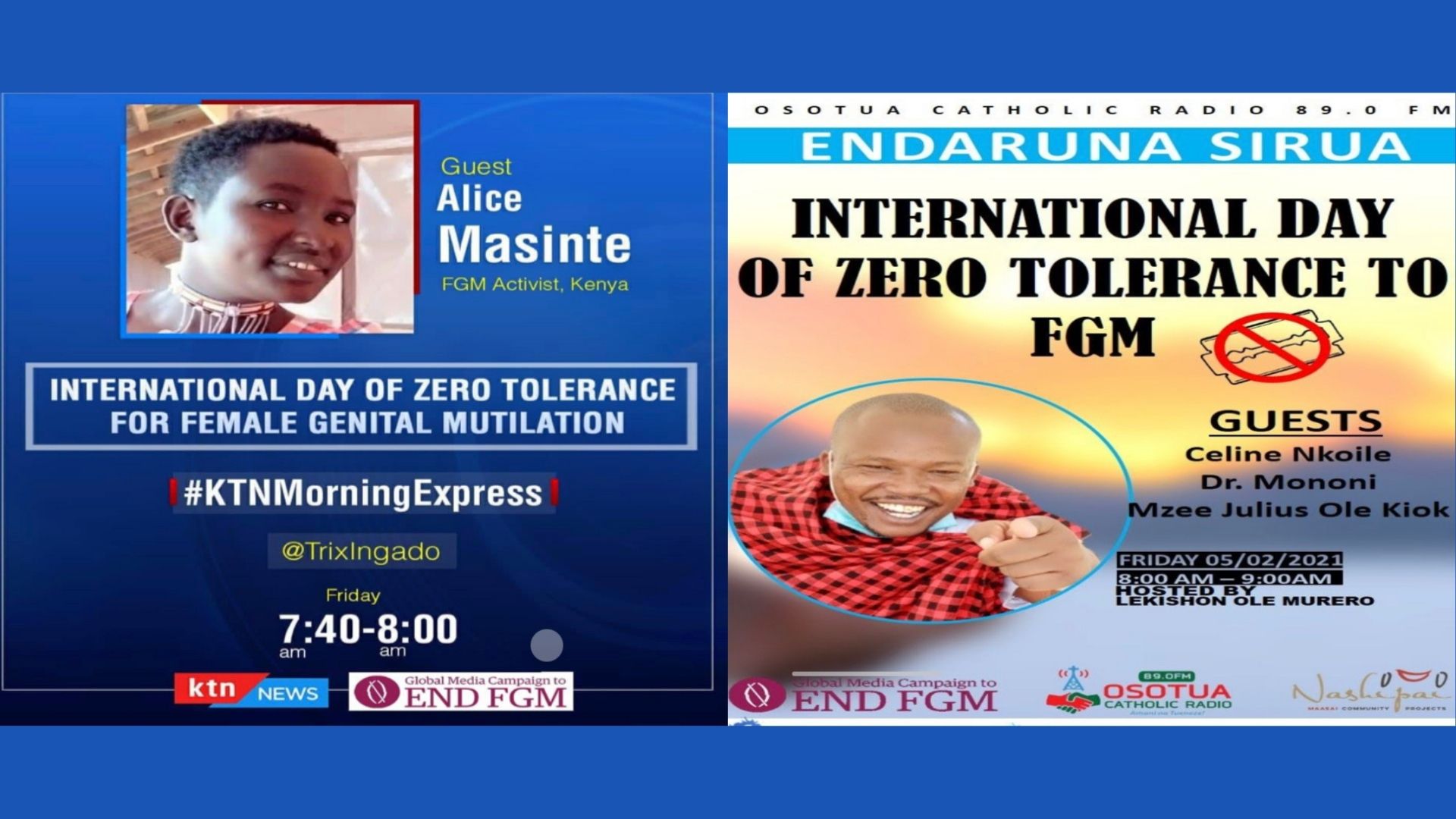 There were 3 participants; A health practitioner, a legal expert, and an Anti-FGM campaigner. Participants were selected depending on what expertise they would bring on board. There was an urgent need to involve a doctor especially with the emerging trends on Medicalization of FGM, for him to explore the irrelevance of this practice from a health perspective. Engaging a lawyer was equally important for him to educate the community that the law is there to protect them not to harm anyone. To also ensure an in-depth understanding of the FGM Act concerning what the community assumes as right. An Anti-FGM campaigner had a role to highlight the progress made in ending FGM; how the Covid19 pandemic has affected grassroots campaigns and what solutions have they come up with to counteract these challenges.

At Osotua Catholic Radio where Dr. Mononi of Transmara West Sub-County Hospital was hosted to talk about the implications of FGM to women’s health. He medically examined how FGM is practiced in an uncouth environment posing greater health risks; he points out that there is no way FGM will make anyone clean as the community propagates. Many parents collaborate with some health practitioners to cut their daughters in hospitals, something that the law forbids and is subject to revocation of one’s qualifications if any medical student or doctor practices FGM as a medical procedure.

This talk show had over 34,557 listeners tuned in.

At KTN News, Alice Masinte (an Anti-FGM campaigner) spoke about the status of girls’ education, and the impact of Covid-19 on end FGM campaigns ahead of zero tolerance day. She highlighted how the first wave of Covid-19 in Kenya affected anti-FGM campaigns, whereby lockdown and curfew measures, meant no public gathering thus no awareness creation. This made it very hard to rescue minors at risk of FGM, and with the closure of schools, children were at a higher risk of SGBV.

Alice is an activist coming from a pastoral community where there is an over-reliance on livestock production, Alice mentioned how climate change has rendered families poor and hungry, something that pushes them into marrying off their daughters. She shared how food distribution and issuing the girls’ dignity kits, has come in handy when counteracting these challenges. The media interview had at least 101,000 viewers.

At Sidai FM, Lawyer & Advocate Benedict Ole Kenka discussed in-depth, laws around FGM/C, and all the penalties one faces either by performing FGM, letting their premises be used in purposes of doing FGM, parents who let their children undergo FGM, or people who witness or are aware that the practice is happening and do not report to authorities. He explained the consequences for each of these offenses.

He urged the listeners that no one should go through any form of violence that harms their bodies and well-being. He adds that any law of the culture is accepted by the constitution unless that tradition goes against the constitution. He explains the penalties stipulated in the Anti-FGM Act where cutters face imprisonment of not less than 3 years and a bail bond of 200,000 KES. He explains that ignorance of the law is no defense, a case study of a 77-year-old woman who got arrested for cutting girls but defended herself saying she didn’t know it’s illegal.

People called into the radio asking what happens to women who want to get cut after marriage? What about the children who insist on going through the cut due to peer pressure?

The lawyer emphasized that it is still a criminal offense to go through the cut voluntarily. The law does not favor anyone regardless of age. He emphasized that ignorance of the law cannot be used as a defense. The radio show had 78,931 listeners tuned in.

There was a challenge in getting a slot at KTN on time especially because the media house was airing Moi’s death anniversary.

The host at Osotua Fm was asking Dr. Mononi questions outside health i.e. questions that could be directed to activists, making him strain to give appropriate responses. The studio at KTN had audio issues, something that confused Alice making it difficult for articulation, hence why they gave her a second chance to redo the interview.

KTN News invited Alice for a second time to participate in the Bottom-line Africa show to air the work done in commemorating Zero Tolerance Day. She highlighted that Nashipai together with Naret intoiye had organized & did an open advocacy forum on ending FGM, with concurrent side events for key duty bearers & distribution of girls’ dignity kits and food relief to the girls boarding/rescue centre.

Another win included when women at Sidai FM called to say they used to feel like campaigners were threatening them with the law, thus why they didn’t take it seriously. Now they have heard it from a lawyer, thus will protect their girls. The show at Sidai FM also brought an idea that next time, lawyer Kenka will be accompanied by a medical doctor, so that they can explore this topic of FGM more, for continued awareness creation in our Maasai community.

In our next media campaigns, we will bring along experts from the Maasai Council of Elders at the forefront advocating for a community declaration to End FGM.

We shall use media advocacy to amplify the progress made by local administrators as a way to attract more chiefs to protect girls from harmful cultural practices other than them being perpetrators of violence.

We shall also call upon a lawyer & gender advocate (Felister) who is working on developing a penal code that gives equal responsibility to teen parents whereby the boy’s family, will also equally contribute to the born child’s welfare. It will serve as a perfect platform for her to get stakeholder’s support in protecting children under the care of need while at the same time warning families who cut their daughters.