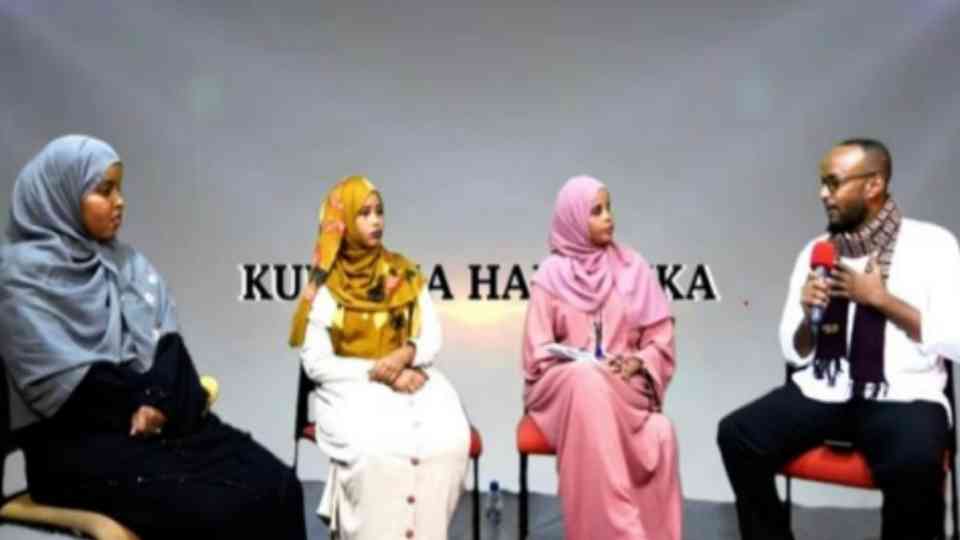 In this day and age of the 21st century, it is recognized that to have a voice is empowerment. Women and girls either shy away or lack the platform to present their grievances directly to decision-makers, the proposed media campaign programme will publicize girls’ voices and rights in a culturally appropriate manner to provoke discourses on inclusive policy reform and equitable treatment. The opportunity to raise awareness is an imposing experience of self-worth which this campaign anticipates realising.

Through video programmes, the public can get to be sensitized to issues deeply affecting them. Producing video programmes aired on Television stations will reach a wider audience who haven’t been reached through other media. The selected video message initiates a conversation on Female Genital Multination/FGM issues that otherwise may be considered marginal or sensitive but of great importance to state interest. These are often the very issues that impede community advancement.

In pursuit to raising the level of awareness of the community, critical issues such as namely: Female Genital Multination (FGM), rights of women, gender-based violence, harmful traditional practices, humanitarian protection, and public health, as a media activist collaborating Media Campaign to End FGM (GMC)
Puntland state/Somalia has conducted this activity of producing one video message to deal with specific issues on the promotion of African girl child rights especially young Somali girls in Puntland state Somalia.

The activist’s Overall objective is to strengthen Puntland community awareness and enhancing girl’s rights that contribute to realising zero tolerance of any kind of FGM, resilient and accountable community in Puntland. The Specific objective is to discuss how the journalists, activists, and religious leaders collaborate to eradicate FGM in Puntland state Somalia.

Objectives of the video program:

The main objective of this campaign was to design and produce a video programme show to deal with specific issues on the promotion of girl’s rights and to end FGM practice.

The video program communicated long with powerful programme on a wide range of ideas. However, the specific tasks of this activity were to: –

Who engaged with my show program and why?

First and foremost it is extremely important to engage with the media to support ending FGM. There is an urgent need to reframe FGM in the media to highlight and share stories of communities ending FGM, and sharing new solutions. Engaging with the media enables you to inform them use them and persuade them.
With this programme I engaged individuals with different backgrounds: religious background, a journalism background, and activism background that can acting great collaborating power against FGM practice through Puntland state community awareness.

Since the timeframe of the program was designed to be 60 minutes long, we have strived to utilize this shorter period for strong, impactful ideas and answers backed by capturing and based on research. I have employed proven methods in psychology and communication strategies which we are confident will make the kind of impact we are looking for.

Recording the video program in the Somali language

After the organizing, checking and editing of the recording program, the team have recorded the video in a soundproof studio and using the latest modern camera recording technology. We will add to the voices background music for drama and amusement to capture the attention of listeners and to create interest in what

How successful was your media project?

Here are some quotes from the program:

Sheikh Abdilqadir Mohamud Jaylani, a law professor and lecturer at Puntland State University (PSU) on 16 June 2021 at Puntland TV at a program on To discuss how the journalists, activists, and religious leaders collaborate to eradicate FGM in Puntland state Somalia said:

“Society must feel that it belongs to the country and its people must take responsibility if it wants to seriously fight the scourge of female genital mutilation.”

A journalist Zainab Abdinur Mohamed, working for SN TV who participated in a program on 16 June 2021 at the Puntland TV station To discuss how the journalists, activists, and religious leaders collaborate to eradicate FGM in Puntland state Somalia. She said:

“The majority of the society now is young women, and that young women are the mothers of today, so the educated mother should never harm her daughter.”

Sheikh Abdilqadir Mohamud Jaylani, a law professor and lecturer at Puntland State University (PSU) on 16 June 2021 at Puntland TV at a program To discuss how the journalists, activists, and religious leaders collaborate to eradicate FGM in Puntland state Somalia said:

“People need to share many stories about the problems of circumcision to being more aware because Allah said to tell them that these stories may take something or may Allah guide them.”

Sheikh Abdilqadir Mohamud Jaylani, a law professor and lecturer at Puntland State University (PSU) on 16 June 2021 at Puntland TV at a program on how journalists, activists, and religious leaders collaborate to eradicate FGM in the Puntland State of Somalia. he said:

“If we deliver on our commitment to a long-term orientation is that we focus on the little stickers everywhere that reflect the risk of female genital mutilation”.

GMC –media graduate Asia Adam, who on 16 June 2021 at Puntland TV participated in a program on how the journalists, activists, and religious leaders collaborate to eradicate FGM in the Puntland State of Somalia.

“There is a great need for awareness in the rural community, and we have to take responsibility for the safety of young girls in the rural areas that may face FGM practicing every day.”

“The theme of FGM should be included in the education and curriculum of Puntland schools, especially in the lower and middle grades, so that all young girls have a full understanding of its dangers, and this will help them avoid being subjected to it.”

A journalist Zainab Abdinur Mohamed, working for SN TV who participated in a program on 16 June 2021 at the Puntland TV station To discuss how the journalists, activists, and religious leaders collaborate to eradicate FGM in Puntland state Somalia. Said:

“Modern women today are more educated than yesterday and they are now mothers of today so they need to move on and change the path of their young girls.”

GMC –media graduate Asia’s message was after asking why didn’t stop the abolition of FGM since it has been campaigned for so long says.

“It is very difficult for people to understand the dangers of FGM, it is very difficult for them to abandon their traditional practices and take what is right which is in the interest and health of our girls. People who find it difficult to leave their culture. Religious leaders, journalists, and activist do not play their roles well. -scholars are not committed and are not aware of the FGM problem. – There are very few scholars who oppose FGM but they are also difficult to reach…It is a stereotype when you are campaigning against FGM as a man, people will tell you to declare these things because it refers to a women’s vagina“

On the other side, Zaynab’s message was.

“The culture is still strong and people still to it, the mothers feeling shame yet with their daughters who are not. Now, we are campaigning for the elimination of all forms of circumcision, it is very difficult because people have anger for leaving their culture. People who talk about these programs are seen as shameful, few of them can realise that but most of them do not.”

“This work is concentrated only in the ministry of women and ING’s, it should be everyone’s responsibility.”

“Awareness is not as it should be, it does not make sense to repeat what has been said, many people are missing their roles, and the reason it is not ending is a culture. A Somali proverb says “Cutting of habit causes Allah’s anger.” It is a bad practice that harms society, it is better to follow the path of the Prophet Muhammad PBUH, the prophet was fighting for 13 years against the bad practices and habits that existing before Islam. So the people involved should think.”

We have conducted the program in a very smooth and elegant fashion in all its proceedings and activities. The challenges which faced through the whole process of undertaking this activity was much two are worth mentioning: –

The TV programmes have been conducted in a very professional and excellent way. We have completed all the tasks contained in the activity in the predetermined timeframe and specifics. We are very confident that upon airing these video program shows, it will make a tremendous positive impact and would convey the messages intended for. We are very sure that the messages in the programme will contribute to a raised awareness in the community. We also hope that this will also create lively, engaging, informing, and productive social media debate and community discussion about the areas the program cover.