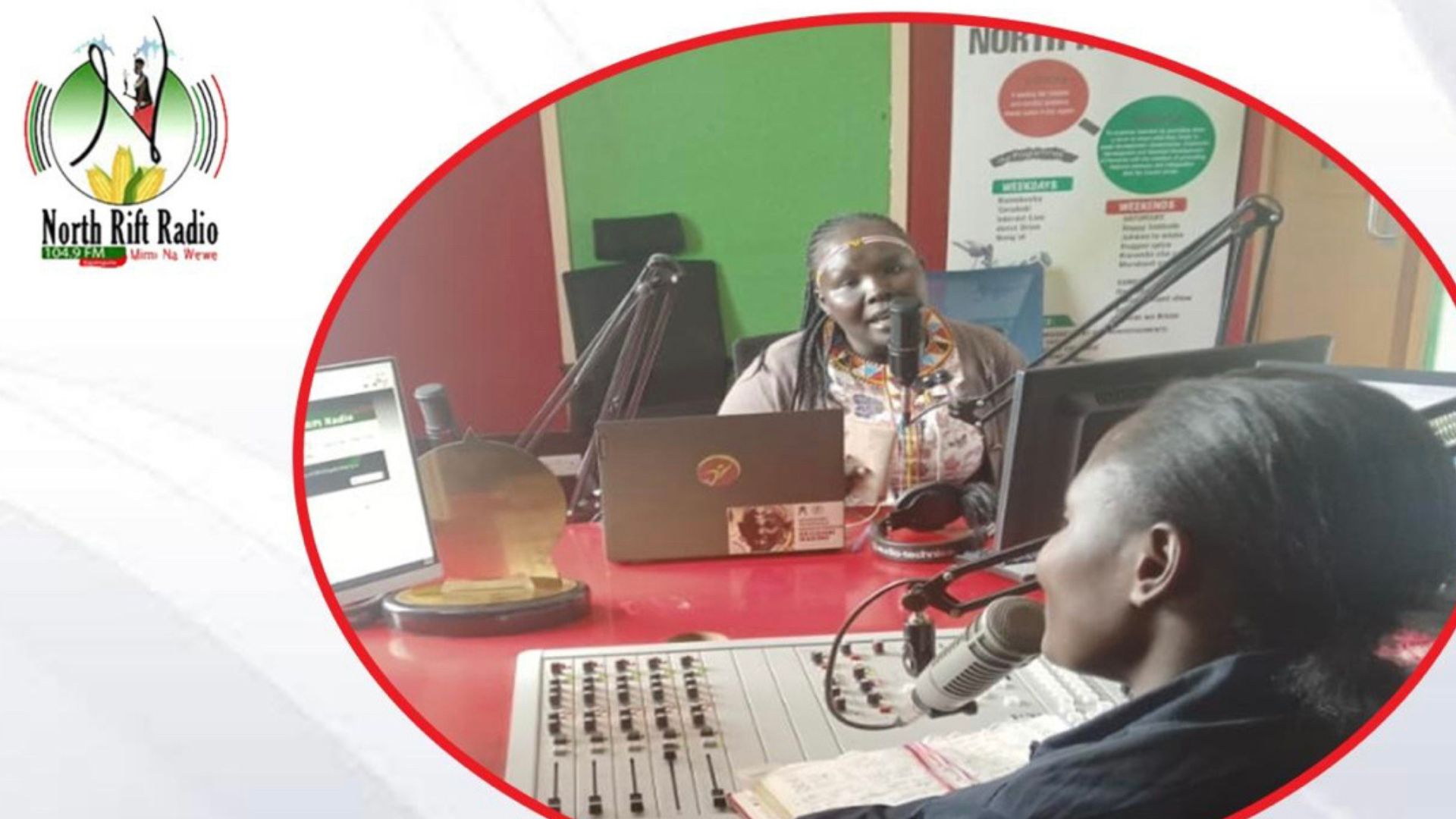 My project was aimed at sensitizing the communities in West Pokot county on the dangers of Female Genital Mutilation (FGM), Early and Forced marriages, and other harmful practices affecting young girls and women in the county, neighboring counties, and also the country of Uganda especially girls in the remote areas.

In my project, I engaged the law and constitution Teacher, activist, A Nurse, Peer educator-Mama culture, and a Reverend to get to know the role each department play in ending harmful practices against our young girls because they are the key people who can make a change in a community.

I conducted a live radio talk show at Northrift Radio which has a coverage of approximately 4.5 million to educate the community.

My interview comprised of two groups which were interviewed on different dates, the first lot of 3 people and the last had 2 people.

During the radio talk show, I engaged the law and constitution teacher of West Pokot county Mr.Philip lomong’in who explained to the community the laws governing the harmful cultural practices of genital mutilation FGM. He insisted on the importance of the community to abide by the law, based on the prohibition of FGM according to the act of 2011.

“Those who are engaging in the act and causing harm will face a life sentence, while the performer of FGM will be sentenced,-3years in jail or be given bail of 200,000 thousand shillings, and for the medics who perform the act, the will be prisoned for 3 years and their licenses cancelled.”

Lomong’in also taught the community about the importance of article 53 child rights alleging that parents who force children especially young girls and women to undergo harmful and outdated cultural practices should refrain from those acts because the law shall not favor anyone.

He insisted on the importance of community education for their children, providing for basic needs, especially for young girls i.e. pads, and soaps to be at school every day.

I aimed to inquire if there were any cases of F.G.M reported during the electioneering period, lomong’in attesting that there were no cases reported.

After engaging our audiences through phone calls and messages each one wanted to know how the F.G.M laws work for the betterment of the community and to ensure our girls are safe from the harmful practice.

It was noted that some of the girls are forced to undergo the practice due to peer pressure.

The second guest was a community counselor/peer educator (Mama culture ) Seline Kipkerker who issued a clarion call to those practicing FGM as cutters to abandon the vice as it has no value and is against the laws of Kenya.

She also urged the community not to dwell on outdated taboos like practicing FGM on young girls and women which she says may lead to early marriages and other harmful cases on their bodies and leads to tainting the image and denying the community development.

Also, she spoke about, the community using all the resources to educate young girls to defend them from being traced easily and tempted to undergo FGM.

"I am networking with other leaders in the community to ensure the county is free from FGM considering it is among the top 5 counties countrywide." Seline Kipkerker, community counselor/peer educator, West Pokot, Kenya Click To Tweet

Activist by the name Evelyn Prech enlightened the community on anti-FGM act 2016 penalties and other related activities, and also section 14 of the children act 2001 that provide the protection of children from harmful cultural practices including FGM and early marriages and how it all negatively affect child’s health, social, physical, psychological, dignity and general development of the girl-child.

Prech is one of the women who have facilitated the rescuing of most girls from undergoing FGM after learning the negative effects associated with the act.

Feedback from the radio listeners through calls and SMS during the talk shows indicated that the majority of the people have come to realise that those harmful practices needed to be abandoned and are requesting more advocacy.

She also called upon parents to be at the forefront in protecting their girls to prevent more girls from running away in fear of being forced to undergo FGM and being married as it exposes them further to more challenges that will ultimately affect their lives.

She condemned some people from the community and leaders who were campaigning using songs that criticize uncircumcised girls and women citing the importance of change within the community
Prech added that she is currently networking with other stakeholders like the global media campaign and other leaders across the country to trace cases within the community and ensure that those going against the law are punished.

The last group was from Reverend Ronald Chumum of the West Pokot church leader’s network who urged the community to change the narrative regarding FGM, early and forced marriages as well as other harmful practices affecting children.

The Reverend called upon to work with other religious and traditional leaders to de-link F.G.M from religion and to generate support for abandonment, engaging and working with media to foster dialogue about the practice and to change perceptions of girls who remain uncut seeking to eliminate all harmful practices, such as child, early and forced marriage, and FGM by 2025.

He insisted that the church must be the first group to the champion end of harmful practices as they have been exposed and know they are of no value and the law is clear on the same.

He added that during church service and other meetings with the Pokot Pastors network, they have been discussing the need to educate the community on vices which is against the religion.
Then lastly the nurse by the name, Rodah Lodio a nurse at Kapenguria referral hospital spoke on various issues including the effects of FGM, pain when giving birth, bleeding which sometimes may lead to death, and even fistula cases among women and young girls.

"North Pokot and central Pokot must be taken into consideration because FGM is still at a high rate. I am urging those authorities to take action and save young girls from FGM." Rodah Lodio, nurse, West Pokot Click To Tweet

The radio talk shows were successful given the engagement through calls and SMS sent by various people from the remote.
Also, our social media engagement was successful for my project due to the availability of my key sources and other sources who opened up without any difficulties because most people were very ready to open up and support the campaign.

Lack of education, knowledge, and understanding is what is contributing to the continued practice of FGM even at this civilized stage. Though the number of those practicing the vice in West Pokot County is reducing.

All my guests agreed to be at the forefront to champion the fight against FGM, they gave testimony about those who have abandoned cutting and become education champions in society at the moment.

The callers during the show insisted that more targeted campaigns against FGM should be put in place through the use of more Activisms, law teachers, reformed cutters, and FGM survivors as the drivers of the campaign.

The community counselor-Mama Culture –called upon more partners to join in the fight and especially provide support to young girls who are undergoing a lot of challenges mostly in remote areas.

Some of the wins during the project are being able to talk to the survivors of FGM through incoming calls and SMS. Talking openly about being ready to work hand in hand to ensure FGM comes to an end.

I had three radio talk shows sessions carried out on local radio stations in West Pokot county North Rift Radio facilitated by the GMC-Global Media Campaign this again enhanced the campaign on the abandonment of harmful cultural practices.

I will make sure I hold small Barazas with the civilized, uncivilized, key stakeholders including the legal teams, victims, and survivors at the grass root level to share the information from each party to come up with a lasting solution.

I would have to carry a radio talk show in the remote areas at the Hotspots Fgm zone in the county through outside broadcast to engage the listeners physically and have more one-on-one conversations as well as give them a chance to share their ideas and views on how to reduce the cases of FGM.

Also, I will have to engage schools(both girls and boys) by hosting talk shows one on one with those in authority and school children to be enlightened on FGM then in the future they will share the information with the community and their parents.