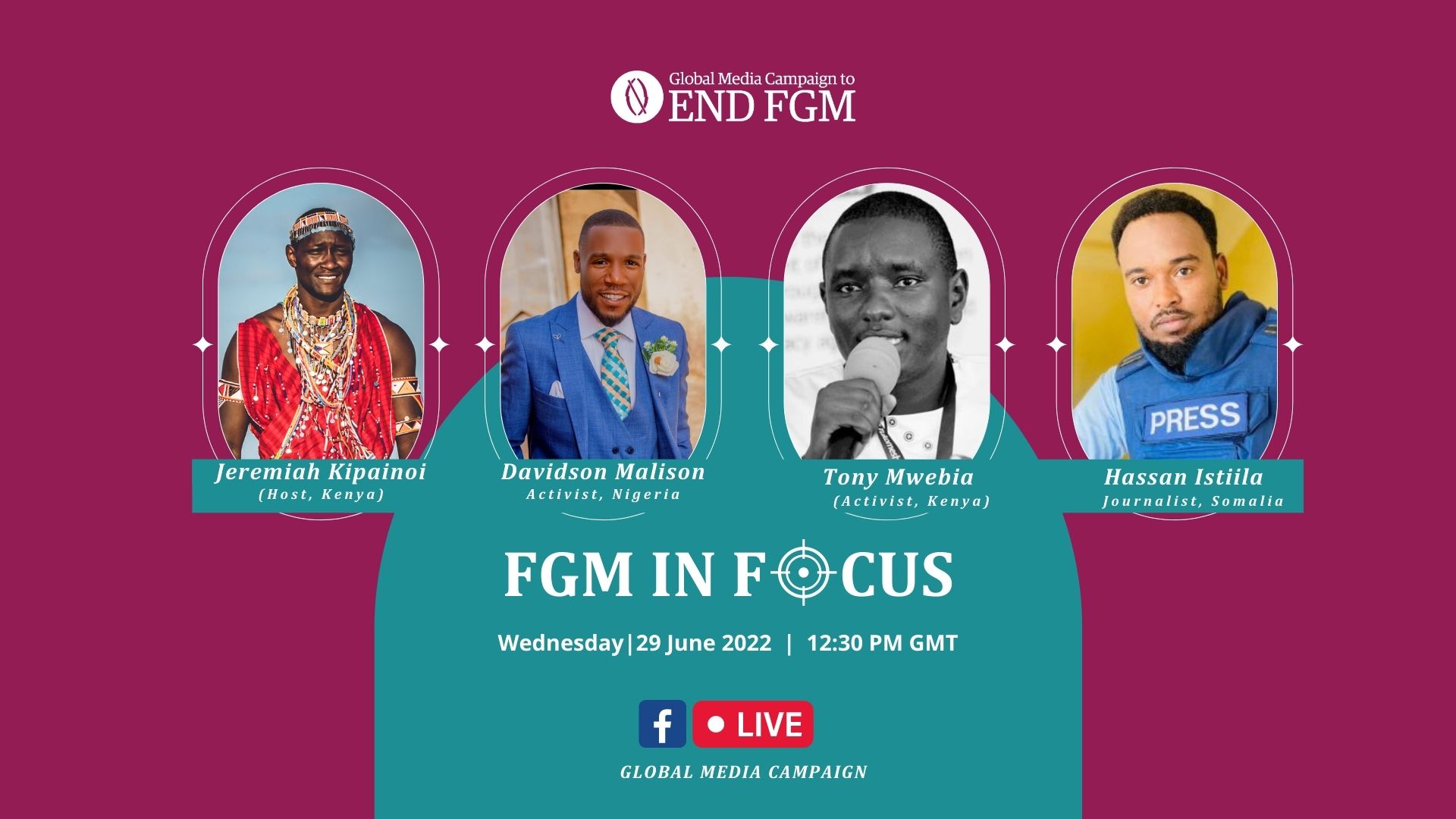 The message is simple:

Below is the conversation that took place on Wednesday 29th June as part of the FGM in Focus series:

Today we are joined by front-line legends who are fighting to end FGM, Tony, can you share with us what the FGM situation is like in Kenya?

In Kenya, we have a 21% preference rate of FGM according to the 2014 survey. This makes it look fairly low but some of our communities within that are still with a 94% preference.

If you look at estimates by UNICEF – at least 4 million Kenyans have undergone FGM. In Kenya, the population is 49 million and therefore we have a big problem.

It’s high time we came together as the people to protect the girls from this harmful practice so women and girls can live their lives to the full.

Hassan, what is the FGM situation like in Somalia?

In Somalia we have one of the highest rates of FGM in the world, 2 out of 3 Somali women have undergone FGM. One of the main reasons FGM is so prominent is because people still believe it is a religious necessity. Scholars still support the practice and this is making the preference rate very high.

And finally, Davidsons what is the FGM situation like in Nigeria?

Nigeria, we are the highest populated nation in Africa (population of 206 million – 2020). The national rate of FGM is over 20 million young women or girls. In different regions, the preference rate differs but in the South it’s particularly high at 77%.

In Nigeria, we used to have a human rights law. But it did not categorise FGM. In 2015 we had a new law that specified those who practice FGM will now face penalties. Almost all of the 36 states have domesticated the law. In those states, the law is there to stop this.

Because of culture, FGM is thought of as a way of preparing young girls for marriage and saving their virginity. We are working to re-educate this.

Tony, you work with many influencers and are running ‘Men to End FGM’ in Kenya. What will be the impact of involving these football legends?

This is a pinnacle moment. FGM is everyone’s business. We must involve men in the conversation. We have already engaged politicians, Tic Tokers, musicians, and other influences. I sometimes wonder why influences shy away from talking about FGM. I think fear is the culprit. They fear for their image and seeming to go against the culture. So this is a very good thing that these footballers are speaking out.

They are influencers, when they change their hair, other young men will copy and follow them, so they can have a huge impact on changing behaviour. This will have a big impact not only in Nigeria but also across the world.

"I would love to see more of the footballers that we love joining the conversation. This will challenge the status quo, helping to normalise the conversation on ending FGM." Tony Mwebia Click To Tweet

Davidson, Nigeria is a country full of football lovers. Why do you feel the Born Perfect campaign will be important for Nigeria?

Yes, Nigeria is home to soccer. It’s a home of legends and that is similar to Argentina and Brazil and the others. But importantly the sport of football has captured the attention of people. People go to watch football. If a legend like Didier Drogba wears a shirt – that say ‘say no to FGM’ . Then the men following them would buy the shirts too.

It is going to be of huge impact! Those guys are going to shake things up and help to end FGM.

"I am telling you it will shake the tables! I love the perspective. The men involved will move waves!" Davidson Malison. FGM in Focus: Born Perfect special  Click To Tweet

Didier Drogba was able to contribute to the peace negotiations in Ivory Coast (November 2010 – April 2011) and so these footballers can also influence when it comes to supporting to end of FGM.

Tony, why is it important to involve men in the fight to end FGM?

We have been working with many men in Kenya. We train male champions, working in 24 hot spot counties. You can not ignore the men. On recent example was in the Maasai community in Kajiado. The chief their thanked us men who brought him this information, he shared:

“I am the chief, my wife has undergone FGM, and my sisters and daughters, too. Now since your training, I understand FGM and I will end this in my community.” Chief – Kajiado Click To Tweet

As we engage men we also sensitise them. We show them videos and they understand better. Then they can easily go out there and influence their peers.

"If @MoSalah (a Liverpool player from Egypt) spoke out against FGM on social media, he would have a massive influence in Somalia, Kenya, and Egypt too. These footballers can enlighten people." Tony Mwebia Click To Tweet

I am not saying women can not make the decisions about their bodies but we are currently a patriarchal society, at least for now, so we must keep men and influential men in the conversation to end FGM.

Imam is a Muslim preacher who uses his platform every Friday. He could use this to help influence and bring an end to FGM.

"Priests have a following every Sunday and footballers have massive social media following. I strongly think we can use them and make a big difference." Tony Mwebia Click To Tweet

Bringing the young men into play to make sure men are not pressuring girls to get cut.

Davidson, how have you engaged men in Nigeria?

It’s difficult to reach men when you are in a country where men are dominating. Of course, they will take the initiatives to help themselves and not think of the other gender. So we are now talking about women being champions so they can speak out. Soon we will see this in the Nigerian Equal Gender Opportunity Bill.

There at youth-based societies that target young men that have the passion to help end gender-based violence issues.
Another way we are targeting men is to help change the minds of men so that they want to take part. When I go to a rural setting we meet the traditional leaders. I encourage religious leaders to join the campaign because they are attending to people’s needs every week. I also target the young people and then we begin to champion.

"FGM is everyone's business. You fall in love, get married and FGM is on your door. It might not affect us directly but it will affect men indirectly." Tony Mwebia Click To Tweet "We must speak up, it doesn’t cost anything to speak up and do what is right.” Tony Mwebia. FGM in Focus: Born Perfect special  Click To Tweet

In Kenya, we have anonymous FGM lines. Measures are being put in place by governments. Together we will make out societies healthier and happier.

To join the campaign you need to look for a platform where they can demonstrate against FGM.

"You might not get the result you want straight away but we have to stay determined. We are experiencing since the campaign a gradual decrease in FGM." Davidson Malison. Click To Tweet

I help take people through and I give them the platform to express their messages about ending FGM. Anywhere in the world, you can campaign. It’s a violation for any human, and so culture is not a reason.

Some people have started calling me a gender champion. People have seen light in what we are doing so they want to be a part of it.

Catch up with the latests clips here on our Youtube PLAYLIST

Don’t miss the next FGM in Focus conversation : Every Tuesday on the GMC Facebook page with Jeremiah Kipainoi!