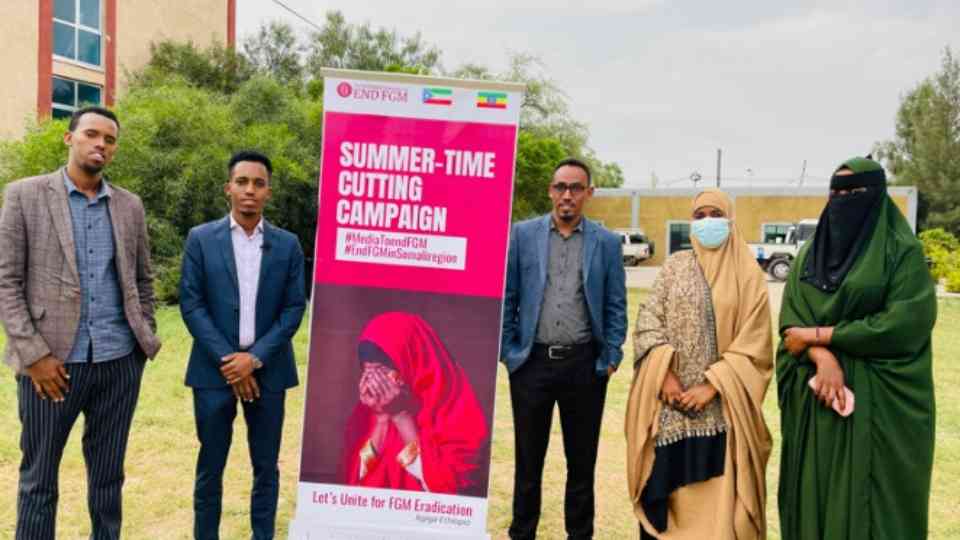 Barre Ali is a journalist working for SAAB TV in the Somali region. SAAB TV is watched in East African countries like Somalia, Kenya, Ethiopia, Djibouti as well as some other abroad countries in Europe, the USA, and Australia. SAAB TV has two million viewers.

Mr. Bare Ali participated and organised a media campaign and produced a program on the role of doctors in ending Female Genital Mutilation (FGM). The program was attended by 2 doctors and 1 midwife and 1 nurse.

The program was widely discussed about the health, psychological and mental problems of the FGM and the attended health professionals agreed that to continue the awareness of ending FGM in the Somali region.

Dr. Hayi Said expressed his gratitude and advice to GMC. And stated that he is happy to have the opportunity to take part in this program to address the issue of female genital mutilation and he suggest that such programs be continued and never be tired of speaking out against this practice of harming young Somali girls

Dr. Hayi defined Female genital mutilation (FGM) as one of the most common cultural practices in Somalia, endangering the female genitalia and he spoke in-depth about the plight of girls who are circumcised.

Dr. Abdi aziz expressed Female genital mutilation (FGM) as a cultural practice derived from the pharaonic view of the Israelites that reduced their fertility.

The fact is that this ugly pharaonic tradition has been copied from it is a clear indication that it is culturally and religiously baseless in our Somali society to understand this.

Girls are circumcised at a time when they do not know themselves and their lives cannot be decided. Because if a girl is tried to be circumcised as an adult or does not know anything, they will not do it.

As health professionals, we deal daily with patients who are suffering from circumcision at an early age, both during childbirth and during menstruation.

Midwife Faysa Ismail Osman works at the Sulad Sheikh Hassan Hospital in the Somali region on a doctor’s talk show she said:

“We are constantly and daily confronted with mothers who find it difficult to give birth. Women between the ages of 25 and 40 are the most affected by FGM at an early age.”