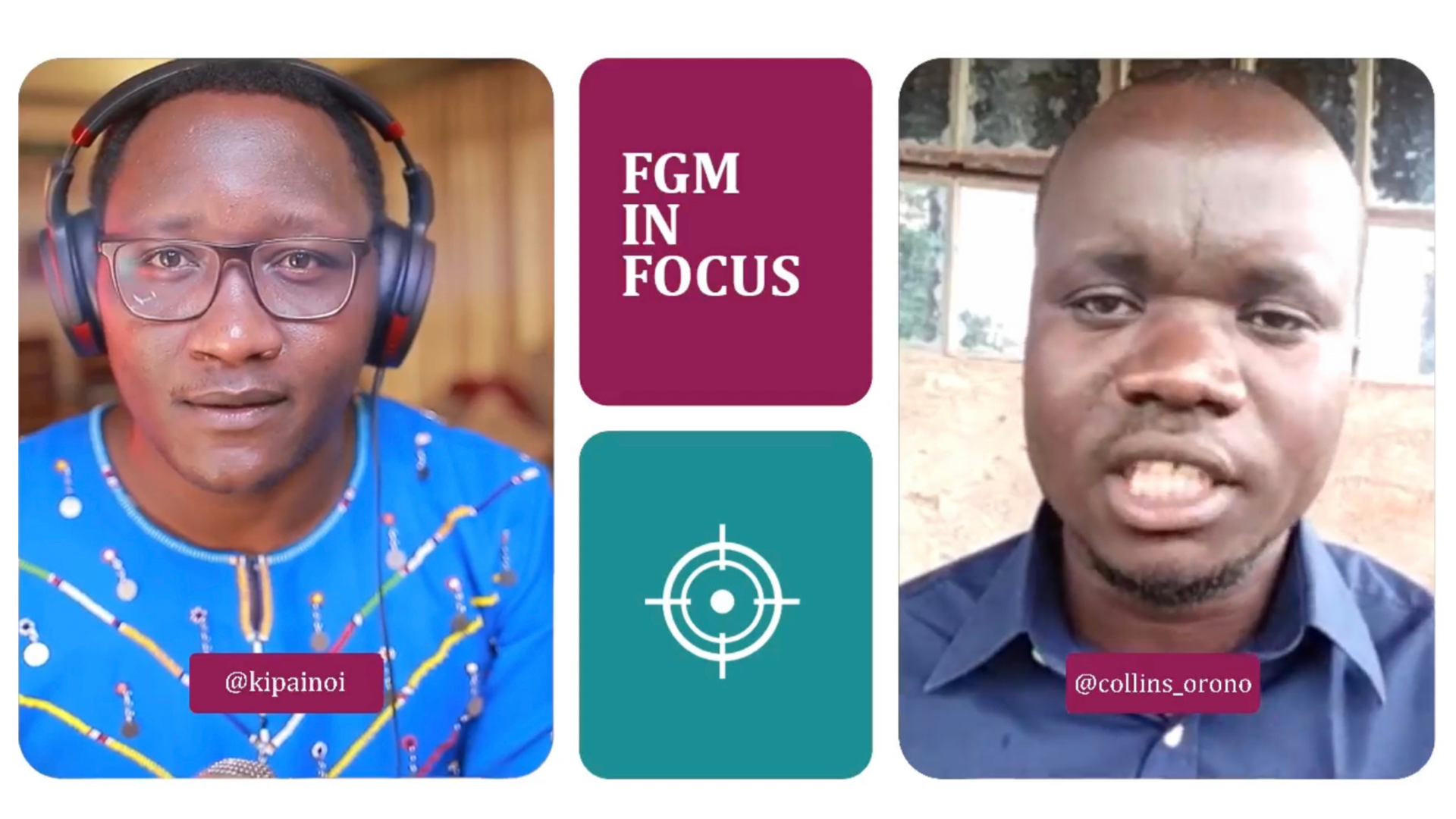 Meet Kenya’s Collins Orono. He produces three programmes that focus on children. All the programmes air on National TV in Kenya and focus on advancing the voice of the child on issues that affect them, especially harmful cultural practices like FGM.

Who is Collins Orono:

He believes Media plays an integral role in advancing the rights of the child and ending FGM.

Collins has produced many stories on FGM among them “FROM CUT TO HOPE” which highlights the plight of the survivors of FGM.

Collins has trained over 200 children in the following:

He is the producer of three National TV programmes that are aired on Kenyan TV. The programmes focus on advancing the voice of the child in issues, especially harmful cultural practices like FGM.

Collins believes media plays an integral role in advancing the rights of the child and ending FGM.

Collins graduated with a degree in Media and Communications from Daystar University (Nairobi) seven years ago. He now impressively holds over 4 years of experience in journalism and Communications. He currently works with Mtoto News and is a mentor to hundreds of children.

In December 2021, he was among the campaigners that worked tirelessly to save hundreds of girls that were about to undergo FGM in Kuria.

Live from the Kenyan-Uganda border (Western Kenya) Collins Orono joins Jeremiah Kipanoi (Head of Media and Communications GMC) based in Nairobi to interview Collins via a Facebook Live broadcast. Here is that conversation:

Tell us… What is the FGM situation like where you are?

Teso is a tribe that doesn’t practice FGM. They use an alternative right of passage for girls which doesnt involve FGM or and circumcising. Here the girls are save. The boys are safe.

Being a child’s rights activist and journalist you must come up against some challenges? What is your experience when working with children?

"In the village, if you speak of the rights of a child you might be shocked at how people handle children. Many people don't understand a child can have rights. Here in Africa, they say a child is to be seen but not to be heard." Collins… Click To Tweet "…but children have a lot of information and when allowed to speak, you realise that children can express themselves in a manner you may not be able to understand but which makes a lot of se,nse." Collins Orono: Child's rights activist… Click To Tweet "The problem is children are not given the opportunity. So through my work I allow them to tell their stories."Collins Orono: Child's rights activist and anti-FGM campaigner shares his story. Click To Tweet "When mentoring children you have to come down to their level. You can then understand their language. Children are the easiest to teach as they are curious about how things work in the world." Collins Orono: Child's rights activist and… Click To Tweet

Children are the best people to work with as they always have an impact. Children are very inquisitive they want to know… “How do you go to the TV? How do you interview people?” So it can be very rewarding.

Your TV documentary focuses on FGM survivors, can you tell us more about that work?

I sat down and was imagining what the lives of FGM survivors would look like. I wanted to show how survivors move from being cut to having hope. We started with Sadia Hussein as she is now having a powerful impact on women and girls in her fight to end FGM. Her story can inspire listeners. We are continuing to work on this series. This documentary is to give survivors hope. To not give up.

Survivors shared their experiences like mental health issues, after undergoing FGM and being isolated by friends. But gave hope by sharing how things are now better.

How do you manage working in the media as a journalist and also a being a child’s rights activist?

“Media comes from the word medium. People who work in the media don’t amplify their own stories. We work on the ground, for example, if a journalist is going to Kuria they are going there to interview people and tell the story of Kuria. This is a very key role as it brings to light the truth of individuals, and allows their voices to be heard”

“We make an impact through the media, I receive calls … I've seen you on TV I now have decided not to cut my girl… and we see people's lives changing and abandoning FGM and other harmful practices.” Collins Orono  Click To Tweet

What is your dream?

What made you join this field of work?

It has been a journey. It’s not an easy field because there are so many conflicts of interest. Especially when it comes to children. It’s tricky working with policymakers. I worked in communication and through this work, I worked with children. Seeing the children face problems such as FGM and child marriage, I knew this is what I wanted to do.

I believe Journalists can have an opinion when it comes to human rights.

It can be dangerous work, working with policymakers that might be very powerful can be dangerous. Nevertheless, we must continue to stand up for the rights of children and women and all those affected by FGM.

Don’t miss the next FGM in Focus conversation : every Tuesday on the GMC Facebook page.