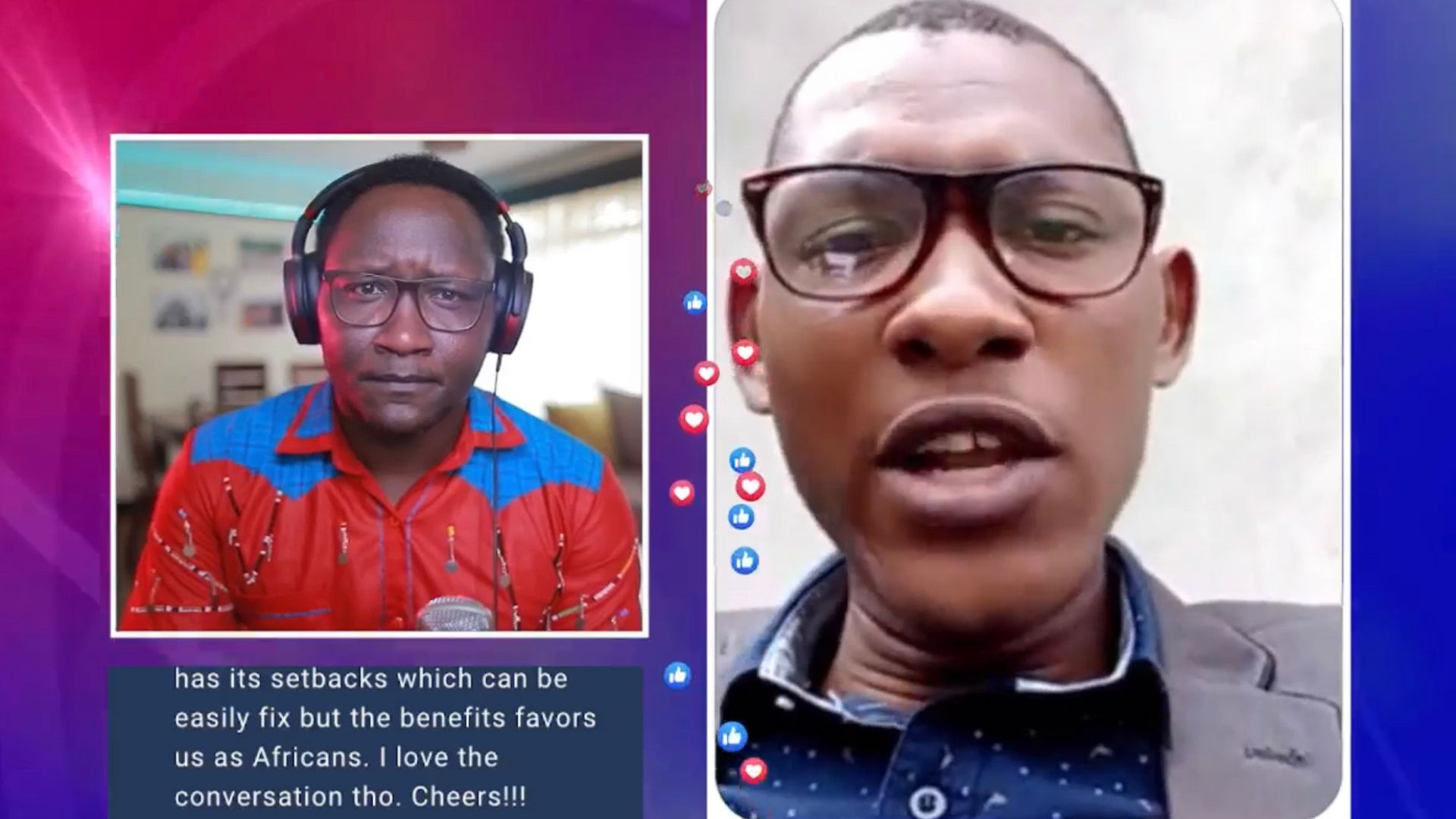 On Tuesday 28th June Jeremiah Kipainoi and William Wise sat down for a conversation updating GMC Facebook Live viewers on the current challenges in Sierra Leone towards ending FGM. This conversation included talks about the truth of what is happening at the Bondi Bush, campaigning successes, and the need for political goodwill.

What is happening in Sierra Leone…It’s unforgivable, at the age of 6 or 7 years they initiate girls to FGM. Campaigners are working hard and are now reaching the communities in the remote and hard-to-reach areas in Sierra Leone. Which is helping to reduce FGM.

"I am happy to share that we have come a long way and that girls are refusing FGM because of FGM messages they have heard on the radio, from a skit in a play, or friends."FGM in Focus: William Wise  Click To Tweet

Since the end-FGM messages are reaching our girls through the media, We are now seeing girls refusing FGM that is where we are.

People always talk about the health impacts. I feel we could also draw more attention to post-traumatic stress, and other psychological problems that happen as a result of FGM.

How did you end up as a front-line activist against FGM?

In 2019 a team from Equality Now came to Sierra Leone. They wanted to understand how much journalists knew about FGM. They came to Sierra Leone and told us more about the problems and issues of FGM. Since that training, we started to advocate against FGM. We told people they should not engage in a short-term practice that will leave long-term effects.

We started the conversation and then we joined the Global Media Campaign (GMC) and have received funding to keep this work going to help end this practice.

The term ‘Bondo Bush’ is widely known amongst campaigners in Sierra Leone, but please explain to everyone what is this and how it relates to the fight to end FGM in Sierra Leone?

This is a secret shrine built by stakeholders. They initiate young girls and women. They usually take women and girls to remote places in the bush, but it can also happen in local buildings.

“Close to my house, there was a Bondo bush there. We would hear them practice FGM all night. I would go there and tell them to stop causing harm to girls. They told me that because I am a man I should not be there.”

When women come out of the Bondi bush they face immense pain. sometimes I wept during the radio shows, I wept hearing the stories.

What activities take place in the Bondi bush?

“When FGM began, girls would be taken into the bush. They would learn about how to look after their marital homes. How to take care of the husband the home etc. But sadly instead of helping girls with good moral training, they are… Click To Tweet

In the Bondi bush, it is very distressing and chaotic there. When they want to take a girl, they will tell the girls that it will be a nice experience. They give you a beautiful picture, but when you go there you will experience pain.

Jeremiah shares a comment from one of the listeners he reads it out “Bondo is the only female tradition in Sierra Leone so why do you want to end it? If you say it is brutal, then what about the male societies?”

To my brother who is writing that message. There is nowhere in the bible that says about circumcision to girls. God instructed Moses to old cut the male child.

Can you talk about the loss of life because of the Bondo bush and how it is handled?

Last year 21-year-old woman lost her life in the Bondo bush. She is not the only one who has lost her life due to FGM in Sierra Leone. We followed up on this case. The reason for her death was bleeding. The pathologist stated that she died of excessive bleeding. Politicians said that it was not the case and that she already had complications but that was not the truth. They wanted to cover it. This young girl died of excessive bleeding due to FGM.

If you put in resistance in this culture they will flog you until you go through with the cutting. This is also the case for this story. Read more here about 21-year-old girl Masarey Sei who died on 20th December 2021 due to undergoing FGM.

“Politicians are supporting FGM to enable their votes. They are even financing FGM. In Sierra Leone, there is currently no law that can criminalise the act of FGM.” FGM in Focus: William Wise  Click To Tweet

They catch young girls and put them through FGM, after that she is then given to a man, which increases child marriage and child pregnancy. They simply have no hope.

We want to see the parliament criminalise any sole that puts girls through FGM and the other harmful practices. The childs right law is currently being looked at and the reviewed, we expect it will be amended and hope that it will mention the harmful practise of FGM. We don’t think this will change until after the elections are complete. The elections will take place next year in June.

What is so appealing to the politicians to sponsor FGM? They could sponsor other activities but so why FGM?

When they go to these communities they sponsor FGM and as a result, they gain votes and this strengthens their power. We are engaging in this conversation to help end this devilish act.

You are a journalist fighting to end FGM comes with its risks, how do you make sure you are safe?

Before now the issue of FGM was taboo. But because of engaging the Soweis constructively, it is possible to talk more. We engage leaders.

Its been many years now since the world has been focusing on FGM as an issue. We understand that during the Civil war (1991-2002) FGM was less common?

People would cut less at this time because the women were out trying to help end the war. During wartime, they stopped FGM.

Should Bondo be banned completely? Some campaigners are commenting saying Let’s have Bondo without blood?

There is nothing good that comes from the Bondi bush anymore. This practice needs to end.

The fight to end FGM in Sierra Leone is far from over. The reason is, that despite our activist efforts, we do not have the political commitment. We need the government to view FGM as a criminal offense. We can then move forward.

We need parliaments to come on board, to see the negative impacts of this practice so that we can join the other countries to end FGM by 2030.

The law change would play a very big role in ending FGM. It would bring significant progress.

In Sierra Leone, we respect the law. In Sierra Leone when they said we had to be home by 6 pm during covid times everyone was home by 5:30 pm to make sure they are home. If the law was there we would be able to say if you carry out this… Click To Tweet

No Sowie would have the guts to take a girl to the shrine if it was illegal. The law if well put in place would help to end this practice.

The president once said ending FGM in Sierra Leone would be political suicide. How can campaigners attempt to overcome this Statement?

The president did say that, but through engagement and understanding, giving them the challenges ahead, we record high rates of child mortality, because of FGM.

We do this to ensure that the government sees the need to address it once and for all. Political goodwill would go a long way to help end FGM.

Can you share a word of encouragement with all activists and journalists in Sierra Leone?

I know this conversation goes on and on, but I want to encourage all teams and activists. I want to say there is nothing harder than the beginning. We need extraordinary effort and time.

“We are getting there. The taboo barrier is breaking so let us continue. Let's talk educate and create solutions. It will be tough but if you believe in what you believed in just go for it.” FGM in Focus: William Wise  Click To Tweet

It can be done, play your parts.

“The fight we are fighting is also a fight against corruption. The politicians don't want us to talk about it. But we must play our parts. If we play our parts we will celebrate that our future generations have been saved. If we press on… Click To Tweet

Don’t miss the next FGM in Focus conversation : Every Tuesday on the GMC Facebook page with Jeremiah Kipainoi!