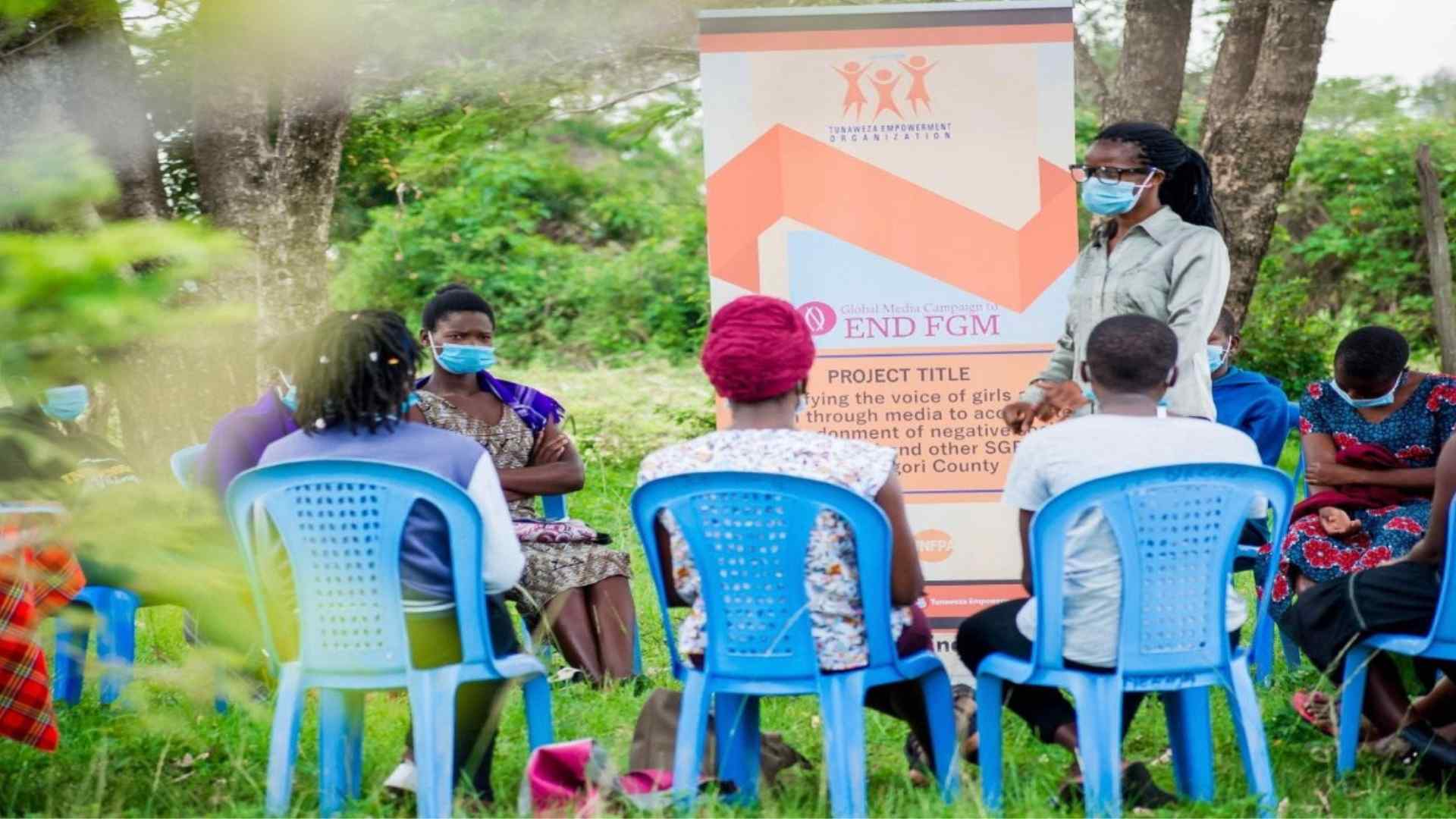 With support from the Global Media Campaign to end FGM on International Day of the Girl, we held a presser with Radio Togotane 88.3FM together with 20 school-going girls drawn from Kuria – Migori County, who were able to air out challenges affecting them including harmful cultural practices such as FGM.

They also shared how they request the government and stakeholders to urgently address and fast-track protection of their rights in the region being the voice of the girls online on this important day for them.

We also hosted the assistant county commissioner Kehancha division Mrs. Lilian Wabala who also took her time to hear from the girls and was able to assure the girls of protection as she also pledged to lobby fellow administrative officers in ensuring concerted efforts and rule of law in ensuring safety and well-being of the girls in Kuria.

The press statement of the girls was also aired live through the radio and later ran throughout the better part of the day in the news.Media activity was able to reach out to 650,000 listeners being a public holiday in Kenya as well most community members at home and radios turned on.

Immediately we did a presser on Radio Togotane 88.3FM with the selected girls, community stakeholders and members kept calling in and sending Short Message Services (SMS) to the radio as they pledge to support the protection of the girls right in Kuria especially towards the abandonment of FGM.

The most amazing one was from the coordinator of the cultural leaders of the four clans in the Kuria community Elder Zacharia Marwa who called and acknowledges the efforts of stakeholders are doing in engaging them to denounce FGM in Kuria citing from a previous meeting in Kuria. He also added that they are ready to mobilize all the cultural elders as their coordinator to denounce the practice in the Kuria community since they are the custodians of the culture. He said over the radio in a call that they are currently planning to back a 7-day journey to the mountain in Kuria to go request their gods to enable them to abandon the practice and adopt other positive cultural practice that will promote development in the Kuria community.

Radio Togotane radio 88.3FM Mr. Lucas Mwikwabe host doing a presser with one of the girls during the international day of the girl 2021 (Vallery Alexina Robi –in a black dress)

Radio Togotane radio 88.3FM Mr. Lucas Mwikwabe host doing a presser with one of the girls during the international day of the girl 2021 (Sophy Nyagetende).

Radio Togotane radio 88.3FM Mr. Lucas Mwikwabe host doing a presser with one of the girls(Faith Boke) during the international day of the girl 2021. The presser was aired live on radio and news on the better part of the day.

Assistant County Commissioner Mrs. Liliana Wabala listened to the issues affecting girls in Kuria on the international day of the Girl before engagement with the radio to pledge support to protect them against FGM.

Being an End FGM activist from the Kuria community to some extent running a media project has posed to come along challenges coming from a rural setup where there are poor internet issues and the majority of the people I advocate for or with has doesn’t have much knowledge on social media campaign strategies, though support on the radio has been amazing in tackling this challenges.

In some incidents, since political goodwill is an issue in Kuria most politicians do get some thoughts that are either spoiling for them since the majority of them supports FGM in Kuria because of votes especially at this electioneering season approaching in Kenya.

Since Global Media Campaign to end FGM started funding my campaigns in media towards the realisation of full eradication of female genital mutilation, many people in the community are now joining the campaign to openly declare support to end FGM this has come as a result of the impact of the local media activities been having with the radio Togotane 88.3FM together with my fellow activist Christine Alfons in Kuria – Migori County, Kenya.