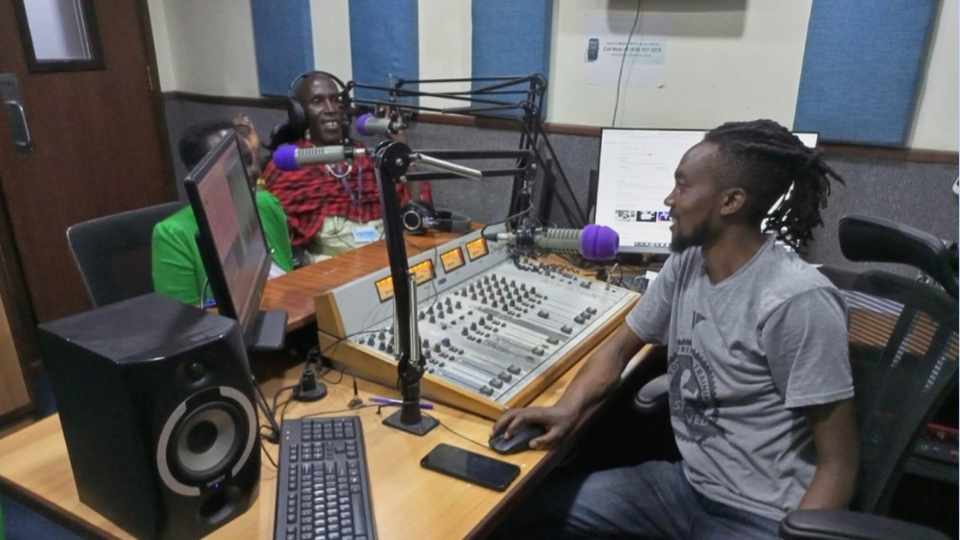 “FGM has been sustained by secrecy – and the fact that the horror of mutilation goes on out of sight of influential men has allowed it to continue. But once these men have seen the reality of FGM for themselves – they can help end it by reaching out to hundreds of thousands of people via local media and ordering an end to FGM. Men like Chief Kilamia Sapuda are key to ending this.”

The project’s main purpose was to engage the local Radio (Mayian FM). I, being an activist and Survivor, talked about the effects of FGM and Teenage Pregnancies, which are becoming so common in Narok County. I also invited the chief of Morans (warriors).

“All this was done in order to ensure that a girl moves to another stage ready for marriage after the cut but many girls didn’t attend school and many were getting married immediately after the cut. After attending different seminars and training, we saw photos of girls dying while undergoing the cut. I, being a traditional leader, decided to join activists in order to save our young girls and daughters.”

Kilamia Sapuda is the head of Morans (Masai warriors). He was chosen due to his vibrant, energetic, and vocal personality. Being the head of 6000 Morans, he plays a key role. He, therefore, doesn’t miss any important community functions or ceremonies and he is a key decision-maker.
Following various workshops and training from Naret Intoiye CBO on how to achieve a gender-equal society and end harmful practices, he got so much interested in campaigning for the same.

Kilamia was inspired by the Tanzanian president who is a woman and uncut. He said in one of the community dialogues:

“Our neighboring country’s head is a woman who is not cut. Why then subject this to our girls? Girls who are not cut, can complete school and achieve their dreams.”

He acts as our ambassador at the community and county level because he strongly stands and fights against FGM. In his last talk, he publicly said that morans should marry uncut girls for a better future, which without health complications.

Kilamia is also the chairman of the Nyumba Kumi initiative. This is an initiative started by the Kenyan Government at the village level so that every 10 households has a leader for good security, peace, and good relations amongst themselves. Being the head of all the others, he ensures that no girl is subjected to FGM.

Having the chief of Maasai morans as a new anti-FGM campaigner will enable us to move into different areas. Together, we will advocate for girls’ rights and ensure that all harmful practices, especially FGM, come to an end. As part of his daily role, the chief has a platform to hold and chair community dialogues (including men and women), organizing mentorship workshops for girls when schools are closed, attending public participation/events, and letting people know that he stands strongly against FGM and using media (local Radio, local TV) to create awareness on effects of FGM. He has promised to use his position at the community level to take charge and talk to people on ending FGM.

My next Media Campaign:

Next time I will go to the studio with an ex-cutter because they are experienced on the reasons why girls are being cut. They can also share their stories on why they have opted to stop. This way, some of the questions that were being asked can be answered by them. They will be able to give a clear picture of how the practice is being done and give reasons on why FGM should end.

Follow up interviews with the Global Media Campaign to end FGM about this story or any other story on our website please contact Jeremiah Kipainoi, Director of Communication at GMC based in Kenya

Or Maggie O’Kane Executive Director of GMC in London.