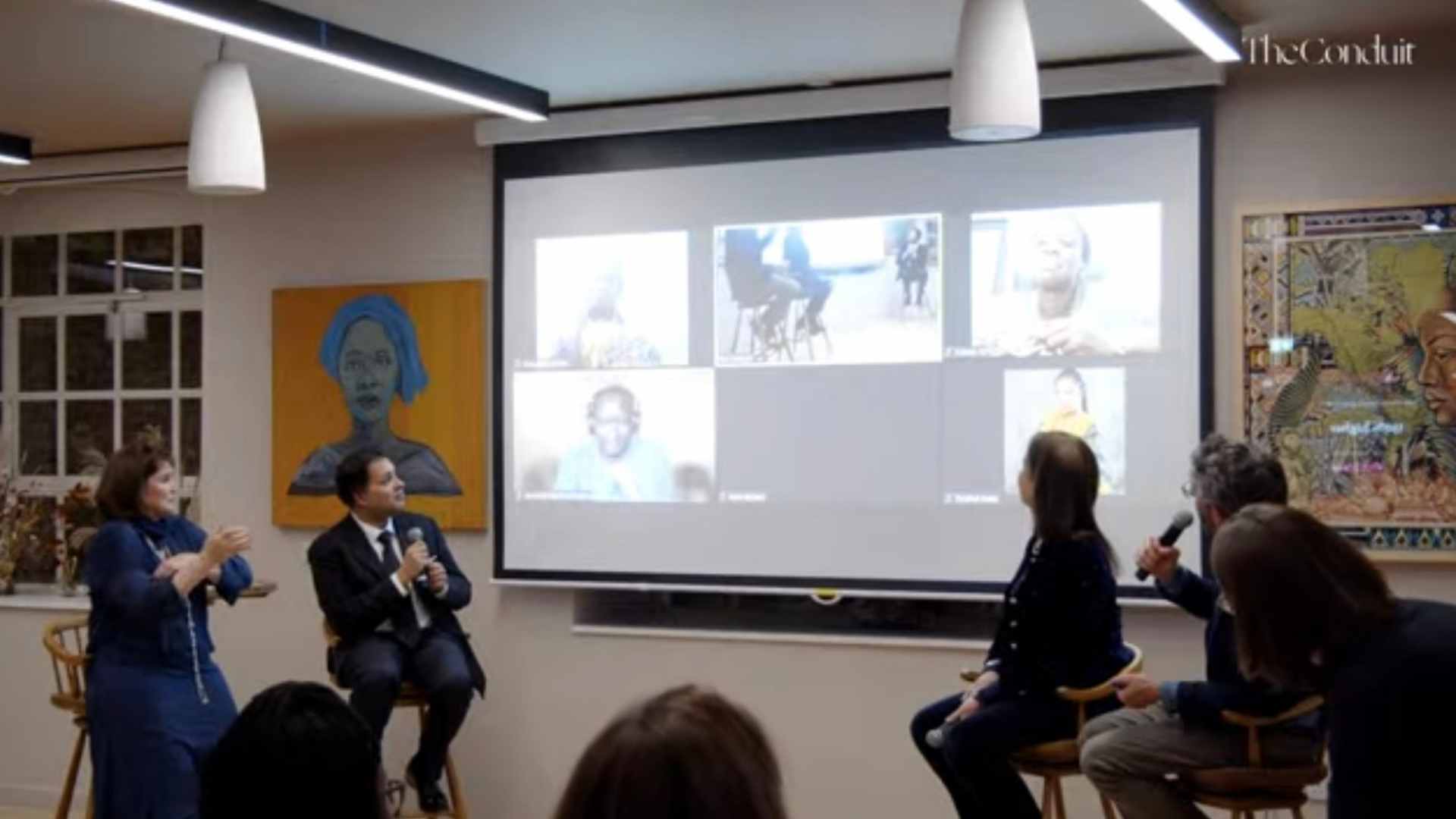 This special evening, held on Thursday 3rd February, marked a significant milestone in the Global Media Campaign’s efforts to end FGM. The GMC team – including Director Maggie O Kane and six leading campaigners from Sierra Leone, Kenya, Nigeria, and Somalia – joined this conversation which was presented to a group of keen listeners live from the Conduit Club in Covent Garden. Other key members of the panel also included the BBC’s renowned international editor, Lyse Doucet and the chair of the Global Media Campaign, the human rights lawyer, Dexter Dias.

A very special thanks to anotherwaynow.com whose brilliant team Denise Barren and Ella Stacey made sure that the event passed off flawlessly. Impeccable logistical support from Anotherway Now is offered to causes and organisation they believe in. We are honoured to be among them.

Paul – our moderator and the co-founder of the Conduit Club – opened the evening by stating, ‘We not only have a responsibility to care for the climate and environmental concerns that the world is facing, which poses threats to future generations, but also to care for the lives on planet earth, working to build a better world for those who inhabit the earth today.’

Paul also shared one of the values of the Conduit Club – an African word “Ubuntu”meaning ‘I am because we are.’ This message of connectedness and humility unitesall of us who live on our planet today and encourages us to lead lives in which we make a difference!  The evening highlighted that through international connections we can have the power today to make changes in faraway lands and to ensure that human rights are not violated.

Directly prepared questions were asked to the campaigners via zoom and below are some key messages from our speakers.

Jeremiah, Head of Communications GMC and long-time passionate campaigners talking about the worry for the Easter holidays ahead:

‘Here in Kenya, we have a seven week holiday, which means that the girls can be cut and healed before they return to school, lessening the threat of children’s officer’s knowledge that FGM has taken place. We now need an even bigger campaign over this period. We want to work at both international and national levels to add pressure to ensure that those that are supposed to do their job do them. The use of pictures through social media makes these events undeniable to those that have responsibility.’

In Somalia and Mali, it is the Ramadan celebration and not Easter which makes this time more dangerous for girls as they are off school for April.  Read more concerns over Easter cutting here.

Ayo described how she started campaigning seven years ago. She was an undergraduate student at the time but she was passionate about making a change and so she used to go door to door to ask individuals to end FGM. Today, Ayo uses TV and Radio as well as social media to raise her voice. She frequently receives calls of thanks from those who have heard her message on the radio. For example, people call to say thank you: ‘…because of your show a year ago I did not cut my girls.’Through the media Ayo is making a change and she’s engaging with religious leaders to share her message that ‘Culture is not static and that voices need to be heard actively.’

Ifrah spoke about her work in Somalian refugee camps where FGM has a 98% prevalence.  She told us that last year, in just two weeks, they lost seven girls to FGM. She also told us that the COVID-19 period had been a very difficult time but thanks to 200 radios donated by GMC the ‘End FGM’ message was still being broadcast. She also reminded us that women will often get cut during giving birth. This can happen in remote villages where women sometimes refuse to go to hospital because they are told tales that during a caesarean doctors may take organs from them so there are still fears around giving birth in hospitals. ‘To stop this happening we spread the message via radio to encourage women to go to the hospital where they will be safe away from FGM, we share true stories on women that have been cut and who don’t survive the bleeding.’

Ifrah also talked about the loss of Fartun Hassan Ahmed, a 13-year-old girl, who died last August after undergoing FGM. She was always by her father’s side and was said to be his right hand. Read more here. Fartuns Father is now working with GMC to end FGM in his community.

Ifrah finally went on to remind us how far the campaign has come:

‘When we first started, men were ashamed to talk about the female genitals and avoided talking about FGM but today, since the Global Media Campaign, we have hundreds of male activists and journalists working to end FGM.’ Ifrah Ahmed… Click To Tweet

Lucy Anne talked about how throughout history the media has had the power to bring about change. She talked about how it has helped African countries before, for example in the fight to cure Ebola. The media, in the form of radio shows helped the message spread faster tha there is a cure and this sickness became a thing of the past.

She explained why FGM is still happening and touched upon community peer pressure,

‘In the rural communities, every woman is expected to be cut. If you are not cut, you are seen as an outcast and no longer a member of the community. When girls are not cut it can mean they are not allowed to engage in community ceremonies like marriage or being a guardian in the village and many more village community privileges. FGM enables their sense of belonging.’

Rugiatu went on to describe the death of 21 year old  Maseray Sei who, despite already having had two children, eventually gave way to peer pressure and agreed to submit to FGM. Maseray simply wanted to be a part of her community and was tired of the mockery she endured every day so she decided to ask her father to allow her to be cut. He resisted as it is expensive, but she saved up anyway. Tragically, Maseray died of complications following this procedure just before Christmas on the 20th of December 2021. Read more here about Maseray. #RememberMaseray

Key Questions to the panel: –

A member of the audience asked ‘What can the government do to help work with overseas governments to stop this?’ Lucy Anne responded, ‘Today we handed over a letter signed by over 130 companies to the government – we need to make FGM illegal in Sierra Leone.. we need to join the rest of the world and look at culture and keep what is good about it and let go of what is bad… to do this we must change the way that we see culture.’

Another audience member asked which countries are involved and what do you need? Maggie O Kane replied ‘We are in Kenya, Nigeria, Sierra Leone, Mali, Guinee, Somalia, Ethiopia, and The Gambia. We are now also in Liberia where we have found 40 willing activists, and in May we will be going to Chad – but we must tread carefully there as it may be more dangerous. Only 300 dollars enables us to run a media campaign, at present money is the only thing stopping us…’

Why is FGM still happening in the UK? Our panellists argued that it is fear of being ostracised and being shut out which means this still continues despite the law.

Final comments from our Panellists:

Talking about a GMC video that showed a girl screaming during the cutting ceremony:

“I speak for everyone when I say that scream sent a shiver down my spine. In the 1980‘s I lived in West Africa and FGM was not spoken about at all!” Lyse Docuet @bbclysedoucet @ConduitClub @GMCEndFGM Click To Tweet

The fact FGM exists doesn't mean that it is right. There is no distinction between human rights and women's rights.’ Dexter Dias @DexterDiasQC @ConduitClub @GMCEndFGM Click To Tweet

‘ …at Harvard, we ran an association experiment and we asked those from west Africa what words they associate with the word sex most responded pain or fainting…this was a big concern! If women cannot enjoy sex and say that they might faint because it is so painful we can understand from this that female genital mutilation is about sexual control. It is the social control of women sexuality. We in the UK can logistically support campaigns but it starts with the women saying .. “we have had enough” so that they can do what they need to do.’

‘Most campaigners have had threats on their lives. This is incredibly dangerous work.’ Dexter Dias @DexterDiasQC @GMCEndFGM Click To Tweet

Football lovers… Watch out for our newest campaign! We are now involved in the World Cup.. #BornPerfect is our newest campaign involving players to stand up against FGM and state that their daughters are born perfect. Read more here.