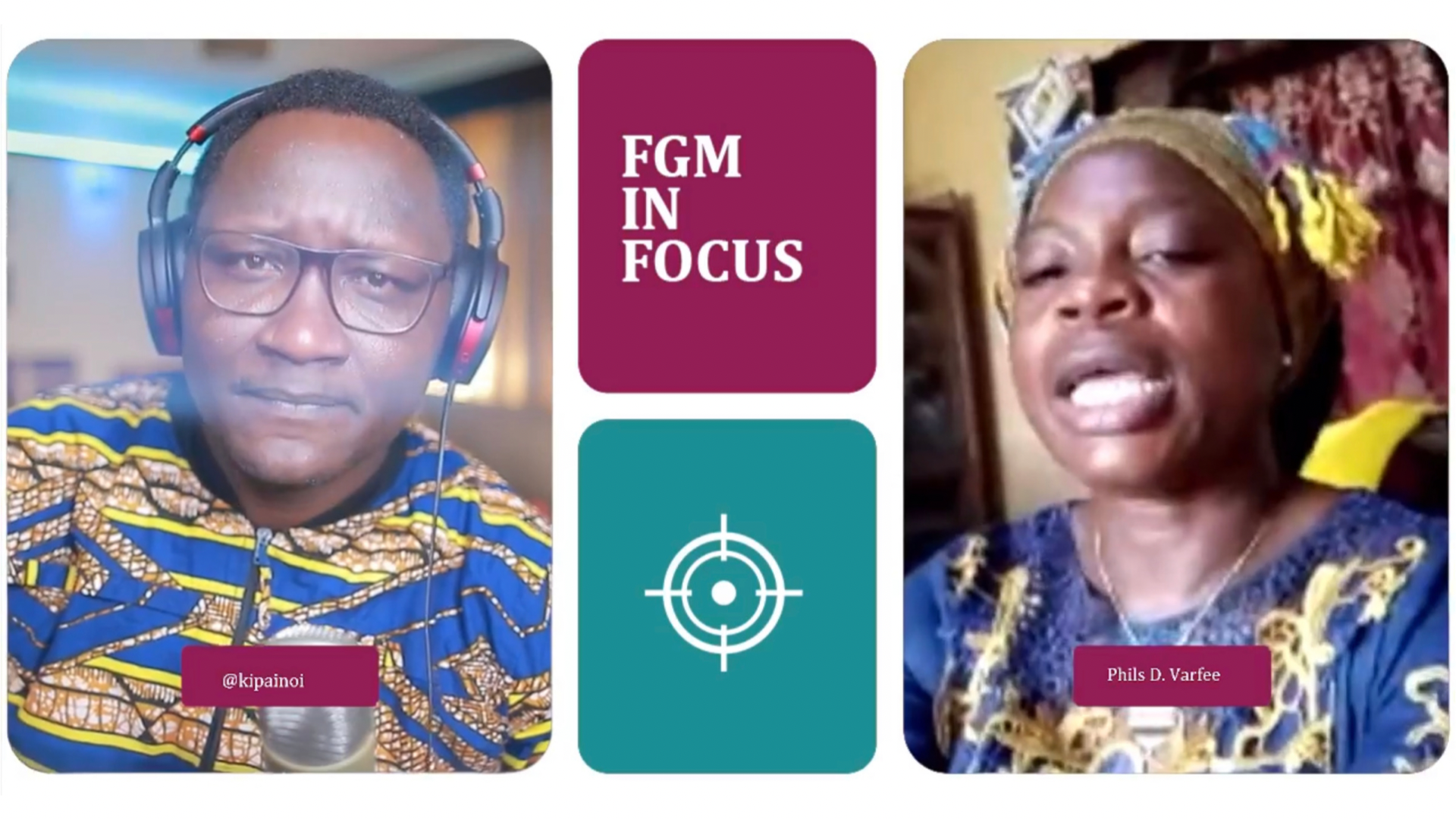 Since 2009 Phils D. Varfee has been working with women’s groups and youth groups to empower them and in 2012 she started working on talking about the issue of FGM. In December 2021 after a cross-border conference that was sponsored by UNFPA Phils D. Varfee was inspired to work even harder to raise her voice on this subject and fight for the end of FGM in Liberia.

“Since coming back from Nigeria I have the passion to work to end FGM.”

Her work with pastors wives:

"I have been working with women in the church and pastors' wives teaching them about the ill effects of FGM. This is effective Because pastours wives have their own congregation. This is because the women are the ones that can pass on… Click To Tweet

Why do people practice FGM in Liberia?

What is the main driving force in Liberia?

The driving force is culture. This is a practice that has been passed down. Not knowing the effects, not knowing the harm. When we started we asked the religious leaders and chiefs why it continues and they say it is our culture, it was the practice of our forefathers.

“Communities in Liberia want to control the sexual desire of women. It is believed that when women and girls have undergone FGM when the woman is married she will stay with her husband and not stray.” FGM in Focus: Phils D. Varfee  Click To Tweet

So those are the main reasons given.

How does it feel working in Liberia? What does it take to organise a rally against FGM?

In Liberia, we have an issue of gender inequality. Women and girls are threatened that if they do not get cut they will be an outcast, and they will not have jobs in the government for example.

The ministry of gender is taking action against the issue of FGM. The leaders even sign documents to say that they will stop FGM but once they return to their counties and towns and villages they continue to allow the practice to be carried out on girls.

So we came together as activists to say that these people cannot sign these documents and then do nothing to stop FGM. So we have been talking since last year in December. We had a cross-border training where trainers came from Sierra Leone and Guinee, this was sponsored by UNFPA. From the UNFPA-sponsored cross-border training, we are all motivated. We believe we can carry out the campaign now. We saw videos during the training that were awful, they gave us more passion to work to help end FGM.

When we came back from the UNFPA cross border training we put ourselves together. We started having our own meetings. We can not continue to speak in secret and meet undercover. It is our time to speak out. We can educate our people and… Click To Tweet

Phils wanted to be very clear…

“One thing to mention is that we are not against our culture. We love our culture. We are against the harmful practice of FGM.” FGM in Focus: Phils D. Varfee  Click To Tweet

Years back they were carrying the girls to bush school where they educated girls on how to look after their husbands, and how to look after their homes. Educating girls for two to three years. They were taught how to respect the elderly and their husbands. That is a practice that is a culture and that is very good. But when it comes to the practice that is harmful that is what we are talking against. That is how far we are.

Part 2: The Challenges that Phils faces as an activist in Liberia – financial and security

Lamin Sanneh asked ‘How did your advocacy on FGM be seen by religious leaders, did they usually support the crusade or feel very adamant to support this initiative?’

We need to get people on board. It is a challenge. During the easter campaign, we had a pastor who was part of the cross-border training and he is joining. It’s a process. It will take time, some are getting on board.

What platforms have you been using to get your message out? media and on the ground?

We are having radio talk shows and also working with women in the church. Especially when they are having conferences. I have gone to the villages, especially where the practice is nearly 100%. I have meetings one on one with women.

I explain to women one on one 'I know you have gone through this but you don't have to put your girls through the same pain' and the women often reply: 'Thank you for coming to tell us the truth, this is an eyeopener.' FGM in Focus:… Click To Tweet

Lisa from The Gambia asked the question-

“Passionate activist I love it! My question is What reaction do you get from survivors especially the older people?”

Survivors were calling when we did the radio talk show. Some survivors shared that they are so happy that people are now talking about FGM. They went through it and they never knew. Most of the older generations went through it at the age of 3 or 4 years and they have suffered from the practice.

“Some survivors of FGM regret that it happened to them as they had no choice being so young. So some of the survivors are now also speaking against FGM.” FGM in Focus: Phils D. Varfee  Click To Tweet

On the day of the girl child many survivors were with us.

Is it safe in Liberia to be campaigning against FGM?

When it comes to the issue of security it’s a challenge. When we started going live on air and radio. It was a challenge for us. One of our guests was so afraid to even sleep because they started to threaten us. They said we were talking against the culture, but that is not true, it is only the practice of FGM.

One radio station was burned down. But police investigations are still on the way to knowing whether or not the fire was related to the campaigning.

What we are doing will save the future of our girls, although the security issue is there, we will continue because this practice is causing harm for our girls. It’s a process.

"When we are in the street people say they are the ones that are against FGM. We feel it. But we know that we are doing the right thing. We want to help our girls and stop this harm. So we will continue." FGM in Focus: Phils D. Varfee  Click To Tweet

Listener Lamin Sanneh asked – Is there political will to end FGM in Liberia and will the police follow up on reports of FGM?

Right now as we speak the government of Liberia has put a ban on FGM for three years. When it comes to the political leaders they will do anything to stay in power. They feel if they talk up against FGM they will no longer be supported and so they will no longer have the power.

“Some politicians in Liberia don't put their girls through FGM. Some even have their girls growing up outside the country. But to keep their votes they support villages and communities to continue the practice of FGM.”FGM in Focus: Phils… Click To Tweet We want to get a law passed in the house that says FGM must be abolished.FGM in Focus: Phils D. Varfee  Click To Tweet

“Some girls after the cutting of FGM will bleed until they die. We are continuing with this campaign, we are going forward!” FGM in Focus: Phils D. Varfee  Click To Tweet

Final words from your end Phils:

Thank you to our sponsors, UNFPA, and to all our colleagues in and outside of Liberia who are fighting to end FGM. We are not giving up. FGM must end. Thank you I appreciate this time, thank you for hosting me. Thank you and God bless you.

Don’t miss the next FGM in Focus conversation : Every Tuesday on the GMC Facebook page with Jeremiah Kipanoi!