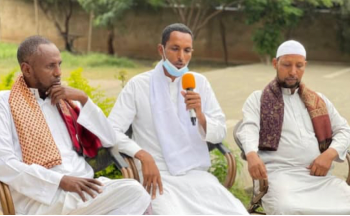 Bare Ali qaaje, a Journalist based in Jigjiga and works at SAABTV organized a panel discussion about the challenges of the draft Fatwa to address the problems of FGM and ways to end FGM in the Somali region as part of the commemoration of African child day.

Bare invited the panel members from the Sharia court, regional supreme Islam affairs, and parliament members.
During the discussion, panelists have discussed the main challenge of drafting a fatwa to address the problem of FGM and to end FGM.

There is a different view between religious leaders when on the issue of FGM practices. Some may argue it is from religious principles while others defy that argument. But most religious leaders agree FGM is a cultural practice and it is must be ended.

Dr. Bashir who is a member of the regional parliament welcomes the campaign and the drafting fatwa.

“I urge the committee to finalize the draft then the parliament will pass soon. The drafting fatwa will facilitate to hold accountable to any who violate the right of women’’.