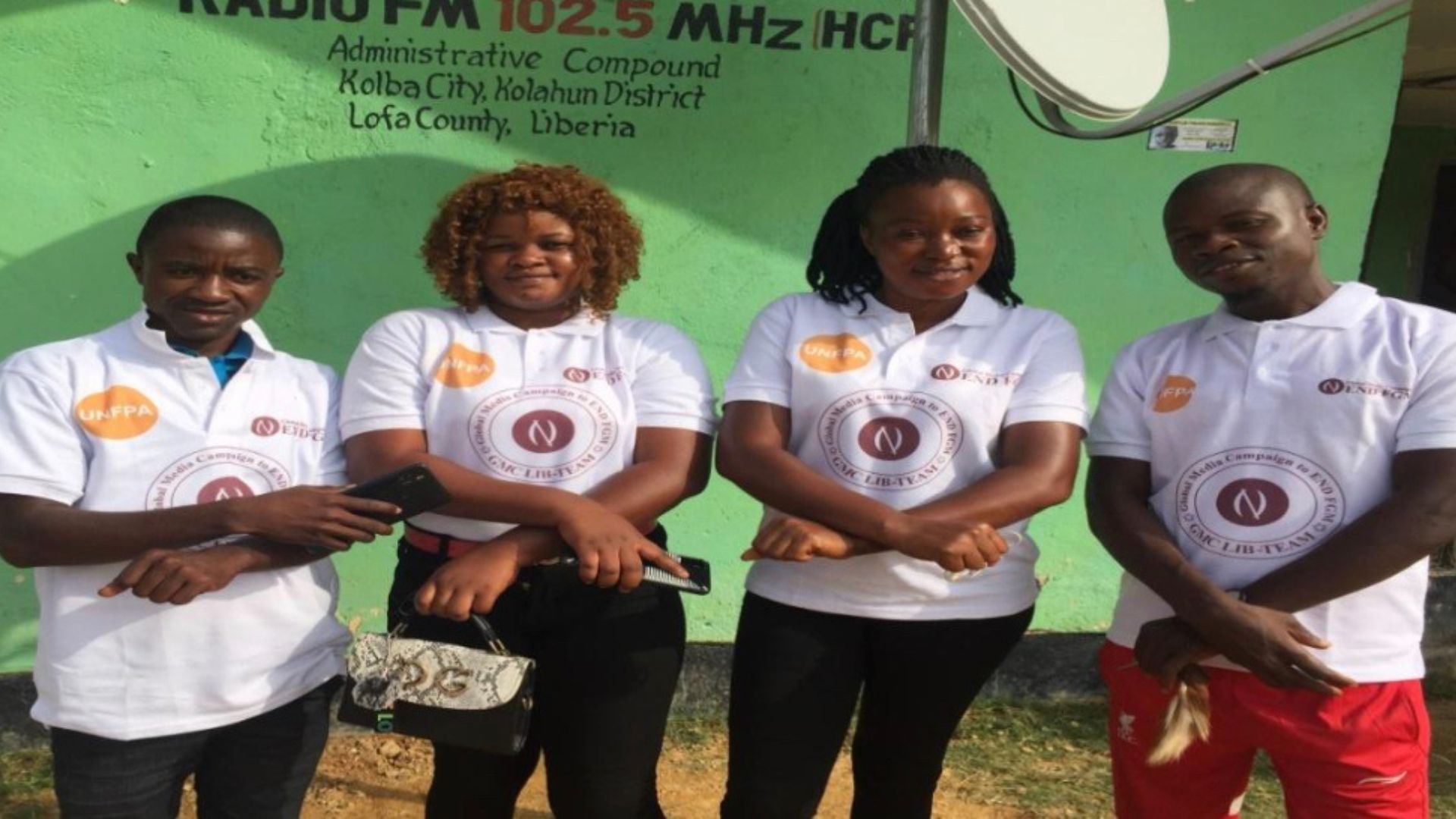 Seven weeks after Liberia’s first ever end-FGM media campaigns, campaigners and members of the Global Media Campaign team had a call to discuss how things are going. The conversation touched on the listener’s reactions, community impact, and ways to move forward with the campaign.

“Because this is so new it is essential to take carefully planned strategic steps necessary to bridge a support system and enable the campaign to continue safely.”

Introducing some of the Liberian campaigners:

Liberia, similarly to many other African countries has been struggling from the effects of FGM for many years. FGM is therefore seen as a traditional practice.

"We are Africans we will not be against our culture, but FGM causes serious harm to our girls." Phils Varfee Click To Tweet

The Global Media Campaign began sponsoring teams this April in the Northern region where the FGM prevalence is very. County’s including: Voinjama, Foya, Vahun, and Kolahun There is therefore much work to be done but all campaigners expressed their passion and determination to end this practice that is causing deaths and countless painful complications for Liberian women and girls.

Phils Varfee attended the Media Campaign Academy (FOYA DECLARATION) training in December where activists from Kenya and Sierra Leone met with keen Liberians to discuss the issue of FGM, and how to be involved in the campaign, and offering inspiration and hope to end this practice in new regions.

“Since the training in December, with activists from Sierra Leone, I have been very motivated.”

“We were shown images, so terrible, of children who had been cut aged 9 months and 2 years old. It was so terrible. It created a passion in me to help end this suffering.”

"Change doesn't come overnight. FGM is currently seen as a good practice, even though it causes harm, so we must take our time, and stay focused on saving our women and girls." Phils Varfee Click To Tweet

"We had so many calls, men express that they had held this in their minds a long time since they have seen the effects of FGM and the issues that it brings." Phils Varfee Click To Tweet

“Some men called up to share they will now not cut their girls.”

Since the campaign in April Phils shared that she receives negative remarks on street corners, but expressed that she is not deterred. She is keen to find new strategies that will help change mindsets and end FGM in Liberia.

Beatrice shared that her passion to become an FGM campaigner began when she witnessed a little girl losing her life due to excessive bleeding that was caused by FGM.

"This is my dream to end FGM, I saw a little girl lose her life."Beatrice Kanneh  Click To Tweet

Despite this being a dream for Beatrice she shared how it is not easy to begin to change something so deeply rooted in the African culture.

"Neighbours and friends approach me- they say – why would you say that on the radio?" Beatrice Kanneh, a end FGM campaigner who is determined to not give up the fight to save girls from FGM. Click To Tweet

Despite this Beatrice spoke with passion and determination.

"If other countries can do it, we can do it, so we will TALK TALK TALK. This is only a business that is harming our girls and we will end it." Beatrice Kanneh  Click To Tweet

Beatrice also spoke about her belief in education for all that can help build a stronger nation.

"Girls must stay in school and be educated. We must stop taking our girls from school to go to the bush and be cut. Instead, we should use the money to educate our girls. When you educate a child you educate a nation. This is our way… Click To Tweet

Mrs. Deddeh Karmoh from Lofa Rural Women was also part of the conversation. She shared the reason that she joined the campaign:

“I got involved in this campaign from the cross-border workshop we heard about in Foya. Because I am a human rights Advocate most especially for women and girls who are direct victims of this harmful practice. I gained more zeals from the facilitation and storytelling of participants. To make a change and save the lives of our women and girls in Lofa county.”

Deddeh expressed the need for international and government backing to help end FGM.

Tokpa’s story is quite remarkable, he has been working to help people in Voinjama for over 11 years. During that time he along with his local community built a radio station called Community Radio Kintoma 101.1MHz from scratch.

Tokpa is the group leader for Liberia who is passionate about helping those in need. He works closely with human rights issues in Liberia especially supporting those with disability and marginalised groups. Now the team leader for Liberia’s end FGM campaign.

When asked why he is joining the end FGM campaign he replied:

"The rights of our mothers and sisters have been violated. FGM is not in the Bible or the Quran." Tokpa M. Tarnue Click To Tweet

Tokpa expressed that this is difficult work and therefore has ideas to create effective jingles that can be played on the radio for the time being to allow this conversation to be introduced gently through the media platforms. Tokpa shares:

"It will take time, but we will make sure it will be abolished." Tokpa M. Tarnue #endFGM Click To Tweet

“My wife is very supportive. We will make sure we are heard. We both want to see FGM abolished.”

Some ideas to continue campaigning safely: