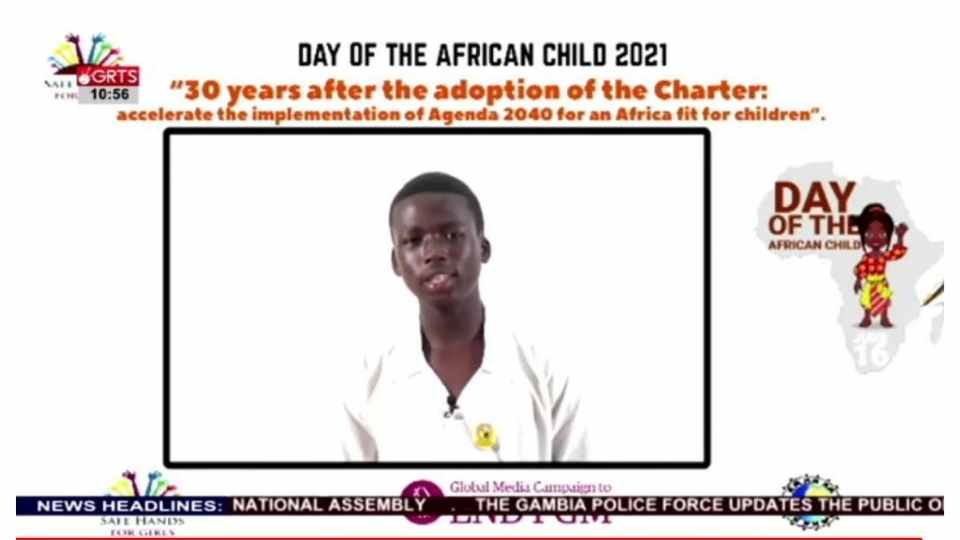 Lisa Camara is an Anti-FGM campaigner based in The Gambia. She describes in this report a recent FGM media campaign where speeches were given on TV to end FGM.

CNAG is a child-led, non-statutory body established by the Government of The Gambia through the Gambia National Assembly and the National Youth Council in partnership with UNICEF-The Gambia, Department of Social Welfare, Child Protection Alliance, Child Fund The Gambia, and National Youth Parliament with the ultimate aim to promote and advocate for the rights of all children as enshrined in the Convention on the Rights of the Child, the African Charter on the Rights and Welfare of the Child and all other legal instruments about the promotion, protection, and development of children in The Gambia.

SHFG in partnership with CNAG as the most vibrant and influential child-led organization in The Gambia granted 5 honorable members of the assembly the opportunity to be heard and listened to as right holders, by reading speeches on the Day of The African Child.

These speeches were pre-recorded and aired on TV and local radio stations to reach a wider audience and capture the attention of the Government, Policymakers, and development partners about their obligation to ensure that the rights of all Gambian children are respected, promoted, and fulfilled.

Honorable members of the Children’s National Assembly are giving life to the Day of the African Child Celebrations. I was sitting with my family and listening to the radio, hearing these children quoting provisions of our legal instruments especially the one on FGM. I never knew our FGM law was this strict about the practice. Moving on, I will ensure none of my children or female family members is subjected to this harmful practice.

One of the many strong messages that came out of our media project was how COVID-19 has created a surge in the cases of Sexual and Gender-Based Violence in The Gambia as some of the victims remain trapped with their abusive partners in observation of lockdown measures. Because a shadow pandemic of violence against women such as sexual violence has run alongside the Covid-19 crisis; as the world retreated inside homes due to the lockdown measures introduced to curb the COVID 19 pandemic, reports show an alarming increase in the already existing pandemic of sexual violence against women.

Other statistics show that 1 in 3 women have experienced violence, abuse, or harassment in their lifetime. Therefore, working on this media project has made us inclined to believe that this will have risen this year. This project has as well starkly highlighted the unavoidable truth- that sexual violence against women and girls is everyone’s business, and sparks enthusiasm for meaningful collaboration, shared learning, and stronger commitments to prevent the abuse.

Also, another strong message that came out of the media project from one of the members of the Children’s National Assembly of The Gambia is how the government is reminded of its obligation as the primary duty bearer to ensure it takes a leading role in the fight against FGM by bringing perpetrators to book as well as move from rhetoric to action in ensuring that the prevalence rate of FGM drops down.

If we were to carry out this activity again, we would ensure we also reach out to children in the rural areas and work with them to also air the recordings in radio stations upcountry. We believe rural children can do a lot in making sure they raise the awareness of their peers and parents and also hold the government accountable for their inactions as it relates to their commitments.