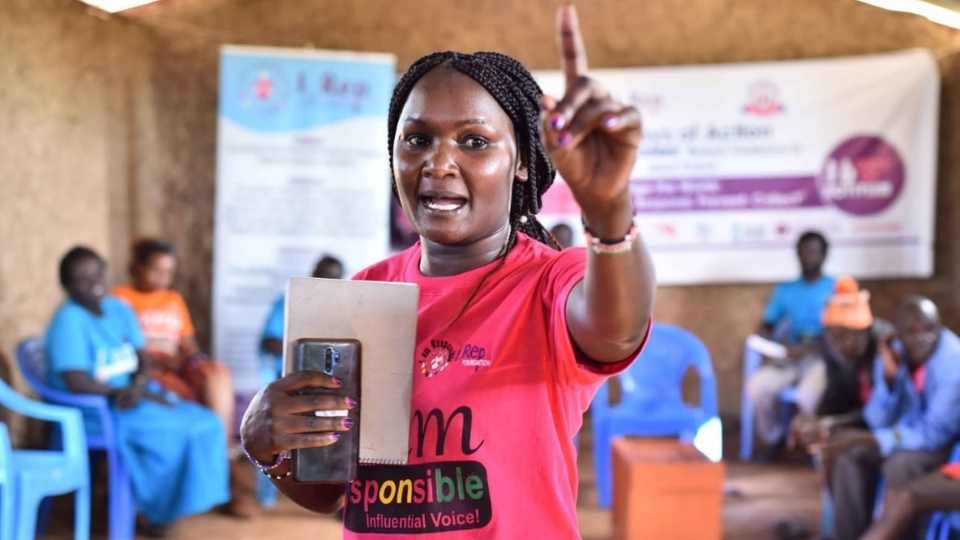 Do we get to see the real-life of a campaigner? The past few weeks we have been collecting stories about the dangers of campaigning against FGM in Africa. GMC works with campaigners across Africa including The Gambia, Kenya, Nigeria, Sierra Leone, Somalia, Ethiopia, Guinea, Mali.

All of which can pose threats to campaigners, for many different political, social, and structural reasons.

In this report we will get a close picture of what a campaigner faces, closing in on stories from a few campaigners that wanted to share how their work can often impose risks and threats to their safety. This report will inspire you, demonstrating the sheer bravery and strength of heart that is required of our campaigners to do this incredibly important work.

A chat with Domtila Chesang (a story not for the faint-hearted):

Domtila Chesang is a frontline campaigner. We had a chat with Domtila on the subject of the dangers of campaigning because she has experienced a lot over her years of outstanding work, saving hundreds of girls from FGM and Child Marriage. In her own words…

“I raise an alarm when there is an issue and I make a lot of noise on social media and I make the government see.”

Domtila has made a huge difference in her area, there are now villages in West Pokot that have been won over and no longer practice FGM. She also has 48 rescue girls and is a local and international champion, pushing girls to strive for education. Despite all her achievements, she’s very open about all the challenges that she faces.

“It’s not a walk in the park. You need to be bold, need not be a coward, need not fear. It hasn’t been easy for me.”

Domtila talked to me about how her work involves brushing shoulders with some perpetrators, community members, and political leaders. She explained that it is never a straight line in this campaign and that today you may be happy but the next you are crying.

“One girl is rescued and you get your energy back and then it happens again.”

Domtila explained that the work that she does can be dangerous and told a recent story of a girl who was taken to Uganda to be a child bride. There were powerful people involved and therefore this jeopardized Domtilas personal safety. Domtila is dealing with a culture that has seen many girls violently dragged out of their homes to be wives.

The cross-border issue is a hard struggle because once the girls have been crossed over to Uganda it becomes almost impossible to rescue them.

This is all very straining for Domtila sometimes she has to travel far to save the girls, then find treatment for them and follow up with the justice system, then find a school for them but the most difficult is having to keep the girls in her house which has now turned out to be a mini-safe house for victims of abuse. With no resources, she has to figure out how to help the children get back to life. Despite her struggles she perseveres:

I have more supporters than haters, I have political goodwill. I have just learned how to navigate around the issues … learning how to iron out problems without issues

She has good connections and relationships and therefore has the protection of the administration, county commissioner, and police. Sometimes having armed officers accompany her when the case is dangerous.

Domtila spoke highly of the Media and about how social media offers her hope and support.

“The fact I am bold and outspoken – my campaign is known county-wide. Social media has been like my shield as many will support me.”

I asked Domtila what she does to deal with such high pressure and life-threatening work. She shared that

“I cry, I speak out I don’t keep it to myself, I find something that makes me happy”

Some Communities disowning campaigners in koinadugu

Without government support, campaigners are less protected and feel the friction from the community.

Anti-FGM campaigner Abdul S. Conteh shares that there are many challenges that campaigners in Sierra Leone face from the community:

“In Sierra Leone we are not protected by the law because some politicians are not in support of ending FGM.”

According to Team Kenema…

Some time ago just after we came down from the radio, Kamboi Agriculture Radio FM 92.5 to sensitise people on FGM. The vice president of the Sowies also went on the same radio telling the general public

“We have signed with the president of the Republic of Sierra Leone that when a girl reaches the age of 18 years, and she is ready to undergo the cut, they can go ahead with initiation. Don’t listen to the campaigners. All the women on the radio that have talked about ending FGM are not society women, that is why they talk about FGM”

Vice President of the Sowies

Community members threaten us, they came to my house,

Sometimes callers and people who send text messages do send threatening remarks against us.

“Some radio station managers don’t allow us to use their medium for fear of those initiators. Getting our guests to speak on FGM issues is too challenging, as some decline at the eleventh hour.”

“Some people don’t even want to rent us their bikes, as soon as you tell them about the nature of the program we are going to organise.”

The media is giving campaigners a safe way to use their voices :

“It is almost impossible to go anywhere now, physically. I wouldn’t want to put my volunteers at risk or myself. The rate of kidnapping, banditry, and abduction is alarming, unfortunately, the government is unable to address the security situation. The only way to campaign now is either online or using traditional media like radio or TV”