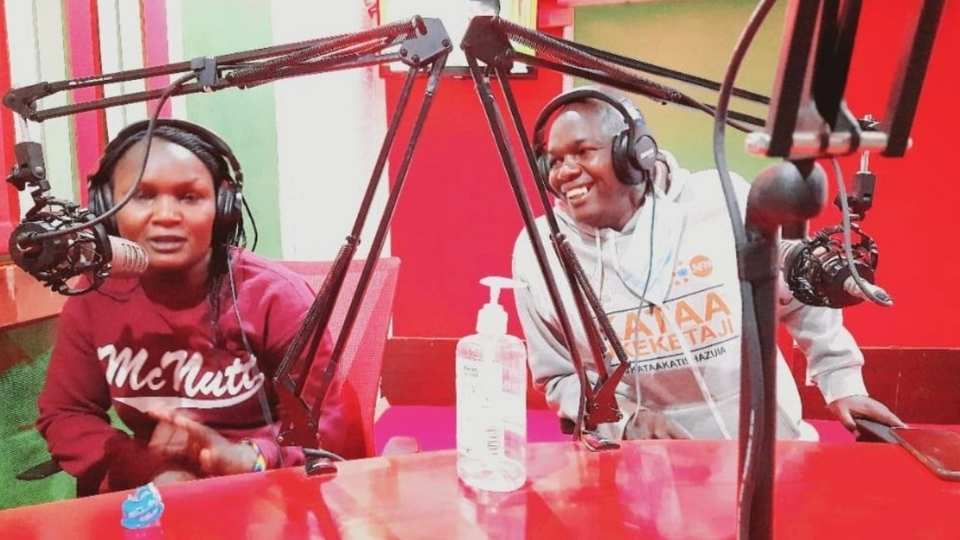 Anti-FGM campaigners Raymond Sikamoi and Domtila Chesang discuss the laws against FGM, speaking about how it’s a human rights issue and therefore is illegal.

Raymond Sikamoi and Domtila Chesang attended a one-hour talk show on North Rift radio to sensitize the community on the effects of FGM and the rampant secret FGM cutting among the Pokot community in Baringo County.

East Pokot in Baringo County is where the prevalence of FGM is still high and being practiced in most parts in broad daylight. They still believe that FGM is part of their culture and should pass from generation to generation. The Prohibition of FGM Act passed by the Parliament in 2011 that declared FGM as an illegal practice raised a lot of debate.

Few were opposing while the majority applauded the move saying that it will cut the rampant cases of FGM and forceful marriage. Some who opposed cited that the majority of the community members don’t understand the law and they feel that FGM is like one of the rites of passage of girls into womanhood and no replacement.

The major reaction was sensitizing the community on the new laws to ensure they are enlightened. A recent High Court ruling in Nairobi by a three-judge bench was cited by Domtila to emphasize the illegality of the practice.

Communities must stand together!

Raymond Sikamoi who has extensive information on Pokot culture narrated the negative effects of FGM and strongly condemned those practicing terming it as awkward and barbaric culture. He urged fellow Pokot men to marry ladies who are not cut as one way of eradicating FGM since they are the main consumers.

He also urged fellow men to join the campaign against FGM and promised to recruit more activists into the journey of ending FGM. The talk show managed to reach an estimated population of 450,000 people from the Pokot community living in both Baringo and West Pokot counties.