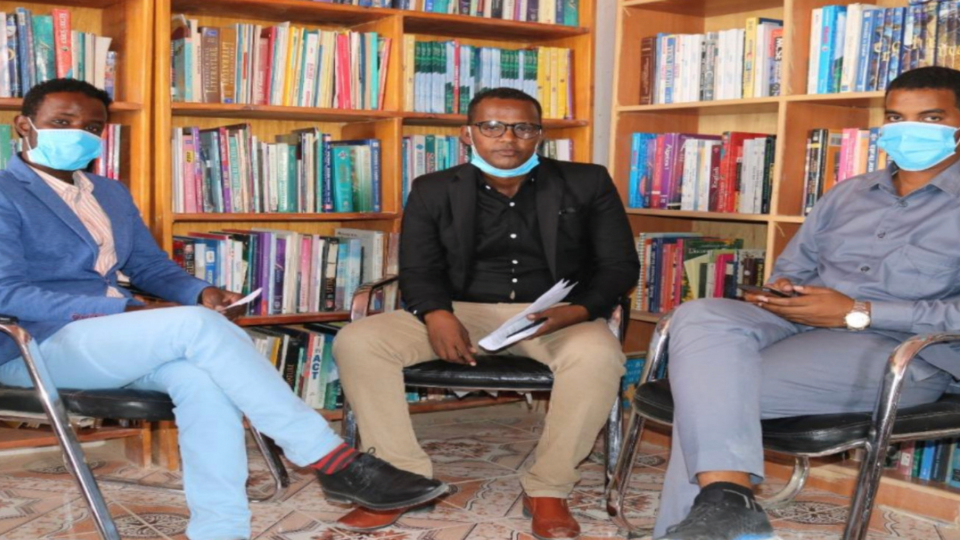 Asia Abshir is a GMC Media graduate and Anti-FGM activist. Here he is working to engage more men in the campaign against FGM, especially journalists.

In this day and age of the 21st century, is it recognized that voice is empowerment. Women and girls either shy away or lack the platform to present their grievances directly to decision-makers, the proposed media campaign programme will highlight the harm of performing Female Genital Mutilation (FGM). The opportunity to raise awareness as in imposing experience of self-worth which this campaign anticipates realizing.

Through both video and audio programmes, the public can get to be sensitised to issues deeply affecting them. Producing both audio and video programmes aired on Radio, at the same time shared on both YouTube and Facebook pages in social media.

This is so that the programme could reach a wider audience. The selected program aimed to analyze the role of male journalists and how they can help end Female Genital multination/ FGM. We also discussed how the other males can serve the public independently according to this issue problem to eradicate it from the roots. This issue is counted sensitive and it is not easy for males to discuss it publically but male journalists, religious leaders, and male doctors are involved more than the un-professional male. These are often the very issues that impede community advancement.

In pursuit of raising the level of awareness of the community are critical issues such as Female Genital Multination, rights of girls, gender-based violence, harmful traditional practices, humanitarian protection, and public health.

The activity we carried out seeks to complement the bigger vision of FGM zero tolerance in Somalia.

The activist’s overall objective is to strengthen Puntland community awareness enhancing girl’s rights that contribute to realising zero tolerance of any kind of FGM. Building a resilient and accountable community in Puntland. The specific objective is to discuss the role of male journalists in raising awareness and eradicating FGM through media in Puntland Somalia.

Objectives of the Program :

Who engaged with my show program and why

We engaged only male journalists to support their media ideas with male roles that can enhance the opportunity of social awareness against FGM. There is an urgent need to reframe FGM in the media to highlight and share positive stories about ending FGM.

With this programme, I engaged individuals with a journalists background and with activism background that can acting great collaborating power against FGM practice through Puntland state community awareness.

Recording the video program
The team recorded the video in a library to attract both uneducated and educated people to confirm them FGM is not related to any science and religion while using a high-quality modern camera and other audio equipment to record.

After the organized and produced both audio and video programmes we have presented through Radio Sahan and via space of the targeted audience. After aired the program by Radio and shared the video program via the internet.

Here are some quotes about the programme:

“Somali people have been practicing FGM for a long time. Most of the places where it happens are in the countrysides or rural areas. I recommend the establishment of mobile vehicles to spread awareness in these areas.”

“Finding male journalists is very important to avoid this widespread problem facing our Somali girls, and I suggest that men play a major role in raising awareness and not just women, and fight together, together we can win”.

“Male journalists knew about the real situation in the country sides more than anyone, they are traveling a lot, they have to find out how to circumcise and talk about it, they must know why old ladies who have been circumcising for a long time are doing that”.

“The role of male journalists can be divided two: Mostly males are traveling between rural and urban areas, at that time they can raise awareness about FGM issues through various media such as the radio and they can also convey their message verbally by mouth.”

To engage men is very meaningful, men do not engage this issue by themselves, they feel like the FGM programme isn’t relating to them. They are not ready to talk about their own stories and negative stories about FGM or whatever stories related to them.

I encourage more programs to reach out. The more we raise the awareness, bringing together different background professionals of the community to discuss the dangers of FGM is increasing understanding. It is spreading the negatives from FGM.

Curriculums are more important for social development, to put this topic (FGM) in a curriculum will be huge, and this step can allow young girls to understand well the harmful and the negative side of such traditional practice vagina cutting/FGM.

We have completed all the tasks contained in the activity in the predetermined timeframe and specifications. We are very confident that upon airing this audio/video program show, it will make a tremendous positive impact and would convey the ideas intended for. We are very sure that the messages in the programme will contribute to a raised awareness in the community. We also hope that this will also create lively, engaging, informing, and productive social media debate and community discussion about FGM especially male journalist’s involvement.