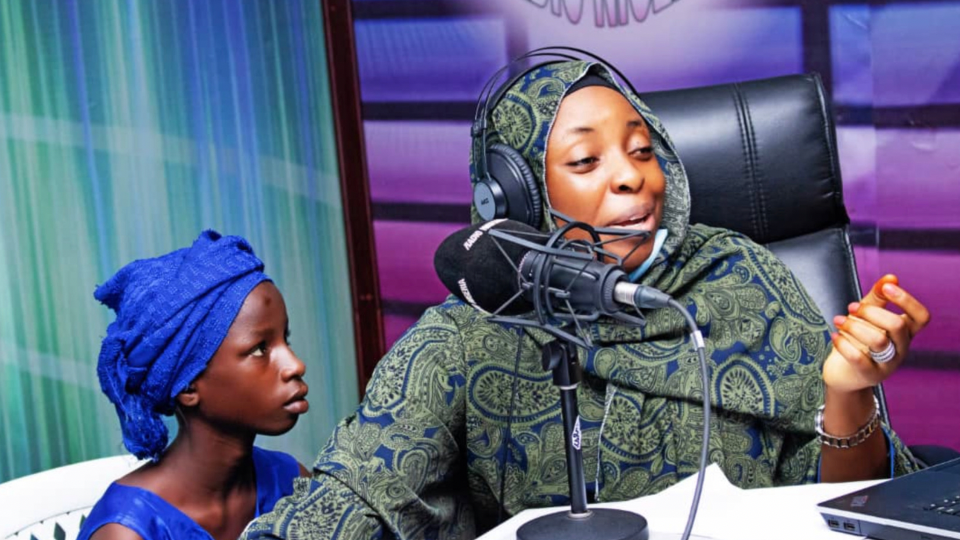 The live studio appearance was held on 12th June 2021, which is also the democracy day in Nigeria. It is also the International Day Against Child Labour. The media project was a pidgin English radio program. It focused on promoting adherence to existing laws to end FGM and educating almost 18 million people spread across 5 states and communities on the negative effects of Female Genital Mutilation. It is important to engage trauma and mental experts, religious leaders, and youths in advocacy. Radio is the most effective way to reach a wider targeted group in the local language.

This was the first sponsored activity to be hosted on Armed Forces Radio. It is very important to create awareness on air to quickly arrest this ugly trend. It created massive publicity and further enhance the good work GMC are doing to end female genital mutilation globally, highlighting ongoing work in communities with high prevalence, and how religious leaders, traditional leaders, advocates, and media can all work in harmony to change mindsets.

The Day of the African Child:

The Day of the African Child is marked every year on the 16th of June to celebrate African Children’s achievements and to raise awareness about their plight and lobby for the accelerated right to education, love, and care they

Emmanuel Ojeifo is a priest of the Roman Catholic Archdiocese of Abuja, a trained journalist, and a socio-political commentator. He serves as personal secretary to Cardinal John Onaiyekan and assistant chaplain at the Chapel of Lux Terra Leadership Foundation, Abuja. He writes on issues on religion and politics in Nigeria’s national newspapers. He holds degrees in philosophy, theology, religion and politics, and religion and science.

“We need to partner with all relevant stakeholders to campaign for an end to the harmful practice of FGM. Religion doesn’t support FGM.”

Dough Mchiaga-Tsavsar is a conversationist who has carved her way into the world of decorative throw pillows. She studied Economics at Ahmadu Bello University, Zaria, and has an interest in human behavior, especially Emotional and Mental Health. Her ability to converse encourages many to open up to her. She is also a trained trauma specialist. Her latest book “See the world with new eyes” is a collection of true-life stories which seeks to teach self-help to people who seem paralysed, helpless, or defeated from events in their life.

She spoke about the harmful effects of FGM on the mental health of the survivors. She also said it can also cause depression and stated several other adverse effects associated with FGM Survivors. She called on the relevant authorities, to enforce existing laws criminalising FGM and ensure speedy prosecution of offenders to serve as a deterrent to others.

Favour Godwill is a writer-poet and girl child advocate. She is 21 years old and a recent graduate of human anatomy from Cross River State, University. Young, vibrant, audacious, and fiercely outspoken, Favour hopes for a gender-equal society, where women can live freely and make informed choices about their bodies, career, and other functional skills needed to reach their full potentials.

Favour focused her contribution on her classmates who were FGM survivors and how it affected them psychologically when they were students in school. She advised parents not to cut their daughters and to seek help immediately if they need to.

Eavy Dee is an On-Air Personality at Armed Forces Radio. He is also an officer of the Nigerian Airforce. He demonstrated how education and diplomacy can help to end FGM. He related a real-life scenario of his neighbor and how they were able to convince the mother of the baby girl, her mother, and the mother-in-law not to cut the little girl. He emphasized the need for continuous advocacy in all local languages.

We also produced and aired jingles to support the media campaign.

At the end of the radio session, all the guests received an honorarium. It was an excellent opportunity for the guests and presenter to showcase and mobilize action towards gender equality and showcase what we can all do collectively and individually. We must prioritise child rights and strengthen policies that protect the African Child, and that can be done only through the instrument of legislation and deliberate policy implementation.

We must also ensure existing laws and policy frameworks are child-friendly to allow for participation so that more girls are given the same opportunity as their boys. Federal Character should not only be about the state, religion, or region, to ensure fairness and equity, it must be gender friendly. We can’t keep excluding an essential part of our society and their resources and expect maximum development.

The event was supported by the Global Media Campaign to end Female Genital Mutilation (GMC).