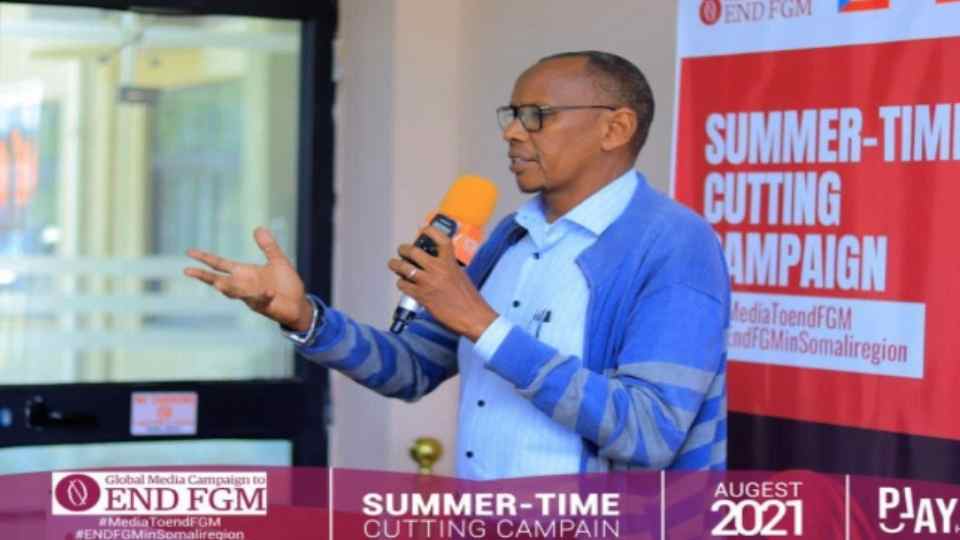 Shucayb Obsiye is a media campaigner and focal person of the Global Media Campaign in Somali Region Ethiopia. Obsiye is based in Jigjiga and works Horn Cable TV has organized a half-day Consultative meeting for the regional Bureaus to finalize the draft FGM Fatwa to end FGM in Somali Region.

Shucayb Obsiye presented the welcome speech and welcomed the attended guests from the concerned bureaus to the consultative meeting and discussed previous activities and programs conducted by GMC with the help of the Somali Region Supreme Islamic Affairs Council, independent Fatwa Committee, and other partners.

Obsiye as Focal person of the Global Media Campaign who was the commentator of the program once again discussed the role of the media campaign to end FGM in the Somali region and efforts to eradicate FGM and other harmful traditional practices conducted to the young Somali women who are the victims to save them from this disaster.

Sheik Junayd Secretary-general of the Somali region Supreme Islamic Affairs council who was speaking on behalf of the director-general of SRS Supreme Islamic affairs Council officially opened the consultative meeting and deeply addressed the trends of FGM problems in the Somali Region and efforts that the supreme Islamic Affairs council conducted about ending FGM in Somali region with the help of partner offices like Bureau of women and children affairs and Global Media Campaign.

Sheik junayd deeply discussed the efforts conducted by the Supreme Islamic affairs council to get a basic written draft FGM Fatwa which was prepared by an independent committee from the scholars of the Somali region. When the draft Fatwa is finalized it will be legal regulation or proclamation which will be implemented by the legislative bureaus like Police Commissions, attorney general, and justice bureau as well as supreme sharia court after it is ratified as basic regulation or proclamation from the regional parliament.

Dr. Akil talked about a summary note about the right of women in Islam and how the Islamic religion honored human beings including women and recited Some verses in the Holy Quran about the rights of the Women; and how it is very hard to violate their rights such as:

Dr. Akil discussed FGM and Its problems for females and defined FGM as harming or hurting female genitals which are conducted almost more than 27 countries in some middle east and African countries that was started a very long period.

Dr. Akil mentioned some of the main articles in the draft Fatwa which he stated as follows:

Why FGM is conducted or what are the main causes of FGM?

Does FGM have an impact on the spouse’s destruction?

Yes, it has an impact on the spouse’s destruction especially in some other Middle East countries like Egypt which is caused by lack of sexual satisfaction from the men to use drugs or sexual enhancement tablets.

Sheik Nur talked about what Islam says about FGM and the Islamic region and sharia deeply discussed about FGM and in detail talked about the honor Islamic religion gave to the female, which the almighty Allah and his messenger tell us in the Holy Quran and hadiths like:

Therefore, finally, the independent committee suggests that to finalise this draft Fatwa needs support, budget, and collaboration from the concerned offices.

“Firstly thanks to the Global Media Campaign and Supreme Islamic Affairs Council for inviting us to this consultative meeting about finalizing FGM draft Fatwa to end FGM in Somali Region.

If I say something our role as police is to ensure that when the fatwa is changed into legal regulation or proclamation ratified by the regional parliament to implement and monitor how and where it was implemented and where it is not implemented.

“…And we are ready to play our role using the legal basis of the Islamic fatwa to take the people who violate the rules into courts and take them to prisons.”

“I am encouraging the independent committee who started this draft Fatwa to finalize it because we will get a legal base to implement the law and punish the criminals who are accustomed to conducting this harmful practice.

I am advising the concerned offices and officials who prepared this draft Fatwa to be the implementers of this regulation and not to violate because as police commission tomorrow we will start from you if you don’t implement the rules in your homes and we will monitor how and where the rules implemented and where not implemented.”

Sheik Ahmed stated that he was very happy to see the concerned offices come and sit together and discuss one of the problems in the community, which is the various health and psychological impacts of FGM on the young Somali victim girls in the Somali region and Africa in general.

As sharia court, they are ready to do everything on our side and be the side of our partner offices any time and everywhere we can do our role to end FGM.

Ahmed Abdi Aden from the General attorney and justice bureau

Mr. Ahmed expressed that he is sending a very warm welcome to the concerned offices attended this consultative meeting and arguing to finalize the draft FGM Fatwa and changed it into a proclamation ratified by the regional parliament and as a general attorney and justice bureau we are ready to take our role to finalize the draft Fatwa.

Mrs. Saynab First thanked the organizers of this consultative meeting to end FGM in the Somali region and the independent committee who prepared this draft FGM Fatwa.

As BOWCA we mainly emphasize conducting mass awareness about harmful traditional practices with the help of the partner organization both NGO’s and GO’s because Somali people need to get deep information and knowledge about the problems of FGM religiously and scientifically.

This fatwa and programs like this need to reach all Somali region districts, Kebeles, and sub-kebeles in the remote areas to get enough awareness about the health impacts of FGM.

Finally, she expressed that they are ready to support and be hand in hand with our partners and do whatever we can do about ending FGM in the Somali region.

To move forward with the finalization of the Act on the Elimination of Female Genital Mutilation. The Independent Committee those were preparing the fatwa recommends the following steps.

1. The Independent Commission strongly welcomes the commitments made by the Somali Regional Offices at the consultation forum.

2. The reorganisation of the sub-committees of the Somali region zones and districts which were formerly the issuers of the fatwa.

3. That the independent committees prepare a fact-finding study to finalize the draft fatwa on female genital mutilation

4. To obtain a financial outlay of $ 100,000 which is equivalent to 5 million birr in Ethiopian currency which will ensure a speedy accomplishment of the final draft Fatwa.

5. That the partner offices to the bureau of the Supreme Council of Islamic Affairs are needed to assign and submit experts who advise on the issuance of the fatwa.