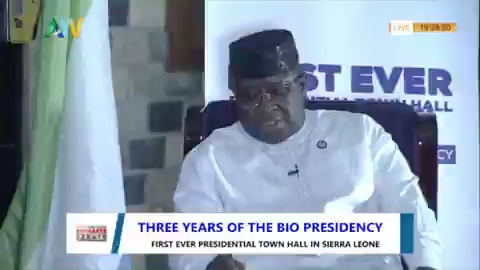 Sierra Leone’s President, Julius Maada,   says he believes that FGM will end in 10 to 20 years but calling for its immediate eradication would be “Political suicide”.

His most recent statement came from his first public town hall meeting – and was in response to a direct question from a journalist,  asking if he was ready to witness FGM.

Anti-FGM campaigners say that outlawing FGM for those under 18 was not sufficient.

“All forms of FGM need to be banned immediately,”  according to the veteran FGM campaigner, former government minister,  Ragiatu Turay.

The President’s wife however has said  publicly that the ceremonial circumcision of girls by the influential Bondo society (secret society of circumcisers) should end.

Educated in the UK,  Fatima Maada,  the 42-year-old wife of the President,

Said that while,  the traditional pre marriage training of the Bondo Society in the ways of womanhood remain – but without “female circumcision.”

The reforms are necessary to strengthen girls and women in Sierra Leone. Besides, the First Lady said that every girl has a right to education because it is a fundamental human right.”