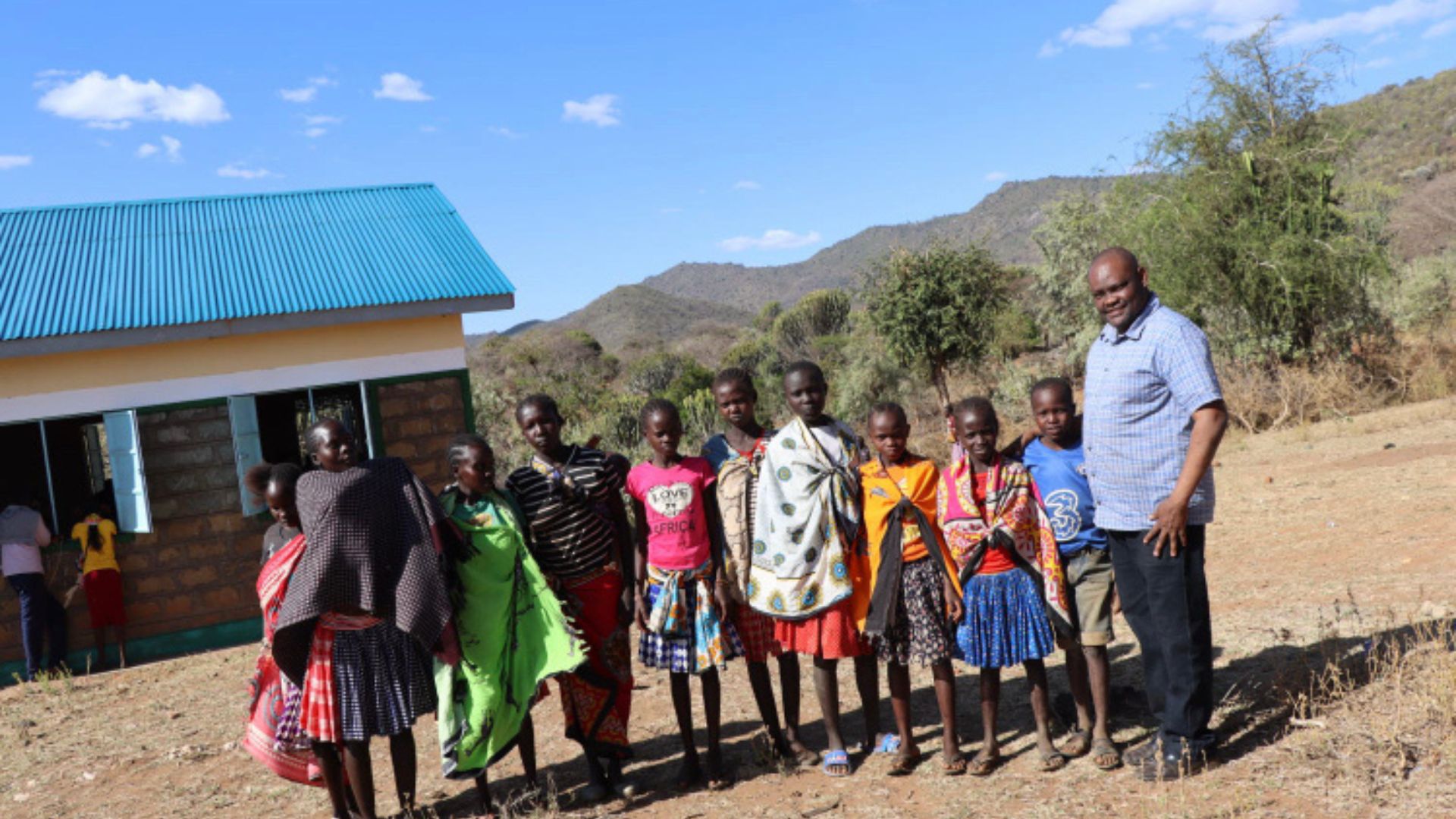 This is the write up of an interview between Ambrose Merian (End FGM Campaigner) and Ruth Harley (GMC Website News editor) : on Tuesday 17th January at 1500PM. This interview made it possible to zoom in on all the work that Ambrose has been doing over the December 2022- January 2023 period to save girls from FGM.

Ambrose Merian is one of the Thirteen GMC funded campaigners over the this cutting period (December 2022- January 2023) in Kenya.

Preparation for the Interventions for the December – January FGM cutting period (Strategic Organisation):

We received our grant from GMC on Tuesday 6th december. To start I held a meeting with local teachers, chiefs and health workers in the area. We asked ourselves some important questions to identify the areas and challenges that this region has to enable us to focus our attention. After looking through our answers we made plans to focus on the following areas of Pokot North :

We also set strategic decisions to strengthened our team. We knew to safe as many girls as possible it would be important to strengthen the capacity of the surveillance team. We decided to avoid using chiefs and teachers for this information as we need reliable trusted information : names of the girls, numbers, the location of the house. That is why we decided to use Community Health Workers (CHV’S) these are reliable individuals that live in the remote villages and each looks after seven households each. This way the information and location of cases of planned FGM, could be on time and accurate allowing us to intervene.

We allocated Airtime to the CHV’S so they could reach us by phone as and when they needed to alert us to a situation in the village.

The CHV gave us informed us promptly with reliable information:(Names of the girls and parents)

Together the CHVs, the area chiefs and Nyumba Kumi (leaders in charge of ten household) – had to work together fast to intervene.

This was an organised event. Girls cut being prepared to be cut in a outhouse called a Kraal (This is a temporary structure that is slept in when shepards are travelling across the land to with their cows). The team arrived on the location with the chief who spoke to the parents, explaining that FGM is against the law and reminding them of the penalties that they will face if they cut the girls. Despise the intervention and reminder of the law, some parents insisted they wanted to continue with the ceremony. Because these girls were not safe this is when we made sure to rescue them.

“13 out of the 23 girls were taken to Kauriong children home.”

Once a girl is taken to a rescue home, the job of the surveillance team and chiefs is not over. They work hard to educate the parents and relatives on the dangers of FGM.

“Today 9 of these girls, who had been taken to the rescue home, have been reunited with their family’s and their parents have agreed that they will not cut their girls. The girls will only go back to their family’s when it is safe to do so.

Surveillance team made aware and intervened – some of the parents remained hesitant – after 2 hours of intervention – parents of 9 of the girls did not agree with suveillance team.

23 girls (aged between 9-15) were being prepared to undergo FGM.

“The surveillance team intervened. 5 of girls parents were hesitant and so the girls were taken to – Ale Primary – boarding school and rescue centre. They are still there and will now enroll to this school which is close by to the towns Police station.”

Three out of five girls underwent FGM on a Highway. Two of the girls were saved but the girls were swiftly taken to Uganda when suvillence team arrived to cover the incident, there have been no arrests so far, but the chief is speaking to goventment in Uganda and local chiefs across the border to find the girls and the parents.

The cutter : comes from Woyakol village she was arrested on the 25th December, 2 days after an incident were some girls previously cut and taken across the border.

Three of the parents of the girls that were cut were also arrested and the case is ongoing. There is a need to trace the girls as they crossed to Uganda swiftly… because of the lack of evidence the case is not complete.

The Cutter comes from Tippet village – Endough ward. She was arrested on the 29th December – caught with two girls – aged – 12 & 13.

The two parents were also charged but the girls are confessing they cut themselves so the investigation is ongoing.

Some of these areas very hostile, they have no roads and no police posts nearby. The work of a campaigner can be very dangerous. Therefore the rescues need to be handled in a cultural sensitive way, working with religious leaders and chiefs to save the girls.

“In Pokot culture 9-15 year-olds are seen as ripe for marriage. A man aged over 60 can marry, and the older the man the more cows a family gets in exchange for their girl child.”

“It is normal to see a girl ages 13 with two children already, and by the time she is 20 she is considered an old lady.”

Forced marriage and sex (rape) is also a norm for these young brides who normally have children very young. Young men are used to hold the girls down so that the old husbands can have sex with the girls.

“Immediately after a girl has grown breasts – she will be married.”

The girls are either cut before marriage or cut in labour (FGM).

In these remote villages over 90 percent of girls do not go to school. In some areas the village will only have one primary school and one medical centre. Some have never even touched a vehicle, and police vehicles cannot access these remote areas. Slowly improvements are being made to these areas as we are seeing interventions such as ect – early childhood development centres being built.

“It is also really commendable to see some educated local young ladies encouraging their communities to send girls to school. These young ladies become role models – leading the way – they are bright girls -some girls we rescued 10 years ago.”

“Some of the girls did so well on their primary exams and have been emitted to the best schools in kenya, we just need to raise funds to help get the girls there!This is our challenge!”

Although the grant for the December 2022- January 2023 period small it really assisted us in saving girls. We saved a total of 98 girls and over saw 7 arrests. I really appreciate GMC and I look forward to more engagements for these remote areas, the girls very much need it!

We will save one girl at a time!